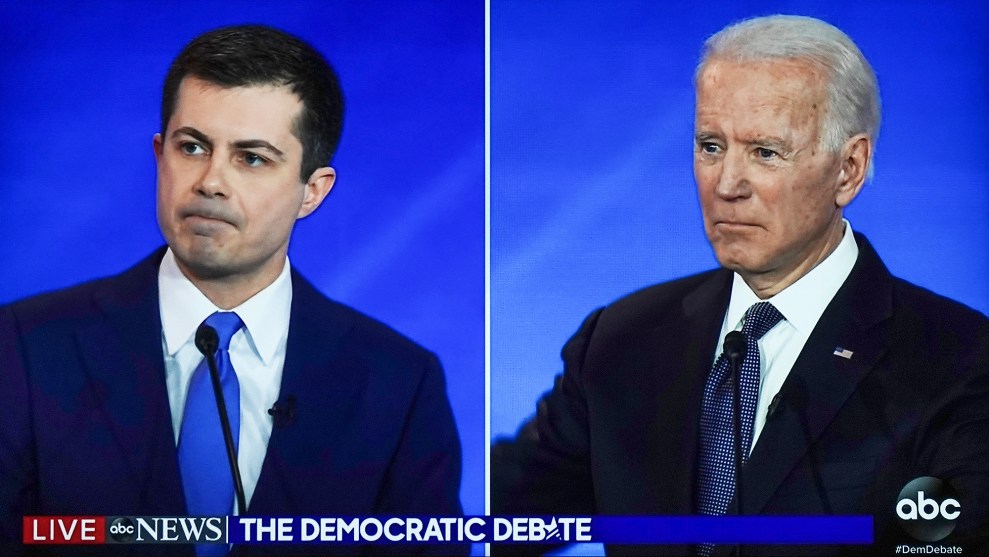 As Joe Biden looks on, Pete Buttigieg says anyone who would "weaponize a son against his own father" is a dishonorable person.ABC News

Hmmm. I’m a little unsure of what I think about tonight’s debate. Pete Buttigieg got a lot of time (or seemed to), though I’m not sure precisely what points he wanted us to come away with. His defense of Joe Biden was very good, though. I’d show you a clip, but ABC News won’t let me.

Amy Klobuchar generally did well, and her final wrap-up was really good. I groaned a bit when she started with an FDR anecdote, but she turned it around into something very effective.

Joe Biden was clearly more animated and forceful than before. This is . . . probably good for him? Yes, probably.

Bernie Sanders was his usual self.

Elizabeth Warren was also her usual self.

The climate change discussion was a huge disappointment. The moderators blew it by linking it with NAFTA 2.0, which turned the whole thing into a tedious discussion about whether climate should be a part of America’s trade treaties. I mean, sure, that would be nice, but it’s practically meaningless given the scope of the problem. When will someone start asking climate questions that require the candidates to truly discuss the size of the problem; how we’ll get the rest of the world on board (“Paris” isn’t near enough); and what it will require from taxpayers?

The discussion of race was equally dispiriting. I’ll concede that it’s a genuinely difficult issue, especially in 60-second chunks, but these folks have had months to come up with their answers. Why can’t they do better?

Overall, then, I’m going to say that the debate probably helped Buttigieg. The attacks on him were mostly about experience, and Americans have shown over and over that they don’t really care much about that. Biden and Klobuchar did well and may have picked up a bit. And I suspect that’s about it.

Well, I forgot that tonight’s debate started at 5:00 here on the West Coast. I picked things up about 20 minutes in, as the candidates were mostly arguing about how we all need to come together and crush Donald Trump. Let’s dive in.

10:25 pm – Steyer agrees with Bernie, but also tosses in a mention of Republican attacks on unions. Then he spends some time telling us what a dick President Trump is.

10:22 pm – Klobuchar says she has a plan based on a National Academy of Sciences report. It includes preschool etc. Then she delivers an emotional and effective mini-speech about how much she cares about people who have trouble paying the rent, trouble finding a job, and so forth.

10:21 pm – Sanders says the reason we have lots of child poverty is because we give huge tax breaks to corporations and the rich. Needless to say, that will change if Sanders becomes president.

10:19 pm – Biden is very convincing that he cares about kids, but he doesn’t offer much of a plan.

10:08 pm – Commercial break! We’re having a rousing debate about whether anyone on the stage actually disagrees with anyone else. I’m on “Team No Differences That Actually Matter Since Republicans Are the Gating Item Anyway.”

10:05 pm – Just stop it. Now Steyer is talking about how trade policy gives us leverage to force other countries to fight climate change. This might—might—address about a tenth of one percent of the problem. Unless you’re talking about something that has a chance of reducing carbon emissions by at least five percent or so, just STFU.

9:58 pm – Wait. Donald Trump is considering an executive order that would “establish a classical style, inspired by Greek and Roman architecture, as the default for federal buildings in Washington”? I missed that. I hope we’ll get a chance for everyone to weigh in on this tonight.

9:46 pm – Warren hauls out a tiresome old trope: we talk and talk about racial issues but it’s time we finally did something about them. The first part of this is something that could have come straight from Rush Limbaugh’s radio show, and the second part condemns past Democrats for never doing anything for minority groups. But the problem here is not that Democrats never do anything; the problem is that it’s genuinely difficult to pass legislation aimed only at blacks and Hispanics. You can target assistance to the poor, which has a disproportionate benefit for minorities, but there’s a hard limit to how much you can explicitly discriminate either for or against minority groups.

9:37 pm – Buttigieg talks about eliminating prison sentences for drug possession. Great! But in the federal courts, a grand total of 213 people were incarcerated for simple possession in 2017. And my guess is that some of those were more serious charges that got pled down. In any case, contrary to myth, incarceration for simple possession is not a problem at the federal level. (It’s a bigger problem at the state and local level, especially for pretrial imprisonment, but there’s a pretty limited amount that a president can do about that.)

9:29 pm – Now Buttigieg is talking about reforming the Supreme Court and adding members to it. This is ridiculous. Where exactly does he plan to get the 60 Senate votes he would need to do this? Or does he think Democrats will eliminate the filibuster if they win control of the Senate?

9:05 pm – Commercial break! My initial impressions are (a) Buttigieg is getting a lot of time, and (b) someone advised Biden that he needed to amp up his speaking style. Apparently his poor performance in Iowa convinced them that playing the calm, experienced statesman wasn’t working.

8:55 pm – Apparently none of the Democrats would have killed Qasem Soleimani. But nobody mentioned the New York Times piece suggesting that Iran wasn’t responsible for the attack that started the spiral of retaliation in the first place.

8:43 pm – Biden thanks Buttigieg but then calls for a big round of applause for Lt. Col. Alexander Vindman, who Trump fired today. And he got it. Mitt Romney got a round of applause too. But what about poor old Gordon Sondland? He testified against Trump and got fired too.

8:41 pm – Buttigieg is asked if Democrats should be reluctant to nominate a person whose son is under investigation. His answer: “No.” What’s more, “anyone who would seek to weaponize a son against his own father” is an “incredibly dishonorable person.” It was a nice answer.