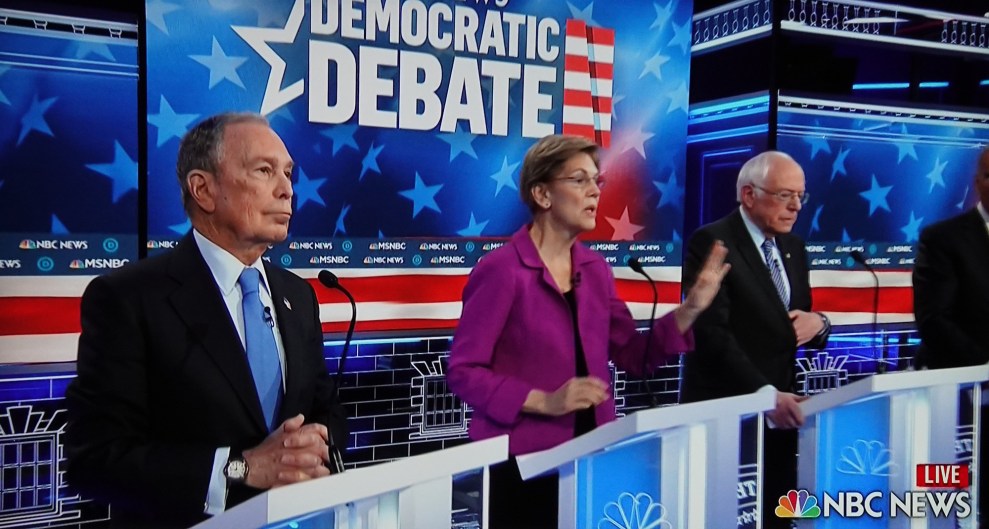 Obviously the big addition to this debate was Mike Bloomberg. So how did he do?

My take is that he did fine. I don’t think he blew anybody away, but the attacks on him were so scattered that he mostly came through them unscathed. That’s really all he needed: to look like a plausible candidate without so much baggage that he had no chance of winning.

Elizabeth Warren struck me as sounding a little desperate tonight. Amy Klobuchar spent too much time getting into fights without coming out a clear winner. Joe Biden was more strident than he was in the last debate, and I doubt it did him any good. Bernie Sanders took a couple of hits, and for a brief moment I think we saw a preview of what the attacks on him might look like in a general election. His fellow liberals generally don’t attack his socialist past much, but Bloomberg did and, I think, did some damage even with just a minute or two to do it.

So who won and who lost? I’d say Bloomberg clearly won, simply by seeming credible and not taking so much fire that he melted down. Sanders might have swayed a few people, but he also might have lost a few. Buttigieg’s approach may not appeal to me, but it’s possible that he gained support by seeming above the fray and always in control of himself.

The Nevada caucus is on Saturday! Stay tuned.

10:53 pm – I’m not sure why, but this debate has really hammered home how tired I am of Pete Buttigieg’s speaking style.

10:52 pm – Closing statements. Bloomberg says, “This is a management job.” He’s said this before. Is it a good line? Regardless of whether it’s correct, I’m not so sure. Most people don’t think of the presidency as merely a “management” job.

10:46 pm – Chuck Todd wants to know if the candidate with a plurality should automatically win the nomination. Nobody thinks so except for the one guy who’s most likely to have a plurality. (That would be Bernie Sanders.) Everyone else wants to keep the rules we started with.

10:44 pm – Klobuchar to Buttigieg: “You haven’t been in the arena. You’ve just memorized a bunch of talking points.” Buttigieg responds with his usual faux outrage about somebody allegedly dissing small-town mayors

10:39 pm – Why is the word “actually” so popular among candidates who are on a debate stage? The context is always “I actually supported _____ ,” meaning that it’s something they supported in the past, not a flip-flop of some kind. But it comes across as “Isn’t that a surprise?!?”

10:36 pm – Bloomberg seems like he thinks everyone else on the stage is just unbearably naive.

10:32 pm – Commercial break! Hey, I didn’t know this debate was being held at the Paris hotel. That’s where I stayed on my little trip to Arizona last month. Here’s a picture from the window of my room:

10:29 pm – Sanders is taking more hits than Bloomberg. This makes sense. Bloomberg might be rich, but Sanders is the frontrunner.

10:26 pm – With the conversation now focused on taxes and socialism, Bloomberg seems to have perked up. He’s in his element.

10:25 pm – Bloomberg on Sanders: “Our leading socialist is a millionaire with three homes.” This actually seems to have brought Sanders up short.

10:22 pm – Bloomberg: The fastest way to re-elect Trump is to have this conversation. “It’s ridiculous. We’re not going to get rid of capitalism. We tried that, other countries tried that. It’s called communism and it didn’t work.” The stage fills with groans.

10:20 pm – Sanders unwinds on billionaires. Nobody should make that much money when there are so many poor people around. Chuck Todd asks Bloomberg if he deserves all the money he made? “Yes. I worked hard for it.”

10:17 pm – Bloomberg goes after Sanders for complaining about taxes: “Who wrote the tax code?”

10:16 pm – Question for Bloomberg: did the end of redlining bring on the Great Recession? That’s a dumb question that completely lets Bloomberg off the hook for what he actually said.

10:12 pm – Warren decides she has to bring up environmental justice. Sure. This has zero to do with addressing climate change, but I suppose it’s good for Warren.

10:10 pm – Now Buttigieg weighs in with a bunch of yada yada about climate change.

10:09 pm – Bloomberg wants to sound the alarm on climate change, but his flat affect destroys his message. He sure doesn’t sound very alarmed.

10:06 pm – I get that Vanessa Hauc thinks she’s being aggressive with her follow-ups, but she’s really just being argumentative.

10:04 pm – Warren asks why we can’t get climate bills passed. She provides two reasons: corruption and the filibuster. That is . . . not a very sophisticated argument.

10:01 pm – Warren says her plan for climate change is to “increase by ten-fold our investment in science…most of the stuff we need hasn’t been invented yet.” Hooray! Maybe she read the current cover story in Mother Jones?

9:57 pm – Bloomberg gets a chance to brag about closing coal plants. This is strong ground for him.

9:52 – Commercial break! Man, things started off hot and they’ve stayed hot. It’s pretty obvious that everyone understands there’s not much time left in this campaign. My take so far is that Bloomberg has come through unscathed. The rest of the field is spending so much time interrupting each other that no one has been able to mount a sustained attack on him.

9:49 pm – Klobuchar gets a question about not knowing the name of the president of Mexico. Buttigieg goes after her hard. The moderators try to move on, but Warren jumps in to defend Klobuchar. Biden closes things off to say that not only does he know the Mexican president’s name, he’s the only person on the stage who’s actually met with him.

9:45 pm – Bloomberg supported George W. Bush! Bloomberg opposed an increase in the minimum wage! By spraying all the criticisms of Bloomberg across a single ten-minute period they’ve really let him off the hook. Bloomberg has produced quickie answers to all of them and now it’s over.

9:44 pm – Biden is being even more aggressive than in the last debate. I thought that was probably a good strategy, but the poll numbers sure didn’t back me up. We’ll see how it works this time.

9:43 pm – Will Bloomberg release everyone from their NDAs? Nope.

9:40 pm – Is Bloomberg a misogynistic jerk? Suddenly all of Bloomberg’s weak points are being brought up at once.

9:38 pm – Why hasn’t Bloomberg released his tax returns? Bloomberg: I make a lot of money all over the world, so it takes a while. This actually seems fair.

9:34 pm – So far I don’t think anyone has really dented Bloomberg much. At the same time, Bloomberg has mostly just defended himself in a fairly dull monotone. That’s safe, I suppose, but not likely to broaden his support.

Incidents went down in Bloomberg’s final year in office by 75 percent, but as Biden said, this was under pressure from the Justice Department. UPDATE: The reduction came after a judge approved a class-action suit in 2012.

9:27 pm – Stop and frisk! Bloomberg says it’s the one thing he’s embarrassed about from his term in office. “It got out of control.” But then he cut it by 95 percent. I’m pretty sure that’s completely bogus….

9:25 pm – Bloomberg finally gets a question: Is he a fan of Obamacare? He tries to claim that, in fact, he was in favor of it at the time.

9:20 pm – Sheesh. Everyone is too busy taking shots at each other to take shots at Bloomberg.

9:08 pm – Buttigieg: In a couple of weeks we could find ourselves stuck with one candidate who wants to burn this party down, and another who wants to buy it.