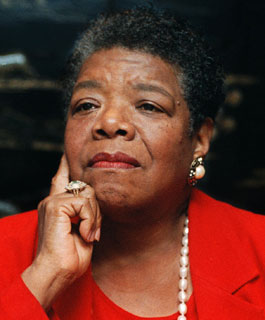 Maya Angelou speaks in the lilting cadence of the dancer she was trained to be. She moves with the sure grace of the poet she was born to be. She laughs with crackling exuberance, as she did during our interview–the first time she has talked about President Clinton since his inauguration–and with her low, resonant, emphatic voice she fills the room; it overflows.

Transcendent as an actor, teacher, playwright, civil rights activist, and much more, Dr. Angelou is a potent mix of the spiritual and the earthy.

Q: Two years later, does President Clinton embody the same vision for America as the man whose inauguration you electrified with your poem “On the Pulse of Morning”?

A: I think he does. I think of him as an “innocent abroad” [laughs]. I think he thought that being president was going to be a step up from being governor of Arkansas–that is an innocent abroad! Clinton is the same man. He has paid dearly for some lessons.

Q: What should he do in the next two years?

A: He’ll have to take more chances. I think Clinton, after getting into office and into Washington, was shocked at being bludgeoned. So he spent time trying to be all things to all people–one way guaranteed not to be successful or respected in a lion’s den. You can’t just play around with all those big cats–you’ve got to take somebody on.

Q: Under the “Contract With America,” conservatives are trying to eliminate federal funding for the arts. What does that portend for our cultural life?

A: It portends a desert. An arid expanse, where nothing is fertile, nothing is growing, nothing is sustaining, and nothing is nurturing. Those plans might go into effect, but I don’t think for very long. I pray not.

Q: How should artists and writers respond?

A: Artists must work to banish this contract, and artists will do it. The conservative right has decided that artists are apart from the people. That’s ridiculous! I mean, at our best the writer, painter, architect, actor, dancer, folksinger–we are the people. We come out of the people, and remain in the people.

What we ought to be doing is singing in the parks, talking to children, going to gatherings of parents, doing whatever it is we do–dancing, reading poetry, performing–all the time, so that people know, “These artists are my people–you can’t kill them, you can’t stop them.” We then re-establish our footing with the people. All artists must do that, or we will be defanged.

Q: Does the conservative threat to artists affect your work?

A: My own work is not threatened, financially. But the spirit from which my work comes is forced into a corner. When younger writers and poets, musicians and painters are weakened by a stemming of funds, they come to me saddened, not as full of dreams and excitement and ideas. I am then weakened and diminished, and made less rich.

Q: How does spirituality fit into the American way of life?

A: Somehow, we have come to the erroneous belief that we are all but flesh, blood, and bones, and that’s all. So we direct our values to material things. We become what writer Beah Richards calls “exiled to things”: If we have three cars rather than two, we’ll live a little longer. If we have four more titles, we’ll live longer still. And, especially, if we have more money than the next guy, we’ll live longer than he. It’s so sad.

There is something more–the spirit, or the soul. I think that that quality encourages our courtesy and care and our minds. And mercy, and identity.

Q: Does embracing spirituality allow you to be an optimist, who can undespairingly ask, as you do in one of your poems: “Why do black children hope? Who will bring them peas and lambchops and one more morning?”

A: Those black children are the bravest, without knowing it, representatives of us all. The black kids, the poor white kids, Spanish-speaking kids, and Asian kids in the U.S.–in the face of everything to the contrary, they still bop and bump [snaps fingers], shout and go to school somehow. And dare not only to love somebody else, and even to accept love in return, but dare to love themselves–that’s what is most amazing. Their optimism gives me hope.

Q: You think the spirit of youthful optimism will let today’s kids rise above the violence on the streets?

A: Yes, and rise above the oblique and direct negligence.

A: When the human race neglects its weaker members, when the family neglects its weakest one–it’s the first blow in a suicidal movement. I see the neglect in cities around the country, in poor white children in West Virginia and Virginia and Kentucky–in the big cities, too, for that matter. I see the neglect of Native American children in the concentration camps called reservations.

The powerful say, “Pull yourself up by your bootstraps.” But they don’t really believe that those living on denuded reservations, or on strip-mined hills, or in ghettos that are destinations for drugs from Colombia and Iraq, can somehow pull themselves up. What they’re really saying is, “If you can, do, but if you can’t, forget it.” It’s the most pernicious of all acts of segregation, because it is so subtle.

Q: A generation after the Civil Rights Act, how much progress has America made in the fight against racial discrimination?

A: We’ve made a lot of progress–it’s dangerous not to say so. Because if we say so, we tell young people, implicitly or explicitly, that there can be no change. Then they compute: “You mean the life and death and work of Malcolm X and Martin King, the Kennedys, Medgar Evers, Fannie Lou Hamer, the life and struggle of Rosa Parks–they did all that and nothing has changed? Well then, what the hell am I doing? There’s no point for me to do anything.” The truth is, a lot has changed–for the good. And it’s gonna keep getting better, according to how we put our courage forward, and thrust our hearts forth.

Q: If you were a 16-year-old today, what would you be doing to find your place in a world that can seem so bleak?

A: Well, we recover–and this sounds almost preachy–by each one, teach one. Or, each one, teach ten. Elimination of illiteracy is as serious an issue to our history as the abolition of slavery.

Q: The importance of literacy in schools often gets less attention than the controversy over prayer in schools. Should a prayerful moment be a part of school curricula?

Q: Describe how you link spirituality to God–why is God so crucial to your life?

A: The most delicious piece of knowledge for me is that [pauses] I am a child of God. That is so mind-boggling, that this “it” created everything, and I am a child of “it.” It means I am connected to every thing and every body.

That’s all delicious and wonderful–until I’m forced to realize that the bigot, the brute, the batterer is also a child of “it” [laughs]. Now, he may not know it, but I’m obliged to know that he is. I have to. That is my contract.

What fascinates me is the varying ways we approach God. And shape God and paint God, make a statue of God. It amazes me. Once I went to Texas to a conference called “Facing Evil.” At one point, some fellow from Texas got up and said, “I really have seen evil, I have felt its force. I went to Germany and I went into the concentration camps.”

I stood and said, “Do you mean to tell me that we’ve come from all over the world and we’re going to talk nonsense? You had to go to Germany, you here in Texas who refused Mexican-Americans a chance to vote, you who don’t want them to even live next to you, you who have your own history of slavery–you had to go to Germany? I don’t wanna hear it.”

It seems to me that if we accept–if I accept, anyway–the fact of evil, I accept the fact of good. We’re all doing what Anne Sexton calls “that awful rowing toward God.” That excites me. It gives me incredible delight to be alive, and prepares me with as little fear as possible for death. It remains that I live a very nice life, most of the time.

Q: What do you think of marriage–both as a religious sacrament and as a state-recognized institution?

A: [long pause] Well, what can I say–them that likes it, it’s OK [laughs]. I mean, I’m married. But I’ve always resented the idea that a stranger can tell me and another person that it’s all right now for us to cohabit. I’ve married many times against my will, because the man wanted that. But two honorable people can be together with respect and love and laughter as long as it lasts. Laughing together or reading the Sunday paper and arguing over the Newts-of-the-world.

I married a man once because of something he said. We were in England, and somebody said that women should always expect to be raped if they wore very short pants and low decolletage and acted “fast.” So this man, whom I knew slightly, said, “If a woman has no panties on and sits with her legs wide open, no man has the right to assault her. When a guy tells me, ‘I couldn’t resist because she did sit in such a provocative way,’ all I want to know is if four of her brothers were standing there with baseball bats, would they have resisted?” [laughs]

Q: You married him after he said that?

Q: So as we approach the millennium, how can progressives take back the political agenda?

A: Courage–that’s what we need. And insouciance–a wonderful word. Combine it with courage, and there’s a remedy of hope. We may be heading toward new and exciting confrontations. We’ll be obliged to come out of the varying closets where we’ve hidden ourselves for the last few decades [laughs]. Those of us who submitted or surrendered our ideas and dreams and identities to the “leaders” must take back our rights, our identities, our responsibilities.

Ken Kelley is a freelance writer for national magazines.