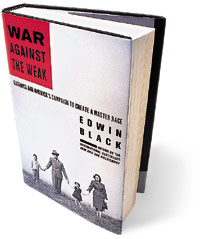 Adolf Hitler didn’t think much of the United States, but during his rise to power he repeatedly singled out one aspect of American life for praise: our eugenic policies. In Mein Kampf, Hitler applauded America’s exclusionary immigration laws. He carefully studied American laws allowing sterilization of the “unfit” on eugenic grounds. He even wrote fan letters to leading American eugenicists, telling Madison Grant, for example, that his book The Passing of the Great Race was his “bible.”

In recent years, historians such as Daniel Goldhagen have made a cottage industry of finding new ways to blame Germans for the Holocaust. Black, by contrast, keeps finding new ways to put the onus on Americans. His last book, IBM and the Holocaust, traced how Big Blue encouraged Nazi Germany to use its punch-card technology, a tool that became essential for classifying — then exterminating — Hitler’s subjects. Now, War Against the Weak offers a fierce, compelling, overlong account of how American ideas helped inspire — if that’s the right word — Hitler’s Reich.

Eugenics was born in England; Francis Galton coined the term, which is Greek for “well born,” in the 1880s. But it was Americans who put into practice Galton’s theory that society should encourage healthier people to have more children and unhealthier ones to have fewer. Alarmed by increased immigration and by the huge native black population, America’s elite discovered in eugenics a “scientific” basis for their belief in white, Northern European supremacy. So at the turn of the 20th century, scientists with a can-do spirit and just enough knowledge of Mendelian genetics to be dangerous devised grand schemes to improve the American “protoplasm”: They would segregate, sterilize, and perhaps even murder those deemed “un-fit” — as much as 10 percent of the population.

This was not some marginal cause. American eugenicists persuaded the Harriman, Carnegie, and Rockefeller families to fund a vast eugenic campus at Cold Spring Harbor, Long Island. Researchers were dispatched to asylums, prisons, hospitals, and poor towns to collect family histories of the supposedly unfit — which included the mentally ill, the disabled, epileptics, alcoholics, criminals, the immoral, and pretty much anyone else they wanted to throw in. These reports were then collected at the Eugenics Record Office.

Throughout the ’20s, eugenicists pushed draconian immigration restrictions through Congress and persuaded most states to pass laws permitting the sterilization of the unfit. The Supreme Court laid the capstone on these laws with the notorious 1927 decision in Buck v. Bell affirming the sterilization of an unwed teenage mother. Drawing on statements of pro-eugenics medical personnel, the court decided not only that Carrie Buck was feebleminded (she wasn’t), but that her daughter was clearly doomed to abnormality (she wasn’t). The supposed incapacity of Carrie Buck, her mother, and her infant daughter inspired Justice Oliver Wendell Holmes’ famous conclusion: “It is better for all the world, if instead of waiting to execute degenerate offspring for crime, or to let them starve for their imbecility, society can prevent those who are manifestly unfit from continuing their kind…. Three generations of imbeciles are enough.”

Eugenic sterilization, rare before Buck v. Bell, became commonplace. Eventually America would sterilize more than 60,000 citizens based on shoddy pretenses, including supposedly voluntary operations on children. Black prints the transcript of how one child “consented” to sterilization:

Americans gleefully exported their eugenic activism to the world. Sterilization laws sprang up throughout Northern Europe. German eugenicists, particularly captivated by the American notion of Nordic supremacy, published textbooks based on American ideas; Hitler read them. The Rockefeller Foundation funded eugenic experiments in Germany through the early 1930s. Black doesn’t try to claim that American eugenics created Hitler’s evil: Rather, he says, American science allowed Hitler to medicalize and sanitize his hatred, making it palatable for a mass audience.

When Hitler took power, he immediately unleashed American-influenced eugenic policies on Germany. He established eugenic courts — modeled on ours — but quickly outstripped his American models. Sterilization led rapidly to the outright murder of the mentally ill. Then, married to anti-Semitism, eugenics devolved into genocide.

War Against the Weak is well told and extraordinarily sad. It represents a prodigious feat of reporting, as Black has trolled every archive and read every letter (and published excerpts from far too many of them). And it is a very persuasive book, except perhaps on one count. Black, in his effort to convict Americans as Hitler’s accomplices, may overstate our role in the German genocide. He notes but does not emphasize that as early as the 1920s, many Americans were protesting eugenic policies. When the Nazi scalpels started flying in 1933, American scientists — with the exception of a few hardcore racists — abandoned the creed. The Carnegie Foundation halted its recordkeeping project. While America committed violence in the name of eugenics, it never got close to murder. It’s telling that Black can find only one really damning quote from an American supporting Nazi eugenics — “Hitler is beating us at our own game” — and even that dates to 1934, before Germany’s worst crimes. Once they saw what the Nazis were doing, most Americans wanted no part in the game at all. They had the good sense to be embarrassed at what America had done, but their shame was too little, too late.