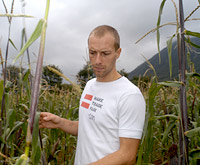 It may be true that rock and roll and agricultural trade barriers don’t mix. But even though Coldplay’s Chris Martin doesn’t sing about fair trade, that hasn’t prevented him from becoming the cause’s most visible front man.

The 26-year-old Martin writes searing love songs and haunting ballads. His band has twice won the Grammy for Best Alternative Album, and, as the readers of Us Weekly know only too well, he dates Gwyneth Paltrow. But Martin has chosen not to live inside the bubble of success. Radicalized by a trip to Haiti he took with the relief agency Oxfam, he’s taken up the cause of Third World farmers impoverished by World Trade Organization mandates that require developing nations to allow cheap, subsidized American and European crops to flood their markets, while their own exports remain thwarted by First World trade barriers.

While touring during the past two years, Coldplay gathered more than 30,000 signatures for Oxfam’s fair-trade petition. And last summer at the WTO summit in Cancun, Mexico, Martin delivered the petition—signed by nearly 4 million people—to the head of the organization.

When he started down this activist path, Martin says, “I felt like a third-rate Bono…. Hopefully, it’ll escalate until I feel like a full-on Bono.” Martin spoke to Mother Jones from London, deflecting questions about Coldplay’s new live DVD and focusing the conversation on fair trade, saying, “I don’t want to plug anything except this.”

Mother Jones: What was your first experience as an activist?

Chris Martin: Probably a “Drop the Debt” event in London. The great thing about “Drop the Debt” is that you have Bono and [Radiohead’s] Thom Yorke and all these high-powered musicians actually going inside the buildings where decisions [about Third World debt] are made. I’m not sure how much George Bush is swayed by 100 people standing outside his house. I’m sure he’s more likely to be influenced by one person having a meeting with him.

MJ: Even if that one person is a musician rather than a head of state?

CM: You can obviously question the power that musicians or actors have, because they don’t really have any political power. What they do have is some effect on public opinion. And politicians like to be seen with those people. It makes them look more trendy and hip. It’s all kind of farcical, really, but people like Bono understand they can get their causes across by allowing someone to have a photograph with the singer of U2.

MJ: You’ve called your experience with Oxfam a “crash course” in fair trade—

CM: They approached us two years ago just as we were making our second album and said, “Do you want to come to Haiti and learn about fair trade?” And we were like, “Fair what?” We hadn’t any idea about it. But you go on a trip and learn how the importing and exporting of goods around the world works, and you realize it’s a huge crisis. We’ve now seen, firsthand, the problems caused by America dumping rice on Mexico, or Haiti not being allowed to export its agricultural products.

MJ: In looking online at your recent journey to Mexico, I saw a photo of you behind a plow. When that was being taken, did you feel self-conscious?

CM: One hundred percent. I know full well that you have to kind of whore yourself around. But we don’t care about looking like idiots. We’re well aware that we do—we look totally stupid standing behind a plow. But that doesn’t matter as long as you get the four words “make trade fair dot-com” in the newspaper.

MJ: When you met with Dr. Supachai Panitchpakdi of the WTO—

CM: I just call him Dr. Supa Chai—what a great cup of tea!

MJ: Were you nervous?

CM: No, I wasn’t nervous. We’re not saying we’re the only ones that want fair trade. We’re just participating in a band that some people like—that’s how we have the profile to get into that meeting, and then to present a petition that says millions of people feel exactly the same as we do. I don’t feel like it’s all on our shoulders. It’s just the same as when you see, I don’t know, Britney Spears advertising Pepsi. We’re just advertising maketradefair.com. I’m confident in the product we’re advertising, so I have no need to be nervous.

MJ: I know that when you met Dr. Supachai, you said, “You seem like a nice guy. Why is it so hard to get this problem sorted out?” How did he respond?

CM: He said it was going to be difficult. The great thing about the Cancun summit was, although it fell apart, it fell apart because the poorer countries are coming together and making a stand for themselves. What will come of that I don’t know, but it’s better than them just being walked over again.

MJ: Have you changed your life since you became an advocate for fair trade? Are you a big coffee drinker, for instance?

CM: No, I don’t drink coffee or tea. I do eat a lot of sugar, and chocolate. I’m sure I’m being a hypocrite every time I eat a chocolate bar. I’m eating products that have been imported cheaply or wearing shoes that probably weren’t made in England. The problem of unfair trade is rife.

MJ: I know you’re young, but you probably remember Bob Geldof’s efforts to feed the world. What impression did that make?

CM: I was really young. I remember hearing about “Live Aid,” but I didn’t really know what it was. Obviously, I know about it now and think it’s unbelievable. I wish we could do something like that now. All the bands, like Eminem and 50 Cent, they’re so powerful, those guys, they could really do something huge.

MJ: Coldplay Live 2003 is your first live DVD—do you feel you’re a better live band or a studio band?

CM: I feel we’re a better studio band. Some days I think we’re shit at both; other days I think we’re great at both. But we couldn’t have one without the other. At the moment, all I want to do is be in the studio all day, every day. But I’m sure in a year’s time, we’ll be itching to play live again.

MJ: As a child, was there an epiphany when you thought, “I will be a musician”?

CM: One when I was about 11: I’d just
started playing the piano one day, and this song came out. I don’t know where it came from, but I said, “Wow! That was pretty cool!”

MJ: Did you go to university to study music?

CM: I went to London to find people to be in a band with. I majored in ancient history.

MJ: But you had no illusions about becoming an ancient-history teacher?

CM: That was my real dream, but then Coldplay came about! [Laughs.] Actually, I spent three years just rehearsing. But it is cool to learn about the Roman Empire. In the future they’ll be unearthing statues of George Bush!

CM: No, I’d consider us a band interested in certain aspects of politics because it affects us just as much as it affects everybody else. I don’t want the Third World to become the Fourth World any more than anybody else does. That’s the one thing about when you actually visit a place where there is immense poverty: You see the reasons why, and it makes you fucking angry. Because it’s just going to come back and haunt America and haunt England if they—if we—don’t do something about it. This is tremendously clichéd stuff. But unfortunately it’s all true.

MJ: Organizations like PETA seem to delight in stirring controversy. Do you think being more controversial would help you in your quest for fair trade?

CM: You don’t want to piss off the people who actually make the decisions. The more you aggressively protest, the more they will up their defenses.

MJ: You’ve often said that when you meet people who are responsible for these harmful trade imbalances, they seem to be decent people. Is that a conundrum for you?

CM: Yes, it’s a conundrum. I’m sure if we met George Bush tomorrow, he’d charm the pants off us. But we’d just have to try to charm them off him, basically. I think that good things will happen through charm offensive.