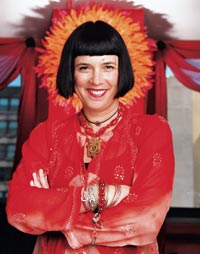 It’s hard not to admire a woman who looks you straight in the eye and says with a beatific smile, “I love the word ‘vagina.’” Yet if you’re familiar with Eve Ensler’s work, the statement hardly comes as a surprise — her play The Vagina Monologues has, since its first staging in 1996, become a phenomenon in the worlds of both theater and feminism. Every year around Valentine’s Day, activists worldwide mount V-Day benefit performances to raise money and awareness to stop violence against women. Ensler’s most recent Monologues spin-off has been the “V Is for Vote” campaign, which registers single women and pressures politicians to make ending the abuse of women a central — rather than special-interest — issue.

Meanwhile Ensler’s new one-woman play, The Good Body, shifts the focus north by inches, taking on post-40 belly sags, spreading hips, and other bodily “imperfections.” In a series of vignettes, Ensler adopts the role of a teenager at fat camp, a bride transformed by her plastic-surgeon husband, and even former Cosmopolitan editor Helen Gurley Brown. The play’s literal navel-gazing suggests that women’s obsessive attention to their outsides diminishes their potential to create larger change in the world.

Mother Jones spoke with Ensler after The Good Body’s world premiere in San Francisco; it opens on Broadway in November.

Mother Jones: Do you think you’ll ever get sick of vaginas?

Eve Ensler: No. You know we’ve had such an impact in the last seven years with V-Day. We’ve raised $25 million, we’re everywhere in the world, we’re growing. And we’ve had some amazing victories.

There’s a woman, Agnes Pareyio, in Kenya, who I met five or six years ago. She had been genitally mutilated as a child, and had made a decision to stop it. She had devoted her life for eight years to walking from village to village on foot, educating boys and girls and mothers and fathers about the dangers of FGM [female genital mutilation]. In her eight years, she stopped 1,500 girls from being cut. When we met her, we said, “What can we do for you?” She said, “Well, I could use a Jeep.” We got her a Jeep. Forty-five hundred girls. Then we got her money, and she opened the first safe house in Africa. Two months ago, she was elected deputy mayor of Nura. And there’s a good chance she’ll become the mayor. That, to me, is my vision of V-Day. She said, “I am winning. I won this election because of the work I did in stopping FGM.” That, to me, is the dream.

MJ: With things like genital mutilation going on elsewhere, do you think violence against women in the U.S. gets overlooked?

EE: I think violence against women in America has become ordinary — it’s been made absolutely acceptable. Battery and rape are such a part of the framework of our culture that we don’t see them as outrageous. Just even trying to get candidates to talk about violence against women, it would be like getting them to talk about air. It’s so basic, and how do you get people to see that it’s extraordinary and unacceptable?

MJ: Let’s talk about The Good Body. Many of the ideas of body image in the play—like Cosmo and fat camps—come from a very American place. But isn’t part of your point that those have become the world’s idea of bodily perfection?

EE: You go anywhere in the world and you see how we’ve exported this idea of what women are supposed to look like, and it’s having a devastating impact.

I think what all of us have in common is that we’ve been taught and trained and programmed to focus on fixing and mutilating ourselves. That’s a core reason why women do not have power in the world. It’s this huge distractor. It’s gotten us off the path. The only way you can undo it is by looking at the insanity of the obsession of it.

How do we, as a culture, stop buying in? I think activism is the cure — the more you focus on people who are really in need, the harder it is to hate your body. I think it’s a huge antidote.

MJ: Doing research for the play, did you find anyone who said, “You know what? I love my body!” and were confused about your intentions?

EE: I didn’t find many women in this country who liked their bodies, I have to tell you. I actually found a woman who said, “I love my body.” I said, “Really?” She said, “Well, I hate my face.” [Laughs.] I thought that was the funniest thing I’d ever heard. She didn’t even get that that was a contradiction. I’m doing this play to say, “Do the most radical thing you can possibly do — love your body, and get on with it.”

MJ: How did “V Is for Vote” get started?

MJ: When you say center of everything–

EE: We are the majority of the population, we raise the children, we keep the culture and the communities together, our bodies give birth to the future. When you’ve been violated, you don’t feel a future in your body, so you translate that to your children. Society just breaks down.

MJ: Do you worry that slogans like “Vote Your Vagina” could marginalize the cause?

EE: I believe in irony. And if V-Day has taught me anything, it’s that if you go out with artistic, outrageous irony and humor, people are drawn to it. Look, who would have ever thought, seven years ago, that a play called The Vagina Monologues would be done in 76 countries, with 35 translations, in places like Karachi and New Delhi and Cairo? And if they don’t have a sense of irony, I think, “Good, let people get a little shaken up by the Vagina Vote.”

MJ: Do you ever get frustrated by people who claim we live in a postfeminist world?

EE: I don’t even know what that means, “a postfeminist world.” Did we die?

MJ: It’s the idea that feminism happened, and that anything we ask for on top of that is just so much bellyaching.

EE: Well, first of all, that we’re “bellyaching” implies that we’re demanding something from someone — as opposed to living in the equal world.

MJ: But that’s the way feminism is still understood in the world.

EE: Well, there’s a reason for that! Patriarchy has a great spin on it and keeps that spin on it in order to make feminism not as powerful and palpable as it could be. You know, those muthas, they know what they’re doing! [Laughs.]

MJ: What would be the ideal outcomes of The Good Body and V-Day?

EE: There are two things going on. There’s the violence that comes toward us, and there’s violence we do to ourselves — we’re picking up the magazines, we’re dieting, we’re getting the lipo. Why are women immobile? Because so many feel like they’re waiting for someone to say, “You’re good, you’re pretty, I give you permission.”

The first seven years, The Vagina Monologues and V-Day were about stopping violence from outside, and part of that was empowering ourselves so we know we weren’t deserving of that violence. This new piece is about loving our bodies. We have to give ourselves permission, and live with the determination that people may not like us for it — but so what? We’re going to move forward anyway.

MJ: Are you optimistic about the future?

EE: I think of Agnes Pareyio becoming mayor. Or I look at India, where we’re opening a sanctuary in Himachal Pradesh where they can be safe from abuse. And I think, “What more would I want to be doing in this life?” And I don’t get tired, because every time a woman doesn’t die or doesn’t get beaten or doesn’t get raped or doesn’t get honor-killed or doesn’t get acid-burned, it’s a huge victory. And you know, I find that aspect of it particularly thrilling, and I find the world horribly depressing. And so both of those live together every single minute.