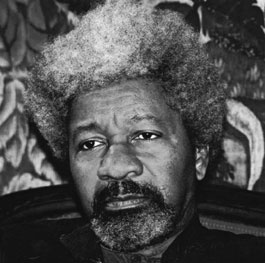 “I am a glutton for tranquility,” says Wole Soyinka. The 72-year-old Nigerian writer claims he would like nothing more than to retreat to his childhood home and spend his days in seclusion. But peace and quiet have long eluded Soyinka, who spent decades in the thick of the fight to restore democracy to Nigeria, eventually going into exile in 1994 during the reign of General Sani Abacha. In his new memoir, You Must Set Forth at Dawn, he recounts the paradox of being both a private artist and a compulsive activist, a split that is embodied in the Yoruba god Ogun, whom Soyinka invokes as his protective deity. “He could be such a peaceful person,” he explains, “yet he could go to war at a pinch.”

This creative tension has inspired a prodigious career: hundreds of poems, more than 20 plays, two novels, dozens of essays, and an earlier memoir, Aké: The Years of Childhood. In 1986, he became the first African to receive the Nobel Prize in literature. Taking a moment from a busy American book tour, Soyinka sat down to talk over lunch, insisting on a plate of plain pasta, which he then sprinkled liberally with red pepper flakes.

Mother Jones: You had to wear various disguises when you were in exile. Like what?

Wole Soyinka: Some of them were not so comfortable. I was Ahmed, the diamond merchant from Sierra Leone. Another one was Rasta—heavy, heavy Rasta. Another time I had to dress up with a turban like a Malian, with that distinctive kind of headgear with the thing around the mouth, because obviously I have a problem with two aspects: my hair and my beard. [Laughs.]

MJ: So you never considered cutting the trademark hair?

WS: No, mostly because it would take a while to grow it back. My hair also became a symbol for some groups.

MJ: What compelled you to write this book? You had said that you wouldn’t write another memoir after Aké, and yet here you are.

WS: There is something really horrific for any human being who feels he is being consumed by other people. I’m talking about a writer’s critics, who don’t address what you’ve written, but want to probe into your existence and magnify the trivia of your life without any sense of humor, without any sense of context. You feel as if you have an incubus permanently perched on your shoulder. I said, “Look, I’d better say something so that other people have something against which to measure what these assiduous scribblers who call themselves critics have to say about me.” The other reason was that we were plunged once more into a situation of internal strife, and I wasn’t sure if I was going to come out of this alive or not. Most people, when they are about to embark on something in which the end is uncertain, they tend to want to set something down, if only for future generations to understand why people like me would willingly forfeit their ease just to be thrown back into an uncertain situation.

“The idea of having to make constant reference to politics is anathema to my calling as a writer. There is not a special imposition on writers to be activists. All that does is encourage writers to write propaganda.”

MJ: Along the way, you got to know some of Nigeria’s military dictators personally. You wrote that interacting with someone without scruples is “irresistible.” Is this just personal curiosity, or is it the writer saying, “Hey, this is a great character”?

WS: It’s probably the writer in me. It intrigues me—on the one hand they are capable of such childlike niceness, childlike eagerness, eagerness to be approved, to be loved, and yet can be so sadistic and so unscrupulous, so filled with the capacity for treachery. I admit it’s a warped sense of fascination.

MJ: Did your interactions give you ideas on how to combat them?

WS: Yes, of course. Studying them made it very easy for me to anticipate them. I think I did pretty well in my ability to foresee what they would do; I’d say I got it right up to 85 percent of the time. It was very easy because all of them had a fascination for—and a fear of—the intellectual world. I had this relationship with them of enormous respect from their side, an eagerness to win my approval. I just had to be very cautious, because they were dangerous!

MJ: How are your activism and your art connected? Does one drive the other?

WS: I don’t know. My best definition is that they are Siamese twins that cannot be operated on or they will die.

MJ: Chinua Achebe has argued that African artists have an obligation to be political. What do you think of that?

WS: I don’t buy it. Writers who open up horizons for other people are performing a function every bit as important as a consciously politicized writer. The idea of having to make constant reference to politics is anathema to my calling as a writer. There is not a special imposition on writers to be activists. All that does is encourage writers to write propaganda. Propaganda can be written by anybody, including dictators.

MJ: You write about your cousin, musician Fela Kuti, and how you think his own politics were kind of naive…

WS: Not think, were! He was a passionate Africanist. But his definition and embrace of Africanism did not discriminate: Anything that was African was positive. You would never hear a word against Idi Amin, against the monsters. He always accused me of being a CIA agent when I was campaigning against Idi Amin. He’d say, “Boss”—he called me “Boss”—”Boss Wole, don’t be influenced by the CIA people.” I said, “Shut up, you don’t know anything about it!”

MJ: You say that you don’t relish violence but you can reconcile yourself to its use, in cases such as apartheid South Africa or Sani Abacha. How did you come to reach that point?

WS: It’s a strange thing. When I compare my experience with other Nigerians, other Africans, I find that I have been through a number of violent situations that I can’t even begin to narrate because no one would believe them. I have a kind of magnetic attraction to situations of violence. I think this has enabled me to compare those situations and my responses to them and internalize the conclusions, and let those conclusions govern my attitude toward deliberately initiated violence.

I never hesitated, as a student, in embracing the necessity of violence. In South Africa, I didn’t just accept it; I looked forward to it as a mission. As I grew older and more mature, I’ve been able to move beyond the immediate response of violence to a projection of the pragmatic, political consequences of that violence. So it’s an effort to attain equilibrium. The moment I say, “All right, there is no alternative,” I am completely at peace. I am comfortable with it; I was during the Abacha regime, especially after the hanging of Ken Saro-Wiwa. I can look violence in the face and either reject or accept it.