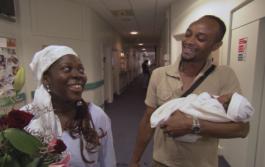 Michael Moore takes a lot of heat for his showboating. Even before the release of his latest film, Sicko, he was attacked for taking 9/11 rescue workers to Cuba to get medical treatment that the federal government had refused to provide. Like most Moore stunts, it made his point—while simultaneously eroding his credibility. But at a recent sneak preview of the film, it was clear that for all his bombast and ego, Moore has developed a cinematic style that can bring radical ideas to mass audiences. With Sicko, he’s tapping into popular outrage over health care just as national and state politicians are weighing in with proposals for reform. It may be Moore’s best shot yet of actually influencing policy.

Sicko‘s Sacramento premiere, sponsored by the California nurses’ union, offered an unusual opportunity to march to a movie theater from a protest rally. Earlier in the day, Moore and three of Sicko‘s protagonists were star witnesses at a state Senate briefing on health care reform. Before a roomful of nurses wearing red Sicko-themed scrubs, Moore began his testimony with genuine humility, describing how the film grew out of a short segment on Bravo about a man who had a necessary pancreas transplant denied by his HMO, which resulted in the HMO approving the transplant. “I began to think at that moment,” Moore explained, “if we could save one man’s life in ten minutes with nothing more than this tool, this camera and a microphone, what else could we do?”

His testimony reached a crescendo when he declared, “We’re the only country in the western world that doesn’t believe it is a human right to provide free universal health coverage for every one of its citizens. And we’re the only country—this is what is so amazing, isn’t it? Because we’re all Americans….We’re a good people, we have a good heart and a good soul and we have a conscience…. [But we] allow 9 million of our children to go uninsured…. What is wrong with us? That’s not who we are, that’s not what we used to be about!” Moore didn’t just tap into his usual patriotic populism; he also sang California’s praises and urged the state to “lead the way again.” During his testimony, most people in the audience cried, gave a standing ovation, or both.

Moore didn’t come to California’s capital just to advocate for insuring more Americans. The sneak preview was offered in support of a bill by State Senator Sheila Kuehl that would create a single-payer system in the state, the only one of four reform proposals now on the table that would do so. Moore is clearly also hoping that his film will fuel a national push toward government-funded healthcare. For that reason, Sicko avoids stories about the uninsured and instead focuses on the tragedies profit-driven private insurance companies cause among insured, middle-class Americans. But a single-payer system is a hard sell. So, while Sicko indulges in its expected share of grandstanding and emotional manipulation to make its point, Moore had to employ his significant powers of persuasion—whether earnest or manipulative—to give his film a shot at affecting health care policy.

Sicko profiles Americans who are forced into financial despair, illness, or death by the unjust limitations of their health insurance programs. It presents tear-jerking tragedies like those of Dawnelle Keys, whose 18-month-old daughter died of an infection treatable with antibiotics after Kaiser refused to authorize payment at the “out-of-network” hospital to which the ambulance rushed her. Moore’s long shot of the worn—and noticeably thin—scrapbook that is all Keys has left of her daughter manages to balance emotional theatrics with genuine tenderness.

Moore also milks the humor of insurance-company irrationality. Sicko features Becky Malke, an employee at an insurance call center, who tearfully explains how she must reject applications from anyone with illnesses on a list of disqualifying preexisting conditions. “How long is that list?” Moore asks. Malke answers sheepishly, “It’s pretty long.” Cue up the Star Wars theme song as the encyclopedic list scrolls up the screen and into outer space. Another woman tells how her ambulance ride from a car accident to the hospital was denied because she failed to have it preapproved. The audience’s knowing laughter drives home the point that most Americans—even those who become apoplectic at the idea of a single-payer system—are fed up with insurance companies’ Kafkaesque bureaucracies.

For contrast, Moore interviews happy, healthy Europeans and Canadians who express satisfaction with their government-funded systems. Unexpectedly, the film’s most persuasive emotional note was hit by the dry humor generated by their bafflement at our plight. The film opens with the story of an American man who cut off two fingertips with a circular saw. Uninsured, he can only afford to reattach one. Later, Moore meets a Canadian who cut off four fingers entirely. He was rushed to the hospital and underwent 24 hours of surgery; all four were successfully reattached. As Moore tells him about his American counterpart, the camera zooms in on the man’s brow: a tiny, confused furrow. The audience doesn’t need any more to burst into brittle laughter.

Still, it’s hard not to see Moore as self-aggrandizing at times. The film includes a long shot of him floating in a powerboat at the edge of Guantanamo Bay, flanked by 9/11 rescue workers, using a bullhorn to reason with an apparently empty watchtower. Moore declares that he’s only asking that the rescue workers receive the same for the same preventive care that the government gives the Gitmo detainees. There’s also a scene where Moore documents his “anonymous” payment to the author of the anti-Moore website, Moorewatch.com. In the filmmaker’s version, his detractor had announced that he would have to choose between maintaining the site and paying for his sick wife’s mounting health insurance premiums. (The detractor has not been mollified and slams Moore’s version as yet another self-serving misrepresentation.)

But Moore deserves credit for pioneering the documentary film as a genre capable of mass appeal and for using his films as engines for change. Sicko may just prove a more effective catalyst than Farenheit 9/11. The takeaway message of that film—that George W. Bush is a bad president and the United States shouldn’t ally itself with Saudi Arabia—was far less inspirational than Sicko‘s call for Americans to take pride in their country by helping one another. Moore certainly has the public’s attention; it will be fascinating to see if he manages to sell enough conservatives on his message to force politicians to offer more than a Band-Aid for the healthcare crisis.