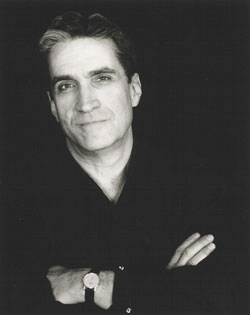 Robert Pinsky has spent the better part of his career trying to convince Americans that poetry is for everyone. While he was serving as the United States poet laureate from 1997 to 2000, he traveled around the country with a camera crew, filming people reading their favorite poems. The result was the Favorite Poem Project, an online video database where you can watch a salesman in Barneveld, New York, read John Ashbery or a U.S. Marine officer in Miami recite Walt Whitman.

But spreading the gospel of poetry is only part of what Pinsky does these days—he’s also Slate‘s poetry editor, is working on an opera libretto, and still makes time for the occasional guest appearance on The Simpsons and The Colbert Report (which happen to be two of his favorite shows). His new collection, Gulf Music, is characteristically eclectic—its images range from the minute (a jar of pens) to the immense (“a big tent, filled with mostly kids, yelling for poetry”). Woven throughout are ruminations on the responsibilities that come with aging. “Part of what I’m trying to do in these poems is relate what any human being has to do as you get older,” he says. “A good elder tries to figure out what principles, what bits of lore one should leave behind—what that you think deserves to be preserved.”

Pinsky spoke with Mother Jones about Gulf Music, the difference between poetry and hip-hop, and why comedy is better today than ever before.

Mother Jones: In the poem “The Forgetting,” you write, “You’ll see, you little young jerks: your favorite music and your political/ Furors, too, will need to get sorted in dusty electronic corridors.” It seems like that line sums up something that you’re thinking about in Gulf Music, which is what endures and what doesn’t. What got you thinking about that?

Robert Pinsky: The title poem, “Gulf Music,” includes an instance of forgetting and remembering that was very powerful to me. I gave a reading in New Orleans after Katrina. The extent of the devastation—and the inadequacy of the recovery—was striking. I’ve always loved the piano style and the vocals of [New Orleans jazz musician] Professor Longhair. I discovered that Professor Longhair and his wife were members of a civic service organization called the Civil Defense Special Forces 714. They were organized largely because hurricanes and floods could cause a lot of damage, and you needed people who would keep things as safe and helpful as possible. The organization was a kind of lodge that flourished for decades. The time between famous hurricanes was long enough that, as far as I know, there was no trace of that organization when it could have been used. That image is almost the definition of culture—it’s what’s sorted out as enduringly useful from generation to generation, or from decade to decade.

MJ: Some people have said that hip-hop is continuing the poetic tradition in the United States today, but Salon pointed out that the Favorite Poem Project website doesn’t have any spoken word or hip-hop on it. Why not?

RP: The crucial distinction for me between something that may be a great song and poetry is, Does it depend upon the performer? The poem must sound like a poem in the voice of anyone who chooses to say it aloud. And the Favorite Poem Project demonstrates that. I honor performance a lot, but poetry is not the art of performance. Also, I think it would be odd to say that hip-hop doesn’t get enough attention, that I should correct and pay less attention to this guy reading Sylvia Plath or this young woman reading Langston Hughes and give more attention to hip-hop, as though I’m hogging all the attention. There I am, trying to recognize that people love the poetry of Walt Whitman and Emily Dickinson, our great heritage, and somebody is saying, “You’re not paying enough attention to hip-hop!”

MJ: A few years ago, Newsweek ran an article called “Poetry Is Dead.”

RP: You could much more argue that Newsweek is dead, that the heyday of news magazines was in the early ’60s.

MJ: You recently went on The Colbert Report to judge a “Meta-Free-Phor-All” between Stephen Colbert and Sean Penn.

RP: These are two very skilled performers, and intuitively they had a very good notion of the importance of poetry. I like both of those guys very much. I confess that I find a lot of the stuff that goes into titles like poet laureate to be highly spurious and silly. But I’ll always be grateful for the laureate title because I think it probably helped people decide to invite me to be on The Simpsons and The Colbert Report. I love comedy, and I think we’re in a great period of comedy, maybe our greatest period of comedy in American history—certainly American television.

MJ: Does that mean that The Simpsons and The Colbert Report are going to endure?

RP: I think so. I think the best episodes of those shows will endure, partly because they have a kind of moral seriousness. We’re in a grown-up period of comedy. The old Saturday Night Live might have been a step in the right direction, and they did some terrific things, but it was not as informed or as bold. The performers were great, but the writing is more ferocious and more informed and smarter today. [Comedian] Sid Caesar was one of the artists I first realized was a really great artist. I didn’t grow up in a family that was literary, but we were smart, and we knew Sid Caesar was very good. Eventually Sid Caesar was competing with Lawrence Welk, and Welk was more popular, but I deeply think my family was right. This present time is the only time that’s worthy of being compared to the old Sid Caesar shows.

MJ: What other pieces of culture should be remembered?

RP: A lot of the black musicians who never had People magazine popularity. Big Mama Thornton. Buddy Guy. We can’t rely on the academic world or the journalistic world to decide how much anything is of ephemeral value or lasting value. When you have contact with a classroom or with a magazine, I believe you should not just think in terms of the mores and customs of the professor or the editors, but to think in terms of Buddy Guy and Emily Dickinson and Akira Kurosawa and all the artists that you think are valuable.