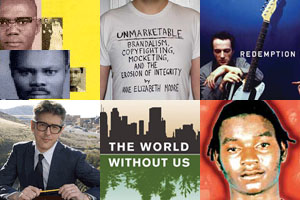 Legacy of Ashes: The History of the CIA. By Tim Weiner.
An epic, eye-opening history of an American institution out of control. Weiner, a two-time Pulitzer winner who’s covered the agency for two decades, presents 60 years of bungled covert operations, blatant criminality, lying to the public, and breathtaking incompetence. But he also conclusively disproves the myth of CIA omnipotence, long held by defenders and detractors alike.

Unmarketable: Brandalism, Copyfighting, Mocketing, and the Erosion of Integrity. By Anne Elizabeth Moore.
Conversational, intellectually curious, and charmingly ragged, Unmarketable is an anticorporate manifesto with a difference: It exudes raw coolness. Moore offers a sophisticated analysis of how companies co-opt trends and a relatively knowledgeable gloss of “copyfighting”—challenging companies’ often extreme intellectual property claims. What Unmarketable lacks in polish, it makes up for with D.I.Y. authenticity

God’s Harvard: A Christian College on a Mission to Save America. By Hanna Rosin.
Rosin, a religion reporter for the Washington Post, spent 18 months at Patrick Henry College, an evangelical institution in northern Virginia whose mission is “to prepare Christian men and women who will lead our nation and shape our culture with timeless biblical values.” A good number of Patrick Henry alums have gone on to work at GOP think tanks, as White House aides, or as interns for prominent Republicans. Rosin can’t quite stomach Christian campus culture, but her portrayal of the students she meets is never one-dimensional.

The Argument: Billionaires, Bloggers, and the Battle to Remake Democratic Politics. By Matt Bai.
Bai combines the jaded eye of a gossip column with the arc of a Greek tragedy in this incisive tale of Democratic soul-searching. Brushing off the 2006 “protest vote” that swept Democrats into Congress, The Argument explores the well-worn idea that the party’s been unable to forge a grand agenda since the New Deal. Bai is a sly observer of the left’s parlor talk, conferencespeak, and off-the-cuff confessions. It’s less the ideas he finds than those he doesn’t that make this book worth picking up.

The Sandbox. Edited by David Stanford. Introduction by G.B. Trudeau.
Born out of the Doonesbury cartoonist’s popular milblog of the same name, this book is a best-of anthology of riveting dispatches typed on laptops on the frontlines of Afghanistan and Iraq. Far from political, these soldiers’ tales present the intimate day-to-day realities of war, putting a human face on those caught up in an increasingly aggressive ground war.

Beyond the Green Zone: Dispatches From An Unembedded Journalist in Occupied Iraq. By Dahr Jamail.
Jamail is a gutsy neophyte (and occasional motherjones.com contributor) who traveled to Iraq in 2003 to tell the stories of civilians under fire. This book presents the unvarnished voices of ordinary Iraqis that have been largely missing from mainstream reportage. Its firsthand account of the 2004 siege of Fallujah will likely prove an enduring document of what really happened during the early years of the American occupation of Iraq.

Deer Hunting With Jesus: Dispatches From America’s Class War. By Joe Bageant.
Deer Hunting With Jesus takes Thomas Frank’s What’s the Matter With Kansas? to the next level. The son of a snake-handling, fundamentalist, backwoods Virginia clan, Bageant uncovers harsh lessons about how liberals failed the people who do society’s grunt work, fight our wars, and wind up with little to show for it. Enough fine Southern-style storytelling for 10 volumes is distilled into this fantastically readable explanation of why working-class America has given up on liberalism.

Redemption Song: The Ballad of Joe Strummer. By Chris Salewicz.
Both scholars of punk history and casual fans should enjoy this surprisingly frank and entertaining biography of the legendary Clash frontman. Salewicz’s meticulous description of the Clash’s rise from a pub band griping about punks “turning rebellion into money” into a Top 40 chart-topper is engrossing (if 600 pages long!). He doesn’t paint his pal Strummer as a saint; Joe, he writes, was “far too interesting for that.”

The Canon: A Whirligig Tour of the Beautiful Basics of Science.
By Natalie Angier.
In her latest, Angier uses her flair for storytelling to make a case for the sheer delight of the most mundane of scientific endeavors. Her message is that we shouldn’t be scared off by what hard science can teach us about what we care most about, whether it’s global warming, earthquakes, or the food we eat. While she laments the erosion of our national scientific IQ, she offers plenty of quick and anecdote-filled lessons for anyone who checked out in high-school chem.

Maxed Out: Hard Times, Easy Credit, and the Era of Predatory Lenders. By James D. Scurlock.
Maxed Out is an enlightening tour of the bleak financial landscape of a nation in love with easy credit. Scurlock introduces us to collection agents, personal finance gurus, families with kids who killed themselves to avoid credit card bills, and the visionary who realized Visa could get away with charging 18 percent interest. In this topsy-turvy world of legalized usury, the lucky few who can pay off your bills each month, are known as “deadbeats.”

The World Without Us. By Alan Weisman.
What if all human beings suddenly disappeared? ]As Alan Weisman explains in this intriguing thought experiment, most traces of us disappear—give or take a few millennia. The World Without Us is as disturbing as the pronouncement of a terminal diagnosis, but its lesson is that the planet will survive without us. Not the reverse.

Brother I’m Dying. By Edwidge Danticat.
The Haitian-American writer’s memoir is a historical tale of the two men she knew as fathers, brothers growing up in turbulent Haiti who come to live very different lives, one as a priest in Port-au-Prince, the other as a New York City cabbie. Both face dangers and hardships, and both love Edwidge fiercely to their last days. Danticat weaves her family portrait into a larger story of two countries in a changing world, gently brings the two stories together in an ending you won’t soon forget.

Sicko.
Sure, Michael Moore’s look at our broken health-care system was full of showboating, bombast, and ego, but it was his best shot yet of actually influencing policy. Its tear-jerking profiles of Americans screwed over by Kafkaesque bureaucracy could raise the blood pressure of even viewers who’d otherwise become apoplectic at the idea of a single-payer system. Moore’s now-infamous stunt of bringing 9/11 first responders to Cuba for a bit of Castro-sponsored care may have ultimately said more about the sorry state of American medicine than his self-aggrandizing excesses.

The Wire.
In its fourth season, the addictive, unpredictable cops-and-drug dealers series turned its sights on education in the No Child Left Behind era. Sounds boring, but the result was a heartbreaking portrait of four adolescent boys growing up on the mean streets of West Baltimore and their brushes with the teachers, cops, and gangsters who compete for their allegiance. The only catch: You have to watch the first three seasons on DVD before you can fully appreciate it.

Jonestown: The Life and Death of Peoples Temple
This detailed chronicle of Jim Jones and the politically radical cult that ended with the deaths of more than 900 people goes beyond A&E fare. Former members recall Jones’ charisma and their desperate desire to believe in him. Says one, “I actually believed there was a heaven on earth”—before breaking down and adding, “Now I can’t believe in heaven anymore.”

The Trials Of Darryl Hunt.
In 1984, 19-year-old African American Darryl Hunt was arrested for the rape and murder of a white woman in Winston-Salem, North Carolina. Forensic evidence failed to match Hunt to the crime, but he was convicted by an all-white jury on the basis of testimonies of a Klansman and a cocaine-addicted teenage prostitute. Tenacious codirectors Ricki Stern and Annie Sundberg followed Hunt’s harrowing story for more than a decade, finding a man who maintained his composure and his faith over 20 years, even as those working to free him began to doubt they’d ever succeed.

This American Life.
The Showtime series based on Ira Glass’ breakthrough public-radio show was reassuringly good, not just in the sense of not being cringe-inducing, but in the sense that like its inspiration, its episodes stuck in your head. Glass used to say “radio is your most visual medium.” The televised TAL showed that some things really are better seen than heard.

Taxi to the Dark Side.
The story of a young Afghan who died in American custody frames this damning case against our government’s use of torture, filmed by the director of Enron: The Smartest Guys in the Room. Taxi obliterates the notion that the abuse of suspected terrorists is the consequence of a few bad apples. An impressive array of witnesses, experts, and apologists spill details as absurd as they are frightening. As one former interrogator who was in Afghanistan and Abu Ghraib—and acquitted of abuse charges—puts it, “You put people in a crazy situation, people do crazy things.”