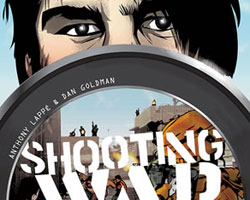 In 2011, John McCain is president, the U.S. and Israel have bombed Iran’s nuclear plants, and gas is $8 a gallon. The U.S. economy is in recession, and there are 10,000 American troops still fighting in Iraq. Jimmy Burns, a self-obsessed 20-something with a perfectly sculpted, asymmetrically-spiked haircut, a fitted, black zip-up pullover and a hand-held video camera, is a semi-famous video blogger whose life is about to change. After capturing footage of a terrorist bombing of his Brooklyn neighborhood Starbucks, a major TV news network hires him as an Iraq war correspondent.

Once in Iraq, Jimmy waltzes in and out of fierce combat, smokes cigs, hooks up with a New York magazine reporter, grows a beard, and strolls into bars wearing treehugger tank tops. But Iraq, Jimmy finds, isn’t all adrenaline rushes and hot chicks: He also becomes the pawn of the leader of a terrorist group, witnesses the aftermath of the massacre of innocent people at a hospital, gets his camera stolen, and just barely survives multiple gun fights and explosions by the skin of his teeth.

He also receives life-affirming advice from an aging Dan Rather (“Courage, Burns. The frequency is courage.”). Jimmy’s ultimate lessons? War ain’t pretty (there’s lots of images of bodies blown to bits), the world does not revolve around one man alone (well, not most of the time, anyway), and a video camera and a knack for being in the right place at the right time can really take you places in the blossoming era of citizen journalism.

This is the vision of our future as depicted in Shooting War, a 192-page graphic novel created by journalist Anthony Lappé and illustrator Dan Goldman, a collaboration made possible through a craigslist ad that Lappé posted. They first hatched the idea more than a year ago as a webcomic for a storytelling website called Smithmag.net, where it got close to one million page views a month at its peak and was nominated for a 2007 Eisner Award for “Best Digital Comic.” The webcomic version is still posted on the site.

The story unfolds through a collage of digital photos and drawings. Department of Defense website photos are mixed in with Goldman’s own shots in the U.S.; some of which are not always what they seem to be in the book. A public toilet from a national park in Colorado doubles as part of a command center in an underground bunker in one scene. Fencing around an Iraqi airplane hanger in the book was actually shot in Goldman’s Brooklyn neighborhood. “It’s similar to making hip-hop music,” Goldman told me over the phone. “Snippets of things you see are not in the context of story, but all the little pieces come together to make the story.” To layer drawings and shading on top of photos, Goldman drew everything directly onto a 21-inch touch screen using an electronic, wireless pen, Adobe Illustrator, and Photoshop. Everything combined, this is a slick-looking book.

The text is heavy on the action-flick dialog (Fixer to Jimmy: “Who was that…? Jimmy to fixer: “Don’t worry about it. Take a right…And follow that green car.” Fixer to Jimmy: “Are you crazy?? We’ll miss the press conference!!”). An exchange between a network news exec and Jimmy Burns is particularly hard-boiled: “You think anyone really wants to hear about Wal-Mart arse-fucking the Indonesians? They want $5 barrels of peanut butter and flat-screens for the price of a lap dance. I know you. I saw it in your eyes. You’re hooked now. You need the action.”

It’s also über-macho. (American soldier to Jimmy: “If I ever hear a peep from you, I’ll drop you off in the middle of Baquaba naked with ‘Mohammed is a fag’ written in Arabic across your chest. We clear?”). The scenes that depict the budding friendship between Jimmy and Dan Rather (wearing a Dallas Mavericks-sponsored combat helmet) cast Rather as a fast-talkin’ guy full of folksy wisdom and one-liners (Rather to Burns: “As we used to say back in West Texas, if a frog had side pockets, he’d carry a handgun. So where’s the action today?”)

At a recent in-store discussion and book signing in San Francisco, the authors’ spiel included as much pontification on the war and culture as it did off-the-cuff banter about mainstream media (Lappé, critiquing TV news anchors: “Just because someone’s serious, doesn’t mean they’re legitimate.”) Both of them big Daily Show fans, they say they wanted the book to be similarly ironic, sarcastic, funny, and entertaining, and also dark.

For an audience who appreciates brisk pace, cool visuals, and entertainment-focused banter, I’d say they succeeded. But for a more critical, thoughtful analysis of the war and current American foreign policy, not so much. Shooting War is a wild, somewhat adolescent, ride through combat, imperialism, and capitalism that had me eagerly flipping pages, but ultimately craving more meaning beyond the crafty images and flippant dialog. But then again, Shooting War isn’t The New York Times, and hard-hitting reporting and analysis was never the point of this project.

Lappé summed up their M.O. in this way at the San Francisco appearance: “Writing this book was a breeze. Journalism is hard. It’s a big grind.”