Coming from five generations of Ku Klux Klan members, 58-year-old “Ms. Ruth” sews hoods and robes for Klan members seven days a week, blessing each one when it’s done. A red satin outfit for an Exalted Cyclops, the head of a local chapter, costs about $140. She uses the earnings to help care for her 40-year-old quadriplegic daughter, “Lilbit,” who was injured in a car accident 10 years ago.

The following is a photo essay about Ms. Ruth by New York photojournalist Anthony Karen, a former Marine who has spent several years photographing members of the Ku Klux Klan. The essay includes audio of interviews with Karen and Ms. Ruth.

Listen to Anthony Karen introduce himself and his photo essay: 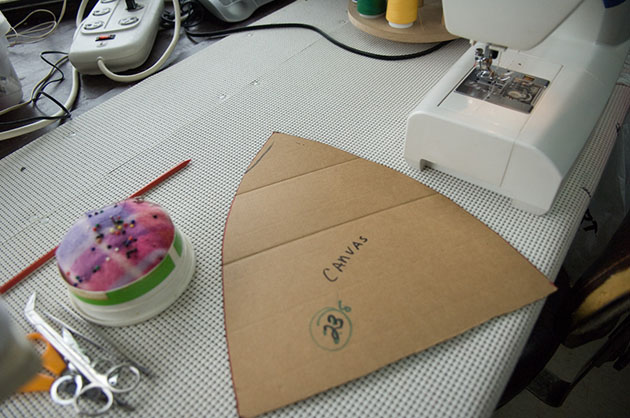 Ms. Ruth is a 57-year-old tailor who lives in the Deep South. She makes ceremonial Ku Klux Klan robes and comes from five generations of the Klan. This is pre-cut cardboard outline for one of her Ku Klux Klan hoods. 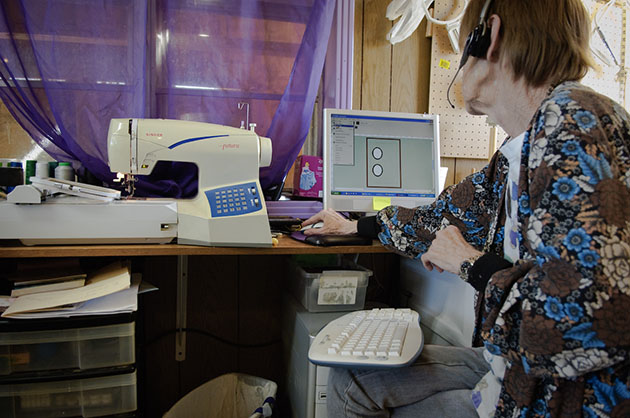 Ms. Ruth at her work station at home, sitting in front of her computer and a sewing machine. 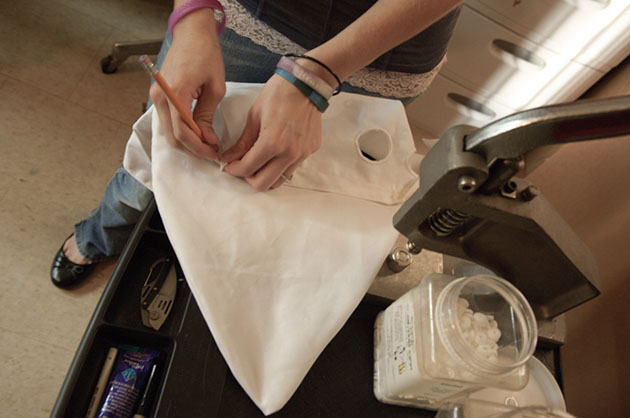 The beginning stages of a new hood in white, a traditional Klan robe color.

Listen to Ms. Ruth talk about the KKK: 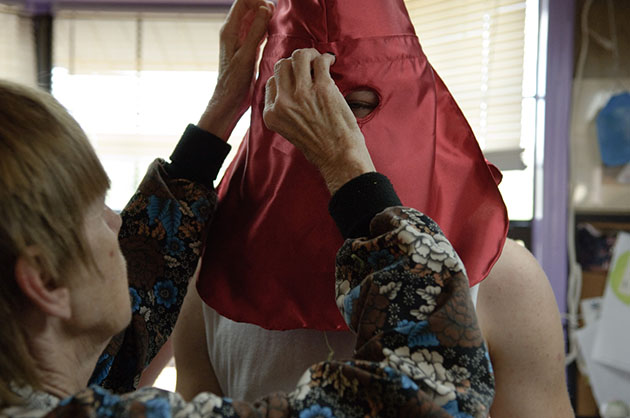 Ms. Ruth personally sews one robe a day. She works 10 to 12 hours a day, seven days a week. She has 1 to 3 helpers at times. The person to be fitted measures themselves, fills out the tailoring chart, and mails in the order. It takes 4 to 6 weeks for delivery. Here she puts the final touches on a red Klan hood.

Ms. Ruth talks about the KKK: 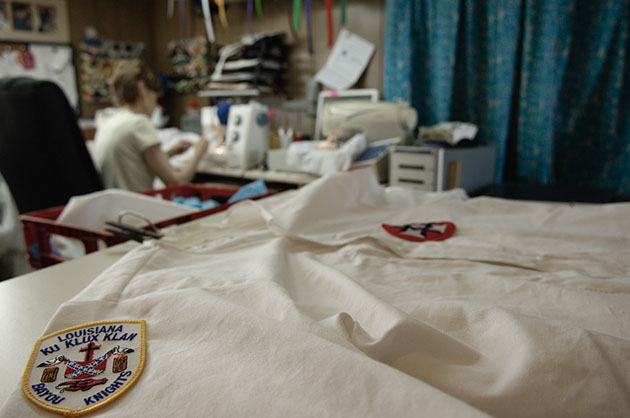 A Louisiana Ku Klux Klan patch on one of Ms. Ruth’s new white robes. Ms. Ruth works in the background. 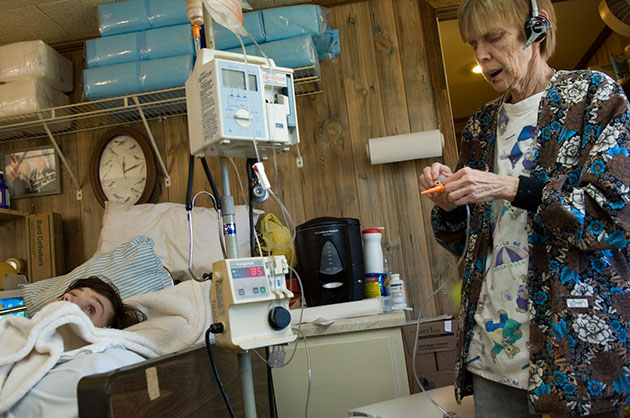 Ms. Ruth changes her daughter’s IV fluids. “They said she wouldn’t live for more than three months. I refused to leave her in the hospital, so I took her home.” Caring for her daughter Lilbit is a full time job. Ms. Ruth rarely leaves the house; she spends most of her time sewing and taking care of her daughter and her animals.

Karen talks about a day in the life at Ms. Ruth’s house: 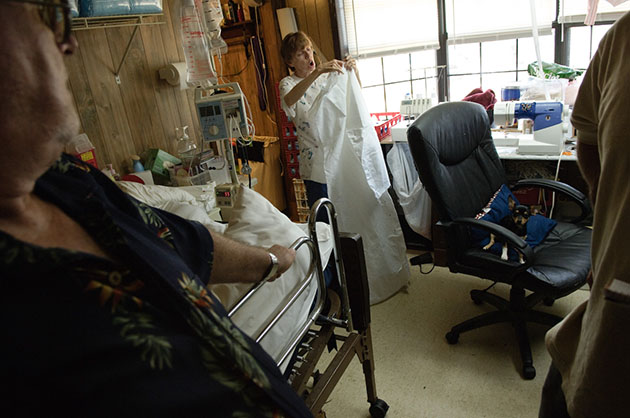 Ms. Ruth’s husband has just returned from the Sunday flea market, where he rents a booth to sell white pride merchandise. Ms. Ruth fills him in on the events of the day, including the temporary escape of several pets. 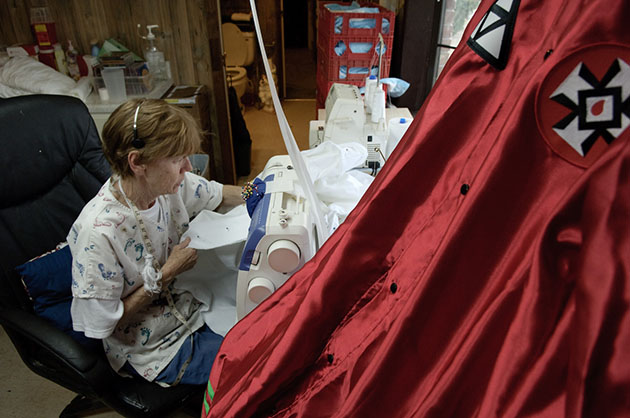 There aren’t many people making traditional ceremonial Klan robes these days. As far as quality is concerned, Ms. Ruth stands alone. All of her robes and hoods are custom made by hand.

Karen talks about the reluctance of KKK members to let him photograph them: 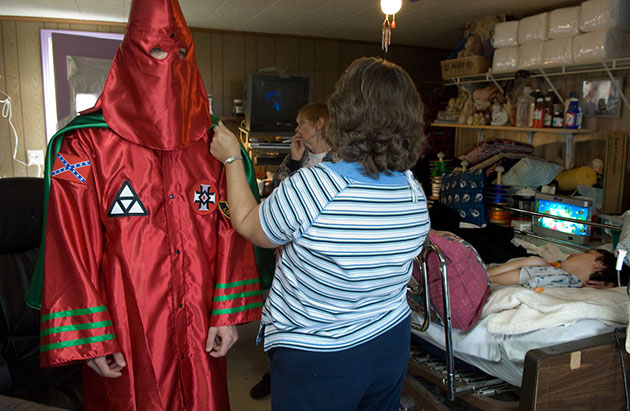 Sue (right), checks the fit of a red satin robe made for an Exalted Cyclops of the KKK, while Ms. Ruth takes a cigarette break in the background.

Listen to the Karen talk about this photo: 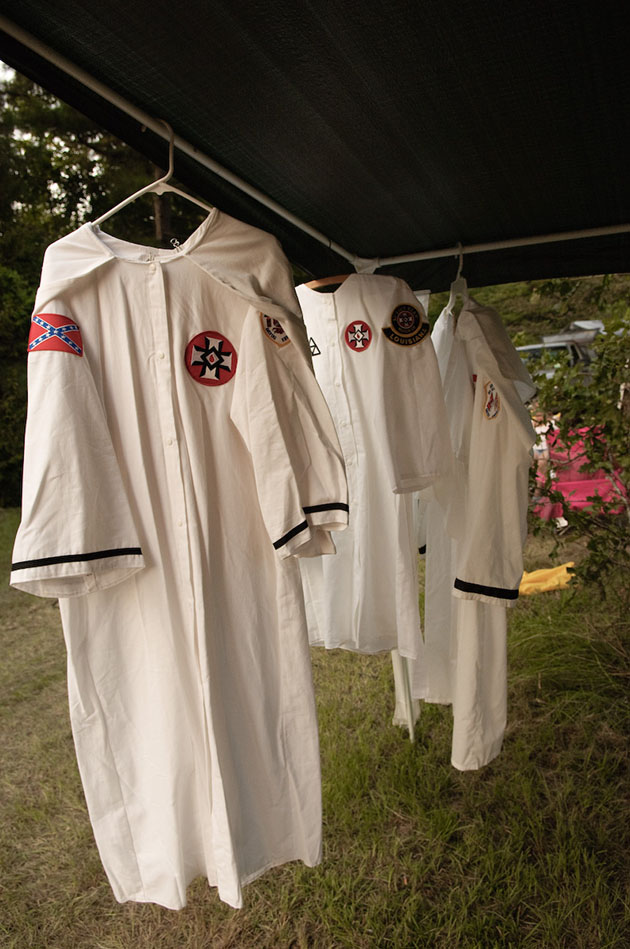 The traditional Klan robe is white, although over time, many groups have adopted their own color system. Robes may also have stripes. They can be any color, depending on the group and its policies. Robes come in satin or cotton. Good quality custom cotton robes sell for $105 to $115; satin robes cost between $110 and $140. 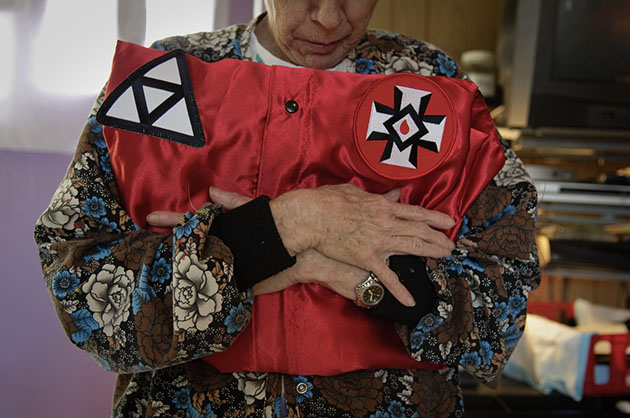 Ms. Ruth blesses each robe before sending them off. Here, she is holding a new, red satin robe against her chest as she blesses it.

Karen talks about this photo: 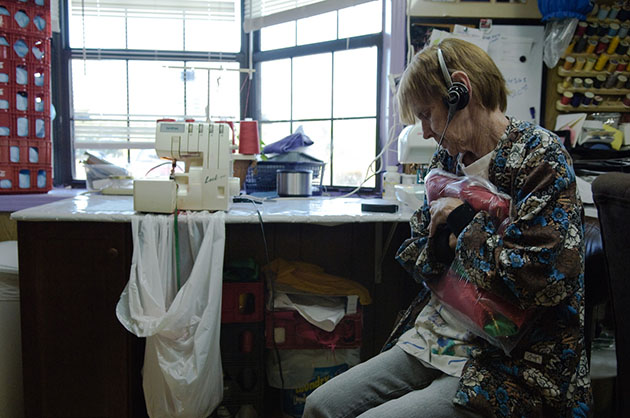 Ms. Ruth holds a new robe close to her as she blesses it before sending the robe off to the customer.

Listen to the photographer talk about his relationship with Ms. Ruth: 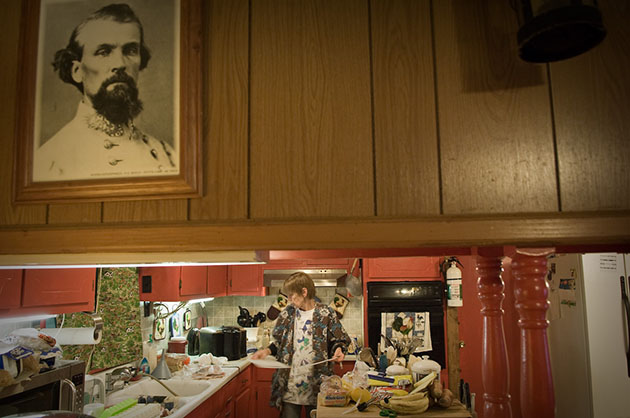 In the middle of preparing dinner for her family, Ms. Ruth gets interrupted by a phone call requesting information on the various ceremonial robe colors. Between phone calls, sewing, and caring for her daughter and all of her animals, it’s “Just another day at the zoo,” she says. A picture of Nathan Bedford Forrest, one of the founders of the KKK, is displayed in the living room just outside the kitchen.

Listen to the Karen talk about this photo: 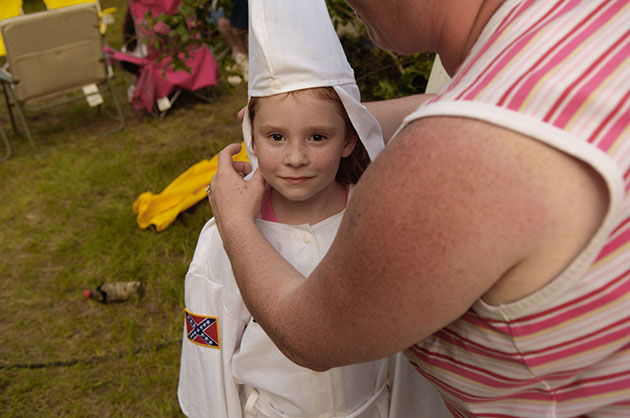 A young child wears a new white Klan robe made by Ms. Ruth.

Listen to Ms. Ruth talk about the meaning of the Klan: