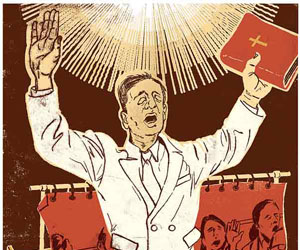 this february, the Pew Forum on Religion & Public Life released the most comprehensive of its surveys of the “religious landscape” of the United States. Front and center was the finding that 26 percent of American adults—around 54 million—are evangelical Protestants. The idea that 1 in every 4 of us thumps a Bible only confirmed what many had assumed to be gospel since 2000, when evangelical voters were credited with winning the White House for George W. Bush and the media began its grand genuflections toward a resurgent fundamentalism, casting evangelicals (and more broadly, “values voters”) as a politicized wedge that politicians ignored at their peril.

And who could blame them? Not only are evangelicals supposedly our biggest religious voting bloc, but Pew reports that nearly 80 percent of Americans are Christian, and 40 percent attend church weekly according to Gallup Polls. But what if those numbers—and everything we’ve assumed they tell us about the power of the religious right—are wildly wrong?

Take that 40 percent church attendance stat. Looking around her half-empty Southern Baptist church outside Dallas, Christine Wicker had her doubts. Wicker, a veteran Texas newspaper reporter, was born again when she was nine but drifted away from her evangelical roots in adulthood. A few years ago, she returned to the Southern Baptist Church to both renew her faith and write The Fall of the Evangelical Nation, an insider’s look at evangelicals’ power, wading in where secular journalists feared to tread. When she started looking into the numbers on church attendance, she found that researchers could vouch for only 18 percent of Americans being regular churchgoers—less than half the accepted figure. That led her to wonder about the already widely reported claim that 25 percent of Americans are evangelicals; could the real number also be less than half that?

In size, only the Catholic Church dwarfs the Southern Baptist Church, the biggest evangelical denomination and by far the most organized and fastidious of the Protestant record keepers. But Wicker discovered that the numbers the Southern Baptist Convention (sbc) releases for public consumption tell a much different story than the ones it uses internally. The organization claims 16 million members, but as one reverend cracks, “the fbi couldn’t find half of [them] if they had to.” A 2006 sbc report states that only 11 million of its members live in the same area as their home church anymore; that number includes those who’ve been double- or even triple-counted elsewhere. It also includes perennial no-shows and those who attend services at “bedside Baptist” (they sleep in on Sunday but show up for Easter and Christmas). And that’s not to mention those who’ve lost their religion or converted to another faith. If their names were ever on “the roll” at a Baptist church, they’re probably inscribed there for life.

With more digging, Wicker came across a 2007 sbc report that found only 5.4 million adults attended services regularly enough to be considered church members. Further complicating matters, many of those who regularly filled the pews weren’t official members, and, most significantly, 1 in 8 wasn’t saved or born again. Factoring all this in, Wicker calculated that there are fewer than 4 million devoted Southern Baptists. Her math seems to be backed up by collection-plate totals: If the church truly has 16 million members, then they contributed a miserly $3.50 each to a nationwide fundraising campaign last year.

And it’s not just the Southern Baptists who appear to be playing number games. The National Association of Evangelicals, an umbrella group that does not include the sbc, claimed 30 million members on its website. When Wicker contacted the association for comment, the figure changed to 4.5 million. No one there could—or would—explain the sudden 85 percent drop in believers. (However, the group’s website currently describes its lobbying arm as the voice of “30 million Americans united under a common banner.”)

The emperor’s-new-clothes flimsiness of these widely accepted exaggerated numbers says much about the cold calculation of far-right religious leaders. Moral Majority and Focus on the Family have happily staked their clout on coreligionists who never knew they were being counted—often twice or three times—among the faithful for political ends. “The idea that evangelicals are taking over America is one of the greatest publicity scams in history,” Wicker concludes, “a perfect coup accomplished by savvy politicos and religious leaders, who understand media weaknesses and exploit them brilliantly.”

Though she doesn’t delve into those weaknesses, Wicker’s findings speak volumes about the limitations of a Fourth Estate that accepted and uncritically deferred to the power of the religious right. Having been handed a ready-made story line by the thou-shalt-not brigades, the media became transfixed by a phenomenon they couldn’t fully fathom but felt bound to report on. Those unexamined numbers and claims of followers in theological lockstep launched a thousand cover stories and columns—rarely prompting questions about what a term as broad as “evangelical” really meant on the ground. Whether they viewed it as a new political reality, a megatrend, or a bogeyman, the media embraced the idea of a reenergized, monolithic Christianity and faithfully chronicled something that didn’t exist.

Part of the problem is that the national-level journalists who control the discourse tend not to be, nor have they ever been, committed religionists as adults. Newsrooms are determinedly secular, and self-consciously so. Afraid of being tagged as godless liberals, most journalists would never dream of calling BS on believers. Which may explain why Wicker’s book could only have been written by a born-and-bred Baptist.

Innumeracy and gutlessness aside, why did we never ask ourselves if the label “evangelical” tells us anything more than the yarmulke or the head scarf on the person next to us at Starbucks? To assume that evangelicals overwhelmingly oppose divorce, abortion, and gay rights; that they believe in school prayer and intelligent design; and that they’re overwhelmingly politicized is a gross oversimplification that evangelicals themselves ought to find disquieting. As Wicker suggests, perhaps one’s answer to the drone who interrupts dinner to ask your “religious preference” is more reflex than exit poll.

Wicker finds that many of the most active believers belong to both a small “home” church and a megachurch where they “vacation.” And as the most recent Pew study shows, 44 percent of Americans say they have switched their religious affiliation or moved between periods of declaring a faith and religious free agency. Religious identity, it turns out, is as fluid as any other.

It is with believable regret that Wicker pulls the threadbare rug out from under the “powerful” Christian far right. “Just as I had finished convincing myself that the evangelical church was smarter and had more to offer than ever—I’m still convinced of that—I was hit with the growing suspicion that the entire faith might be sinking fast,” she writes.

She’s probably right that old-school fundamentalism is going the way of the dinosaurs. The Southern Baptist Church’s much-publicized effort to baptize a million souls in 2006 was a dismal failure; only one-third of that number “bathed in Jordan’s water.” According to George Barna, an independent evangelical researcher who tracks spiritual trends, 20 million born-again Christians are moving beyond formal churchgoing, meeting in small groups, often in each other’s homes. He predicts that by 2025, local churches will have lost half of their current “market share.” No doubt many of those leaving the church find fire and brimstone as anathema as any liberal but still believe that there is a living God who loves them.

If there are as few evangelicals as Wicker claims, can we ink-stained wretches go back to ignoring them? Not so fast. Religion will always be of more cultural significance than the mere number of its adherents, especially as the United States becomes ever more diverse and other religious traditions clamor to be heard. We will have to go on respecting Christianity and deferring to its oversize voice in public affairs if only because all those bedside Baptists might just stop sleeping in on Sunday if the beliefs they rarely dust off suddenly come under attack.

Still, The Fall of the Evangelical Nation makes plain that the media must be doggedly skeptical whenever faith-based constituencies claim their place in the public square. Maybe all us godless liberal journalists need to get religion about confronting America’s most sacred cow.