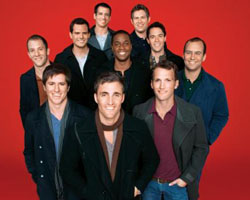 [This is a Mother Jones podcast. Listen to the audio above, or download the podcast from iTunes.]

Straight No Chaser is a 10-man a cappella group. They first sang together over a decade ago at the University of Indiana. Recently, the group posted a popular video of themselves on YouTube, and they got an unexpected offer—a music deal with Atlantic Records.

Nikki Gloudeman spoke with members Walter Chase and David Roberts about what the New York Times has called the “most unlikely major-label story of the year.”

MJ: Walter and David, thank you so much for taking the time to talk with me today.

MJ: Thank you. So my first question is about your YouTube video. Ten years after you first recorded it, you put it up online, on YouTube, and it got 8 million hits. Why do you think this video became such a viral sensation?

SNC: Not only is it humorous, and it has this element of chaos—as it’s going through it, it almost feels like it’s going to fall apart—I think we do a really good job of sounding musical and keeping this men’s chorus feel going through it. So I think it appeals not only as a comedic piece, but also as a strong musical piece. But as for how—you know, there’s a lot of great music out there— and how this particular song got so many hits, it might have just been because it is a holiday clip and, you know, a lot of these YouTube clips are non-holiday based and they get passed around. Since it was so concentrated, it might have just been passed around more and more during that holiday season.

MJ: And one of the people who saw this video happened to be the CEO of Atlantic Records. So he gives you guys a call—what was your reaction when you got that call?

SNC: He actually called (group member) Randy Stine and Randy happened to be online at the time and obviously was thinking to himself, “Yeah right, Craig Kallman” (Atlantic Records CEO). I don’t know if he google’d or wikipedia’d his name, but he was kind of reading his bio as he was talking to him and was like, “Wow, this might actually be for real.” And then had a meeting with Craig and called all of us. I was actually sitting at my desk at my day job, towards the end of the day, and I just remember thinking, “This is insane.” And that’s kind of what I’ve been thinking ever since.

MJ: The whole genre of a cappella seems to be something of a trend right now. It’s been featured in Vanity Fair, the New York Times, Newsweek, there’s a book by a GQ editor about it…Why do you think people are suddenly so interested in this pretty unusual genre of music?

SNC: It’s been pretty popular on college campuses for a while now. Some schools— actually I think Yale has an a cappella rush—so there are so many a cappella groups at the collegiate level that we think it’s sort of catching up to what’s taking place on the college level.

It’s one of those things where, not to say that all pop music is — it’s not necessarily musical—I mean there’s some incredible pop acts that are out there. I think that it’s come to a time, a cycle almost, where people are craving music that not only sounds good, but they know has substance to it. And I think that a cappella, of being no instruments, of just being raw voices, and the purity of that, I just think it’s something that people when they hear it—it has a stigma of having a great sound to it. I think it’s kind of how swing music came into vogue a couple years ago. I think it’s just catching up. We hope it’s definitely not just a phase—hopefully, that good quality music, and choral music, will be something that sticks around for a while.

MJ: Right. And speaking of the stigma of a cappella, the other stigma that I think a lot of people have is that it’s really not that “cool.” And I’m sure you’ve experienced that, people thinking that before. Do you think it’s possible to change how people perceive the genre, that they can actually see it as being, you know, a little bit “cool” to sing this style of music?

SNC: We hope so. It’s something we’ve tried to do. We’ve tried to make our own spin and do our own stuff that we think is cool, and try to put some soul into it. So we’re hoping that we can maybe change people’s opinions. But we understand that that may be a long road. And part of doing that, I think, is also just understanding that, and not really taking ourselves too seriously either.

We have a way on stage, just our humor between the ten of us. “We’re the funniest guys we know” kind of thing. When we’re on stage, it’s sort of self-deprecating humor, where we just sort of like to make fun of ourselves, regardless of if we’re singing or not. So I think that sort of carries over. I think if you take yourselves too seriously, that’s where you kind of line yourself up to be looked at as, you know, “These guys are phonies.” I think we do a great job of just keeping it loose, and letting our music speak.

Randy’s got a great quote: “We take the music very seriously. We just don’t take ourselves too seriously.” And I think that definitely rings true.

MJ: Do you feel like people respond to that?

SNC: Yes. I think our intros and our…When we’re doing a live set, it’s almost like ten guys competing for stand-up comedy at the same time. We all have our little inside jokes and they come out on stage—and just kind of building off of previous intros and such. We’ve done different medleys. We’ve done a “Teen Sensation” medley—not mocking the boy bands and the Britney Spears pop types so much, but just sort paying homage to them, but at the same time doing sort of over-the-top ridiculous choreography along with that, just to kind of poke fun at it. But at the same time, even those boy bands that everyone sort of rolls their eyes at, their music is quality. There is enough substance behind that that people would listen to it over and over again. And also, we do hip-hop. Nine out of ten of us are white, and we’re doing these “Slow Rider” and T.I. songs, and we try to do the music as much justice as possible. But at the same time, we’re making fun of ourselves. And by keeping that loose, then it works.

MJ: So what has been, overall, the most surprising part of this whole experience?

SNC: Besides the record deal? I think that’s first and second on the list.

MJ: Have there been any other big surprises as you’ve gone along with this?

SNC: Just the whole experience has really been such great fun. You mentioned the book—I think it was Perfect Pitch by Mickey Rapkin—he interviewed a couple of us for the Times article, and one of the questions he asked me was, “Am I ready for this to be a flop?” But we’ve had so much fun just getting back together. We haven’t spent this much time together, just the ten of us guy friends hanging out. Just from that aspect it’s just been really great fun and a huge success already. So any surprises, yes, everything’s just been a really wonderful surprise.

MJ: Once again, thank you so much for taking the time to speak with me today. I really appreciate it.

SNC: Thank you so much for having us.

That was Nikki Gloudeman, interviewing Walter Chase and David Roberts, members of the a cappella group Straight No Chaser. You can check out more podcasts at motherjones.com.

Clip: “Carol of the Bells”

Straight No Chaser is currently touring the country promoting their new CD, Holiday Spirits. For more information, go to www.sncmusic.com.