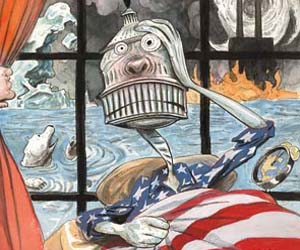 For over 30 years, satirical illustrator Steve Brodner has lampooned politicians such as George W. Bush, Bill and Hillary Clinton, Ronald Reagan, and Newt Gingrich. His colorful caricatures have won numerous awards and been featured in Mother Jones, The New Yorker, Harper’s, Esquire, and The Village Voice.

To listen to the podcast of this interview, click here.

For more free Mother Jones podcasts, subscribe here, or in our iTunes store.

MJ: Steve Brodner, thanks so much for speaking with us today. So I’m wondering: What makes politicians in particular so interesting to caricaturize?

SB: Well, it’s impossible to discuss that except on a case by case basis. Some are much more interesting than others. We as satirists, as caricaturists, want to be able to say a true thing about a politician. Some of them just offer up a very direct route to saying a true thing. And for example, our outgoing president, he gives us—aside from all the horrors that he’s conferred upon the county—he’s given satirists tremendous gifts. One of the great gifts of Bush and Cheney is the thing that we yearn for from every politician, which is clarity of good and evil, the ability to look at somebody and easily tell, clearly, directly, simply, what this is in terms of moral judgment.

MJ: Besides Bush—I’m sure he’s given you a lot of ammunition as a satirist—who in your some 30-odd years has really been easy to caricaturize?

SB: I would say that the ones that jump to mind are Richard Nixon and Newt Gingrich. It’s great when nature works with you, when somebody just by the great happenstance of nature happens to have a face that looks like what you think they really are under the surface. That’s what this is, this business of caricature. It’s the art of seeing if it’s possible to bring a picture of what’s under the skin under the surface.

MJ: What about Obama? Do you find him particularly easy or difficult to caricaturize, and do you see it evolving over the years?

SB: The book has not yet opened. It has not even started. And I’ve drawn him a lot, and I have him for the [Jan/Feb] issue of Mother Jones as a smiling, skinny guy. And that’s basically it. Skinny, though, is good, because we have some meat we want to put on the bones. That’s a metaphor. All these things are metaphors. The skinniness, and the ears sticking out, it shows that, well, we have the beginnings of something, what are we going to put on here?

MJ: So you could see it changing as time goes on depending on what happens?

SB: Oh, it will definitely. Every new president I’ve ever done, after a couple years and I look back on the first pieces I did, I’m amazed at how crummy they are.

MJ: Speaking of Obama, what was your reaction to that infamous New Yorker cover from last year where he did the terrorist fist jab? How did you react to that?

SB: Well that was by Barry Blitt and Francois Mouly was the designer, and I thought it was a successful experiment to see if a style of satire that’s extremely subtle and misdirected, which is their style, could be used with iconography that related to racism and terrorism. And people were horrified because the assumption is that you can’t, and that too many people will misunderstand the effort. And I think at first that’s what did happen, just a big misunderstanding, and that by stating something that appears to be saying one thing about Obama, which reflects the point of view of right-wing crazies, you’re actually commenting on the crazies and not on Obama. The fear that the irony would be lost on people to whom there is no irony at all. The result was that Larry King and Charlie Rose and everybody else spent two weeks talking about irony, and I think it ended up being an education for the American people.

MJ: Switching gears a little, I want to talk to you about a particular illustration that you did for Mother Jones in our November issue last year. It’s of the Capitol Building waking up with a massive hangover. I’m wondering, first of all, how did you come up with the idea for this?

SB: Well, this went with an article. The piece was discussing what was going to have to happen now, that it’s sort of OK to be aware that there are consequences to 100 years of global warming. Even though things are pretty bad, there is still an opportunity to wake up and get things done. The challenge is to put a complex idea into a simple picture.

It also had to make the spread entertaining, exciting and get you to want to read the piece. So we have a big responsibility. Illustrators are sort of like the entertainers that get you into the tent to hear the lecture.

So here we have the Congress, so I thought a good solution would be take the building, because how are you going to show Congress? Instead of drawing Congress as cartoonists had for time and memorial—dressed in a string tie and frock coat and cowboy hat—to actually draw the building as a person.

So if you could take the Capitol dome and make it a head, then what you could do is maybe use the columns at the bottom as gritted teeth and then there could be a window with the hands drawing the curtains, and then through the window you could see all the shit.

SB: It’s been going on for all these years, so I’m showing you the cause and effect.

MJ: And how long does it take you, that process from coming up with the idea to having the finished product. What’s the time frame for that?

SB: You’d have to ask the art director what the deadline is.

MJ: Depends on the deadline.

SB: Is Tim going to hear this?

SB: Well, Tim if you’re hearing this, it takes weeks. We don’t get long deadlines.

MJ: Is there anyone you would like to draw more but you can’t because they’re not in the news a lot or enough?

SB: You know, I really would love to draw Mitch McConnell.

SB: Yeah. You know, he has such an interesting face. I would love to get some assignments to draw Mitch. I don’t know what it is about him, but he really looks like a wax work. The face has a waxy finish to it, and it never changes expression, and he looks like some kid of droid that got plugged in and sent out into the world to just sort of step on things. He just kind of stomps around on child healthcare and God knows what else. So Mitch is somebody I would definitely like to draw more.

MJ: Looking ahead to the next year, what would be the best series of events that could happen for you as a satirist?

SB: I would say as a satirist the best series of events would be the very worst things that could happen to America. So I’m hoping for a terrible time for satire.

MJ: You’re hoping you don’t get a lot to do.

SB: I’m hoping for a very successful presidency from Obama where we’re forced to focus on tiny, very nit-picky things. And basically a kind of left-of-center revival, where people say, you know, government actually can do things in people’s lives. We re-impose regulations on investors and investment companies. Most of all we develop a set of priorities where the things we need the most are truly addressed in a competent way. So we’ll start to clean up the environment, and we’ll have grown-ups in charge of foreign policy. Not a lot to ask. But chances are all of that will not happen, so that people like me will still have a chance to keep saying those things.

MJ: And to do wonderful satirical illustrations.