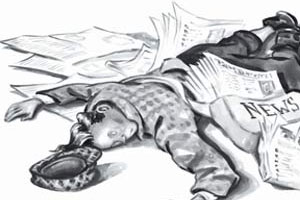 43% of Americans say it would hurt civic life “a lot” if their local newspaper closed. Yet when asked if they’d miss their paper, 42% say “not much” or “not at all.”

About 80% of news is originally reported by newspapers, according to former Los Angeles Times editor John Carroll.

Nearly 1 in 5 newspaper journalists has lost his or her job since 2001.

In April, Lou Carlozo, who wrote the Chicago Tribune‘s “Recession Diaries” blog, was laid off—and not allowed to post about it.

That same month, St. Louis’ Suburban Journals canned Todd Smith, a reporter who was shot last year when a gunman stormed a city council meeting he was covering.

Even 4 years ago, 37 of the 100 largest daily papers had no full-time investigative reporters.

Since 1985, the number of newspapers with Washington bureaus has dropped by more than 50%.

72% fewer newspapers and wire services cover Congress today than in the mid-1980s.

1/3 fewer newspaper reporters are dedicated to covering state capitols today than in 2003.

Nearly 2/3 of newspaper executives say they’ve cut foreign coverage in the past 3 years.

In May 2007, Pasadena Now announced it would outsource 2 local reporting jobs to India.

Michael Precker left his job as a reporter and editor at the Dallas Morning News to manage a topless club because “it got to be more ridiculous to hang on at a newspaper.”

A 2007 survey found that the most knowledgeable media consumers were regular Jon Stewart and Stephen Colbert watchers—tied with readers of newspaper websites.

The Internet displaced newspapers as Americans’ No. 2 source of news in 2008. TV is still No. 1.

By one estimate, an entirely Web-based New York Times could generate only enough money to support about 20% of the paper’s current staff.

Creating an endowment to finance the Times would cost an estimated $5 billion.

In June 2007, the Times moved to a new, $1.5 billion building. It’s since made money by selling its offices and leasing them back.

In August 2007, a Times op-ed called Mexican businessman Carlos Slim Helú a “robber baron.” This January, the paper took a $250 million loan from Slim at 14% interest.

The editor of the New York Times Magazine says a typical cover story costs more than $40,000 to produce—and that excludes editing, art, and fact-checking.

Annual % change for US papers 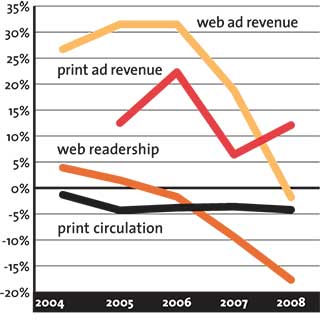 The American Society of Newspaper Editors recently took “paper” out of its name. Its president explained, “We are all way beyond ink on paper.”

France has offered its newspaper industry a bailout package worth $800 million, including free subscriptions for 18-year-olds.

A similar bailout for US papers would cost at least $12 billion.

Asked in May if he’d invest in newspapers, Warren Buffett said he “would not buy them at any price.” His business partner added, “It’s really a national tragedy…They kept government more honest than they would otherwise be.”

A recent study of government accountability around the world found a strong link between high levels of newspaper readership and lower levels of corruption.

An economist found that after the Cincinnati Post closed in 2007, fewer people in the area voted, fewer candidates ran for office, and incumbents were more likely to be reelected.

Before the 2006 elections, 30-minute local TV newscasts spent less than 2 minutes on election coverage. They spent 7 minutes on sports and weather.

Meet the new media elite predicting the end of everything—but their pet projects.

HAS SEEN THE FUTURE, AND IT IS…

Unpaid celebrity bloggers—like those on her site!

“There is going to be more content, not less.”

“Even the revolutionaries can’t predict what will happen.”

“Print is where words go to die.”

Ignoring print—but not his What Would Google Do?

Forrester Research predicts that just 4.5% of consumers will own e-readers like the Kindle by 2012.

In November 2007, Rupert Murdoch decided to make the Wall Street Journal website free. This April, he declared, “People reading news for free on the Web, that’s got to change.”

San Francisco Chronicle editor Phil Bronstein has suggested that people who don’t pay for news should be jailed.

In January, Google ended a venture to sell ads in papers. A month later, it lifted a ban on ads on Google News—whose content comes largely from papers.

Google CEO Eric Schmidt has said that except for reported news, the Internet is a “cesspool” of misinformation.

In May, the Huffington Post auctioned off an internship for charity. Its actual value was listed as $500. As this went to press, the top bid was $13,000.

36% of Americans say the press has “hurt democracy.”

Earlier this year, while working as a correspondent for Pajamas Media, Joe “the Plumber” Wurzelbacher declared, “I think media should be abolished from, you know, reporting.”

Lou Carlozo not allowed to vent: “The Final Recession Diaries Blog The Chicago Tribune Does Not Want You To Read,” True/Slant.com, April 23, 2009; email from Lou Carlozo

Cost of a cover story: “Gerry Marzorati on the Future of Long-Form Narrative,” Council for Advancement and Support of Education Editors Forum, March 31, 2009

Bailout for US papers: Newspaper Association of America

More newspaper reading equals less government corruption: “Are You Being Served? Political Accountability and Quality of Government,” The Journal of Law, Economics, and Organization

Cincinnati Post: “Do Newspapers Matter? Evidence from the Closure of the Cincinnati Post,” Sam Schulofer-Wohl and Miguel Garrido, Princeton University

Blog Bites Man: Arianna Huffington: “Hearing of the Communications, Technology and the Internet Subcommittee of the Senate Commerce, Science and Transportation Committee,” May 6, 2009; Jay Rosen: “Blogger vs. Journalist Is Over,” Press Thinking, January 21, 2005; Steven Johnson: “Old Growth Media and the Future of the News,” March 14, 2009; Clay Shirky: “Newspapers and Thinking the Unthinkable“; Jeff Jarvis: “Fast Company Dialogue: Is Print Dead,” Buzz Machine, December 7, 2005, and What Would Google Do?

What Kindle could do for the Times: “Sulzberger: ‘Wonderful’ Kindle Will Help The NYT Reach New Readers,” Poynter Online, May 6, 2009