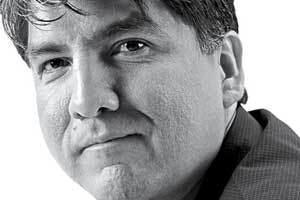 Read the condensed version of this interview here.

Sherman Alexie‘s literary ambitions often collide with his unofficial role as America’s most famous Indian author. So he suspects that his new short-story collection, War Dances, which features some distinctly unsavory Native American protagonists, might tick off sensitive readers. “I’m going to get grief from certain people about not having likable characters,” he says. “As an Indian writer I’m supposed to be showing us in our best light.” The 43-year-old has built his career on exploring the complexities and dark comedy of Indian identity. His first short-story collection, The Lone Ranger and Tonto Fistfight in Heaven, drew on his experiences growing up on the Spokane reservation in Washington. His 2007 young-adult novel, The Absolutely True Diary of a Part-Time Indian, tells the story of a shy, nerdy kid who leaves the rez for a suburban high school. Though his books can be heavy, they’re also funny. “People think funny is not serious,” says Alexie, who occasionally performs stand-up comedy. “Humor deals with our most serious problems.”

Mother Jones: On the campaign trail, Barack Obama was adopted into the Crow Nation and given the name One Who Helps People Throughout the Land. After that show of pandering, has he lived up to his name?

Sherman Alexie: [Laughs.] Well, first of all, these tribes that have given so many names and honorary memberships to people, they’re kinda trampy. I think some tribe adopted Norman Schwarzkopf, too. It’s the Indian version of getting a Hollywood star. So far Obama’s done nothing to be better or worse than any other president when it comes to Indians, which is what I suspected, because we represent no important voting bloc. His name should be One Who Helps Liberals and Moderates Throughout the Land.

MJ: A lot of people want to claim Indian identity. Have you followed the case of Ward Churchill, the former University of Colorado professor who claims Indian ancestry and was fired after making inflammatory remarks about 9/11?

SA: The tribes he claims he belongs to don’t even claim him. Let’s put it this way: You guys are all way behind in terms of what you know about his identity and his politics. Indians have been having those discussions since the beginning. His words got him in trouble, but he had lost plenty of Indian credibility before he lost white people’s credibility.

MJ: It seems like Indians were more present in the political and cultural mainstream when you were growing up in the ’70s than they are today.

SA: It was one of those eras where there were some incredibly charismatic Indian leaders. And I think those same kinds of charismatic people do other things now. They act, write, paint. The fight of the ’60s and ’70s was for the right to be human. And now we are being human.

SA: It’s gigantic. But in some sense it’s why we’re not visible in the mainstream. We’re not dangerous. Instead of guns we carry poker chips.

MJ: You’ve done some activism work on salmon and dam removal on the Lower Snake River.

SA: I grew up in a culture where salmon is king. But I’ve never known them, because of the Grand Coulee Dam. So I was born bereft. Now I’m seeing a country that is going to be bereft. So I guess from personal experience, I don’t want the whole country to have to deal with the kind of pain and mourning that we salmon people always have to deal with.

MJ: You’ve said before that environmentalism is kind of a luxury. Is it still when it concerns the livelihood and way of life of a whole people?

SA: It’s still kind of a luxury. Would I be fighting this fight if I was living on the rez dealing poker? I don’t know. I think I’d probably be more worried about my job. I have a lot of luxuries and privilege.

MJ: You recently got attacked for calling the Amazon Kindle elitist.

SA: I got hundreds of emails insulting me, accusing me of being some caveman. I am by no means a Luddite. I have two iPods. I have a cell phone. I have cable TV, HDTV! I had some French friends in town last week. The man said, being French of course, “When you’re in a bookstore and you’re smelling the book and you’re touching it, your senses are engaged.” His English was a little off. He said, “It’s like—what do you call that word?—the preparation for having sex.” I said, “It’s like foreplay.” And he goes, “Yes!” Amazon had given me a Kindle, and he grabbed it, and he goes, “This is not sex!” Then an American friend of mine took the Kindle home for a night; he wanted to play with it. He came back and he said, “It’s like masturbating with a condom on.”

SA: We’re guys, of course, but it’s the whole notion of reading a book, that it involves all of your senses. And to think I might worry that a corporation might not have our best interests at heart. Imagine that. But it’s about conservation as well. If I had been talking about drowning polar bears, people would have been weeping with me. But nobody recognizes that a bookstore or library can also be a drowning polar bear. And right now in this country, magazines, newspapers, and bookstores are drowning polar bears. And if people can’t see that or don’t want to talk about it, I don’t understand them at all.

MJ: The Absolutely True Diary of a Part-Time Indian was banned in some school districts. How did that feel?

SA: It means I did something right. The book has never been banned or challenged in a poor community, because the crap they’re dealing with makes the stuff in my book look like nothing. I just know there are kids who need books like this.

MJ: Did you ever think about toning it down for a younger audience when you were writing the book?

SA: Actually, I did. I took out some stuff, but then my editor made me put it back in. It’s realism. I grew up in a little white, conservative town. I knew those kids. They were my best friends. They were my lovers. I wrote what I know. For those conservative parents out there who think their kids aren’t like this, they’re not talking to their kids. In some ways it makes me sad. Like there’s this epic distance between parents and their children. And they don’t even realize it.

MJ: Your depiction of life on Indian reservations is that it’s very much apart from life off the rez. Has the Internet changed that?

SA: Every Indian kid has access to MySpace and Facebook now. But that doesn’t mean they have access to books and great teachers. This idea about bringing digital tech into schools is great, but once again I’ll say that this is not how people actually learn. We learn with our hands. You can pump millions of dollars into a school, and nothing will change. Throwing a computer at a kid does nothing to help him.

MJ: There’s a line that I liked in your poem “War Stories”: “I think that violent men will always find logical and rational and emotional and compelling ways to justify their violence.” Your characters in War Dances do just that.

SA: There’s this whole notion of being an Indian—the idea that “warrior” is a positive description of us. When an Indian guy does well, he’s a warrior, even now. He could be a computer salesman, but if he does well, he’s a warrior. I’m not a pacifist by any measure, but I’m also fully aware that the reasons I might go to war could be very dubious.

MJ: One of the characters in War Dances riffs on the importance of pop music in his life. Is music that important to you?

SA: Well, I agree with him, until he concludes that the making and distribution of pop music is more important than the people he’s around. I guess you could say he let music become his addiction. Might as well have been booze. I’ve read Chuck Klosterman, who I love, and that other book, Love Is a Mix Tape. But as I was reading those books, I was also seeing myself in their characters, in their pop culture obsessions, and I started thinking, we’re all just a bunch of drunks. We’re the guys at parties that everyone hates. Insufferable!

MJ: I love the part where the character gives his teenage daughters each an iPod loaded with thousands of his favorite songs.

SA: I had an acquaintance who did such a thing. His children actually liked it. But if my dad had done that to me I would have killed him. At some point I realized about that character, instead of making another mix tape, why don’t you take a walk with your wife?

MJ: You’ve said that when you were younger you saw yourself as oppressed. Do you think you’ve gotten less angry, or just found a way to express your anger through humor?

Read the condensed version of this interview here.