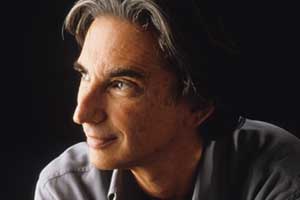 Forget childhood piano recitals. Could there be a more terrifying prospect than discussing classical music with one of our greatest all-time conductors, Michael Tilson Thomas? I consoled myself with the fact that as music director of the San Francisco Symphony, MTT has picked up Leonard Bernstein’s baton and made it his mission to make classical music accessible to the masses. In both PBS’s Keeping Score and public radio’s The MTT Files (a must-listen: his show on James Brown), he breaks down compositions and musical history. The SF Symphony has kid-friendly programs. He runs the New World Symphony, an academy for young prodigies. He even harnessed YouTube to cast an orchestra that came together for three days of practice before playing Carnegie Hall. And in 2005 he produced an homage to his grandparents, Boris and Bessie Thomashefsky, Yiddish theater stars so famous that 30,000 people attended his grandfather’s funeral. And President Obama recently awarded him the National Medal of Arts for “for his commitment to engaging new artists and audiences in the exciting world of contemporary music.” MTT graciously invited me to his home. Little did either of us know it would turn into a two-hour talk both remedial and revelatory (for me). He seemed happy to conduct. Read the extended-play version at motherjones.com/MTT.

Mother Jones: What’s the biggest hurdle to get people to appreciate classical music?

Michael Tilson Thomas: My grandparents were major theater people—Yiddish theater, which was workers’ theater, radical theater—engaging the audience, which was largely an immigrant audience, with the social issues they were encountering in the United States. The way you survive in the performing arts is by having a sense of your audience, and doing things which entertain and satisfy the audience, but in a more important way, cause the audience to question many things. This is what my grandparents did. So part of my mission is simply that: to bring the world of the arts, particularly classical music, closer to people so they don’t feel that it is something remote that they have to specially prepare themselves for, or dress up for.

MJ: Are there virtuosos who had little or no family history with music?

MTT: Yes, and likewise extraordinary connoisseurs whose background was blue collar and who got into music because of their involvement with mathematics or science. If kids are given the chance to experience this realm at the early ages, seven or eight years old, they can pick it up right away.

MJ: Is it ever too early to introduce your kids to music? What do you think of the Baby Mozart phenomenon?

MTT: My parents told me that when I was a kid, three years old, I couldn’t walk by the piano without reaching up and trying to play a few notes on it. There are kids who are just drawn to listening to music and dancing to it and trying to conduct. I think it’s wrong to force any kind of agenda on a child, but it’s wonderful to give them the opportunity. My parents made listening to music a part of our daily routine.

MJ: So when a child asks their parents why they should keep up their lessons when they’re never going to be as good as MTT or James Brown, what’s a good response?

MTT: You’re talking about a phenomenon which interests me a lot, which is loneliness. A conundrum of music is that music brings people together, yet to become a skilled musician involves a certain amount of lonely time in which you’re just figuring it out, practicing. So, one of the things I hope to do is to try and establish communities online. So you don’t feel, “Oh my gosh, I’m in my practice room all alone, and who really cares what I do, and am I doing it right or wrong?”

MJ: Did casting a regular symphony prepare you to cast the YouTube symphony?

MTT: It was wonderfully absurdly different in that in auditions for a major symphony, you hear candidates play behind a screen—you know nothing about them. For the YouTube symphony you saw everyone and their dogs and their dorm rooms and their significant others, cooking and walking by in the background. But you had to pick up as much as you could from one snippet.

MTT: I think so. Also a curious skill that has to do with kind of perceiving the past, the present, and the future at once, and being aware of how many different reaction times are present in the orchestra.

MJ: Conducting is a great workout. Should there be a Wii Fit MTT program? Rather than Guitar Hero—Conducting Hero?

MTT: Maybe, but the one thing older conductors have in common is tendinitis. Well, sure, because how many 64-year-old pitchers do you see on the mound? Not any. Some of what you’re doing in conducting is this accelerating your arm to just a fixed point. Contraction—stop. Accelerate—stop.

MJ: Watching the Keeping Score on Shostako-vich and the “dead end” that he kept coming to in Symphony No. 5, it occurred to me, “Is that the first three bars of the Darth Vader theme?”

MJ: Is it hard to put together a season that gives people pieces that they’re comfortable with and pieces that are more challenging?

MTT: It’s easier to interest a conservative audience in pushing the musical boundaries than to involve a young audience used to very noisy, assertive music in something like Schubert or Bach because the further back you go, the less bells and whistles there are. So you’re really coming down to just what the notes themselves say.

MJ: You have two fabulous titles, maestro and chevalier. Ever tire of them?

MTT: Well, I have a strange situation as far as my name is concerned, because of course, what should my name really be? Is it my traditional Jewish name? Or this curious name my parents put together, partially to honor departed family members, and partially to keep me away from the absolute craziness of my grandparents’ fame and the intrusiveness of their fans? So many people call me “MTT,” and some do say, “Oh Maestro,” and some are comfortable calling me Michael.

MJ: The way that most of us are taught music is “Here, play this.” I remember struggling for a year with a Clementi piece. Had I known anything about the history of it, I would have at least felt more emotionally attached to the piece, even if I couldn’t have conquered it technically. Why do you think the history of music has been so separated from the execution of it?

MTT: I am still a long way from achieving this, but there should be some kind of teaching music, which would start back at the beginning, with the very simple plainsong melodies, features that are present in certain kinds of folk traditions, and then just gradually build up layers of intricacy and more deliciously ambivalent things. Pop music, which I deeply admire and wish I could play better than I can, is based on expressing one mood, one feeling at a time. Classical music is by its very nature involved with different kinds of music, constantly transforming one another, which is more akin to the way our experience of life really is. If you’re alive, you have all the experience necessary to understand classical music.