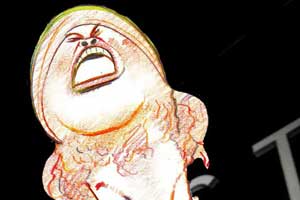 Each day brings fresh proof to my feeling that orthodoxy of any kind is simply another word for “learning disability.” It’s in the nature of orthodoxy that one is discouraged to process new information objectively: The world MUST be as previously learned. Hence new data, rejected, leaves the poor person, be it a driver, a doctor, or a politician, severely handicapped.

Rand Paul, big winner in the Kentucky Republican Senate primary, immediately throws his campaign under the bus by revealing the seldom-stated libertarian doctrine of limited government. This would include the disavowal of things like Social Security, Medicare, and the Civil Rights Act. Things, LIBERAL IDEAS, that almost everyone in the country subscribes to. But not Rand.

Then there’s Helen Ukpabio, the charismatic Nigerian witch hunter and subject of an HBO documentary. It seems that she has been instrumental in hundreds of witch burnings, tortures, and killings, usually of children who are troubled or behave differently. This week, she brought her ideas to the US. She is suing those who are interceding on behalf of these children.

In a lawsuit, Ms. Ukpabio alleges that the state law infringes on her freedom of religion. She seeks 2 billion naira (about $13 million) in damages, as well as “an order of perpetual injunction restraining the respondents” from interfering with or otherwise denouncing her church’s “right to practice their religion and the Christian religious belief in the existence of God, Jesus Christ, Satan, sin, witchcraft, heaven and hellfire.”

In other words, in the name of religious freedom, Ms. Ukpabio seeks a gag order on anyone who disagrees with her.

The cherry on top is last night’s finale of Lost. The viewers of this show have become accustomed to highly implausible plot situations that are resolved by even more improbable ones. The final show was tuned into by millions eager to see how the group would be rescued (SPOILER ALERT), only to find that, yes they were rescued all right… but by God! They all have a sentimental farewell in a church somewhere in the sky as the lead character’s dead father opens the church doors to the blinding light of Heaven. Not one was left behind.

What a relief. Solving problems while being alive seems like such a drag by comparison. Lots of people think like this when things get tough. So, I’m sure glad TV is there to help them with the idea of death as a coping mechanism.