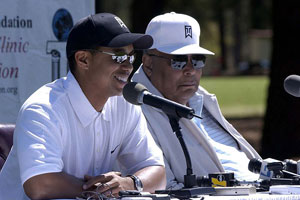 Here’s a story that gets me thinking every Father’s Day.

Twenty years ago, on a public course in Los Angeles, I was approached by an old black golfer who had spotted my notebook. He told me to drop whatever I was covering—a pretty good women’s golf story, as it happened—and track down this 15-year-old phenom who would soon overwhelm the game. I edged away, but he was insistent. The key to this kid’s success, he assured me, was the furious ambition of his father, a former Army colonel. His defining moment had come when the boy was five or six, and Dad, in civvies, took him to a military golf course. Two white admirals spotted the prodigy and said, ”That’s some little golfer you’ve got there, Sergeant.”

Their assumption, based on his color, that Earl Woods was an enlisted man only further fired his determination to send his little Tiger out to dominate the world (so the old golfer told me). Earl, who died in 2006 at 74, once said of his son: “There is no limit because he has the guidance. I don’t know yet exactly what form this will take. But he is the Chosen One. He’ll have the power to impact nations. Not people. Nations. The world is just getting a taste of his power.”

Unfortunately, I managed to shake that ancient mariner and so blew my shot at the Big Story, but he comes to mind every Father’s Day when I start to think about the complex impact dads and their dreams, even obsessions, about sports success have on their sons (and ever more often now, on their daughters). Almost always, I suspect, Dad believes that what he does is in the best interests of his kid, which is what makes this such a poignant—as well as poisonous—subject, mixing as it does short-term sports success and (often) long-term unhappy lives.

My Dad, the Book Player

As a kid, I only wished that my Dad was less bookish, more ballish. We never had a catch. When I was thirteen, I managed to drag him to one Yankee game where he made a valiant effort not to show his boredom. That was it when it came to sports. Of course, we went to libraries almost every week and we talked all the time—just never about sports.

He never took me out and taught me how to throw a baseball. (A classmate saved me from throwing “like a girl.”) Thanks to Dad, I missed out on all the early fundamental skills, particularly when it came to ball-handling and team play. When, in my teens, I finally got my athletic freak on, I skipped the obvious sports of my peers, going for tennis, handball, and martial arts. More recently it’s been yoga, Pilates, and biking. Looking back, I can see that starting into sports later had its advantages. I was enthusiastic and fresh when so many of my peers had already had it. For them, and they were often far better jocks than I, it’s been over for years. They’re spectators now—particularly the ones who played for their fathers.

As a father myself, I went to all the Little League baseball games, youth soccer games, and then high school field-hockey and track events I could make, but my years as a sports reporter—and maybe my own Dad—had left me without the slightest urge to be a sports dad. I even pulled my son Sam out of Little League because of his uber-macho coach—and he seemed relieved. When, later, I refused to let him play high-school football, it was a different story. He’s still annoyed—and he may be right. But covering high school and college football, I’d just seen too many kids play hurt and stay hurt. Sam went on to become a shot-putter, muscles he puts to use now, over 40, in rough touch football games. Susannah was an all-state hockey forward. She’s still a passionate athlete.

Meanwhile, we all wonder whatever happened to the stars of their childhoods, the ones who were driven mercilessly like that Little League coach’s son. In the final inning of a tight game with winning runs on base, I remember that coach walking out to the mound to tell his 11-year-old boy that he would now find out if he was a man. Whatever he found out in that moment, I’d put my bottom dollar on the likelihood that he became yet another in a long line of kids who burned out early, or got hurt and quit sports, just to get out from under the pressure of dad’s expectations.

Then there are those kids, often with particularly determined dads, who begin a career of sucking up all the resources, energy, and coaching available (while those “cut” from the team grow fat). Typically, the most celebrated athletes of my time—Tiger Woods, Andre Agassi, Shaquille O’Neal, Wayne Gretzky, Michael Jordan, Barry Bonds, Dale Earnhardt, Jr., Ken Griffey, Jr., Payton Manning, and Bret Favre, to name only a few—had strong fathers who drove or led or guided them in disparate ways.

Dale, Jr. was the recipient of The Intimidator’s tough love. The old man, a NASCAR idol, was distant and demanding. After Big Dale crashed and died, Junior became NASCAR’s most popular driver without ever showing much of Dad’s skill or killer instinct. Junior rarely wins, but fans seem to understand what he went through and empathize. He’s always the sentimental favorite because, I suspect, so many in the crowd had similar dads. With Junior, there’s the sense that drive he must, but he’d rather be playing his guitar or his video games.

Lance Armstrong has written candidly about a brutal stepfather who seems to have propelled him to seek the physical pain of triathlons just to blot out his psychic pain. Lance drove through cancer, and he won a record seven Tours de France, but in his hard-edged restlessness, you can still feel the boy pushing himself beyond all limits to satisfy, or prove something to, someone else.

The literature of the sports dad has trended ever darker over recent years. Poet Donald Hall’s elegiac view of baseball as “fathers playing catch with sons” has given way to the current rash of cautionary tales of Pee Wee pops beating their kids to make them “winners” or beating on their kids’ coaches for not giving them more playing time. (One dirty little secret in the performance-enhancing drug story of recent years is how often dads ignore, enable, or sometimes even directly finance chemical help for their kids.)

Over the last several years, talking to high school students about Raiders Night, a young adult novel of mine that deals with a football player and his driven dad, I’ve been struck by how regularly boys tense up when the subject of just why they play arises. Remarkably often, once you get past the easy answers—the prestige of the varsity, the thrill of contact, the friendships, and the girls—it comes down to seeking the love and attention of dad. When dad manages to use his son as an avatar in his obsessive sports dreams, that love and attention become a whip and a cage. Ask Tiger.

Last Father’s Day, Tiger was already looking shaky, coming off knee surgery, missing the cut at the British Open, and blowing a final-round lead at the PGA Championship. He didn’t win a single major tournament in 2009. Then, on Thanksgiving, as all the world now knows, he crashed his car and his life.

As the scandal spread, I happened to be reading Open, the compelling autobiography of tennis ace Andre Agassi. The book’s overwhelming message concerns the power of his hatred for his game and the life it imposed on him, thanks to the dad who drove him onto the court. I wondered if Tiger might finally have arrived at a similar landing spot with a similar set of feelings. Both men were child prodigies, driven relentlessly by fathers who were intent on living through them. At 21, just about the last time Tiger was casually accessible to the media, he seemed age-appropriately raunchy, something of a “chaser.” And then the wall went up, and Earl, Nike, the golf establishment, and a small cadre of handler/friends proceeded to shape his image and life. How controlled Tiger must have felt, how small and trapped.

In that Sportsworld version of prison, how else could Tiger express himself, declare his independence, perhaps even shout for help, and dig his way out, if not through outrageous misconduct?  Agassi abused drugs. Tiger abused sex.

Tiger Woods is a father himself now, and trying at 35 to claw his way back to the top of the leader board. I’d be surprised if he makes it. I’m not convinced that he really wants to. I wish him well.

I know there are concert pianists, rocket scientists, and brain surgeons who had the equivalent of sports dads. Who knows what I’ve done (what my kids have done, what my grandkids are starting to do) to get love and attention. But after so many decades in the Game, I think the father-son dynamic is more vivid and charged in sports because the relationship blooms in all its loving and violent forms at such a vulnerable time in a kid’s development. That’s why so many grown-ups adore or despise sports.

Looking back, I wonder if I was the lucky one after all. When it came to sports, I experienced benign fatherly neglect. That’s undoubtedly one reason I’ve never had a decent jump shot. Fair enough.

Robert Lipsyte (Robertlipsyte.com), a long-time sports and city columnist of the New York Times, is the Jock Culture correspondent for Tomdispatch. He is author of the current young adult novel, Center Field.