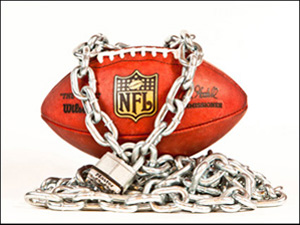 There’s nothing like a little dust-up between millionaires and billionaires to start us thousandaires yawning. And when the upcoming pro football season is in danger of being cancelled because of it, we’re likely to say: a plague on both your mansions.

Too bad, because the current struggle between labor and management in the National Football League not only reflects the current attacks on unions across the country but conjures up, even if in cartoon fashion, some crucial American issues: racism, classism, sexism, recreational violence, and the health-care gap. No wonder football seems to have replaced baseball as the national pastime.

While the legalities of, and mathematics behind, the issues at the heart of the NFL dispute may be complex, the basic issues are not. The league’s owners cry economic woe, while refusing to open their books. They insist on adding two games to the present regular season of 16 games and at the same time are trying to reduce the players’ share of revenues. Moreover, they have been remarkably unwilling to guarantee long-term health benefits to the players, even as evidence mounts that dementia and early death are linked to the sort of brain trauma commonly suffered in football collisions.

It’s not exactly a fair fight, which of course is why unions were invented. It’s estimated that half of the NFL owners are worth at least a billion dollars each, while slightly less than half of NFL players make more than a million dollars annually. The average player’s career lasts fewer than four years.

Most traditional sports media—while claiming to represent those thousandaires, the fans—have framed the battle as one between rich, greedy young men versus very rich, very greedy older men. The young men, so goes the present media line, were overpaid in the good times, and now, like everyone else, must give back in the economic bad times for the sake of the game. Not surprisingly, this greedy v. greedy take on a football dispute, which threatens the upcoming season, is hardly likely to engage the empathy of TV viewers who just want to watch the game as a respite from joblessness, foreclosure, or the problems that come from inadequate health insurance.

In case you haven’t noticed, this isn’t all that different from the way the larger labor struggles of American society have been framed recently. Greedy, overpaid municipal employees, for example, watching the clock until their bloated pensions and benefits kick in, are bleeding beleaguered governments supported by the rest of us. Okay, your basic offensive lineman isn’t exactly like a beleaguered teacher or nurse, but the key element of the plot to destroy his ability to bargain collectively against more powerful forces is the same: make him the alien other, make him different from us.

Back when we thought professional athletes were merely bigger and stronger versions of ourselves and the teams they played for were extensions of our pride of place, labor unrest in sports was personal and painful. Fans wondered how a player could hold out for more money when they would have played the game for free. How could a league threaten to cancel a season? Didn’t it know the games gave rhythm to their lives?

In more than 50 years covering sports, I find the most striking change is in the attitude of fans toward the athletes. Fans have, I suspect, lost most of the emotional attachment they once had for “their” players and much of the old extended-family feeling toward their teams as well. And there’s some justification for that: they’ve been hurt too many times by callous trades, players selling themselves to the highest bidder, bad behavior of every sort, and franchises simply picking up and moving elsewhere.

But there’s something larger going on as well, echoed by the seemingly successful latest attacks on organized labor highlighted by the recent demonstrations in Madison, Wisconsin, and in the creation of the Tea Party League by those seemingly everyday folk who just happen to be funded by the same kind of robber barons who blackmail cities and states into paying for their ballparks.

Whether you’re a TPL or an NFL fan (or both), the odds are increasing that you’ve lost connection to the players and instead begun to identify with the powerboys, the owners, whether of the corporate nation or the National Football League. This is hardly a phenomenon that began with sports, but it’s vividly accessible in the simpler, more clear-cut world shaped around the player-owner-fan dynamic.

I first saw it revving up while covering our previous national pastime, baseball. In 1957, the year I joined the New York Times’ sports department, two of the city’s three baseball teams, the Dodgers and the Giants, decamped to California for better stadium deals. Brooklyn Dodgers fans seemed most bereaved and outraged. The team’s players had often lived in their neighborhoods. Their vicissitudes had made possible conversations that crossed the usual class and racial divides. In churches and temples, clergymen led prayers to end losing streaks. Brooklyn was proud of its progressive history—only 10 years earlier, Jackie Robinson had broken the major league color barrier at Ebbets Field. More African-American players soon joined him.

This was not the first franchise shift (Boston, St. Louis, and Philadelphia had all moved earlier in the 1950s) but this one got the most attention, perhaps because even then there were so many fine writers and academics in Brooklyn. The discussion has never abated.

The flight from Brooklyn to Los Angeles became a symbol of fan betrayal.

It was in those last months before the move, when the heckling from the stands grew vicious, that I first sensed the old order beginning to fracture. Those were, of course, just the initial fissures. Since then, the economic and social gap between fan and jock has widened to a yawning abyss as the millionaires and billionaires appeared and sports stadiums increasingly became the preserves of those wealthy enough to fork over staggering sums for seats.

Meanwhile, the financial value of sport teams escalated and the role of sportswriters as information couriers between players and fans became increasingly obsolete. TV freed athletes from needing print journalists to present them to the public, and most TV sports journalists—the Daily Beast writer and editor Bryan Curtis has called sportscasting “a halfway house for half-wits”—were thrilled to remain part of the show on the industry’s terms.

From the athlete to the owner, sports increasingly became a matter of branding. Athletes could work to control their images through ads and paid appearances. Nowadays, blogs, tweets, and Facebook pages give teams and athletes direct access to fans. They can announce (and spin) their own news. There are tightly-controlled and infrequent mass media conferences. One-on-one interviews are negotiated with agents and public relations advisors. Sports writing has become another department of celebrity journalism.

Attempts at progressive activism within sports tended to be co-opted by cash; product endorsement money (think of those Nike ads) has usually kept even socially conscious athletes quiet. Few successful watchdog organizations were ever formed, though Ralph Nader’s revived League of Fans may be something to keep an eye on. Its first public statement was a call for the end of college athletic scholarships, a fundamental building block of the pro game.

The violent excitement of football, its aggressive marketing, and the solidarity of the owners—many of the more recent ones new-money entrepreneurs—were all factors that helped push the game past baseball in audience and revenue. It captured the techno-smashmouth-imperialism of an empire that didn’t quite know it was fading. Every mad-dog linebacker was an avatar for hedge-fund managers.

Some days I think that the worst-case scenario—no National Football League games this year—might be a blessing, especially if it were extended down through college and high school into the peewee leagues. It would be a year in which we could study those leading American issues that football vivifies so well.

Take lack of proper healthcare. No one is discussing steroids at the moment, although the freakish size and musculature of so many players would seem to indicate either the arrival of ever more sophisticated performance-enhancing drugs that escape detection or testing that is less rigorous than we have been led to believe.

The most pressing immediate concern, however, is head trauma. It usually becomes apparent years after retirement, but it begins in childhood when pounding on more vulnerable brains leads to lasting damage. A year off would give everyone a chance to let the steroids drain out and the testing for head injuries (even among youngsters) begin.

The classism and racism in pro football is almost too obvious to be worth mentioning. That the players are now predominately African-American, many of them sons of the underclass, may make this revolt of the gladiators even harder for the entitled white, ego-driven plutocrats—not to mention the fans, predominately white and ever more likely to identify with the positions of the owners in this dispute. Otherwise, how do you explain the phenomenal expansion of the fantasy leagues in which every fan gets to be both owner and general manager of his or her own team?

And of course, it hardly needs be said that sexism remains pernicious, ranging as it does from those endless filler shots of hottie cheerleaders to a continuing pervasive discrimination against female college athletes which is frequently an attempt to protect the existence of large college football teams. Title IX, the federal law mandating fair play for women, requires an equity between male and female athletes. To balance their 100-plus squads of football players, college athletic departments routinely lie about the number of varsity female athletes they support.

And then there’s the violence, on field as well as off (about 20% of NFL players have arrest records, according to articles and a book by investigative reporters Jeff Benedict and Don Yaeger); and don’t forget in the living room—domestic abuse hotlines light up after big games. Is it the gambling, the liquor, the testosterone?

Maybe we should be rooting for the labor impasse after all, at least through the coming season, during which we could learn some new football cheers:

Robert Lipsyte is a former New York Times sports columnist and Jock Culture correspondent for TomDispatch.com. His new memoir, An Accidental Sportswriter (HarperCollins), has just been published. For a TomDispatch video sneak peek at the book, click here.