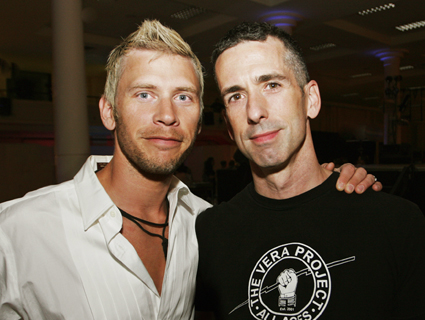 Internet memes come and go, but journalist Dan Savage wants the “It Gets Better Project“—his viral video campaign to reassure distraught gay and lesbian young people—to stick around forever. To help it along, he’s expanded the enterprise with a recent book, It Gets Better, which includes contributions from David Sedaris and Michael Cunningham. Tonight on MTV (11 p.m. everywhere), he and his husband, Terry Miller, narrate an hourlong special of the same name. And starting March 27, Savage—who edits the Seattle weekly newspaper The Stranger and pens the popular syndicated sex column “Savage Love”—will host a new weekly MTV series called Savage U, wherein he dispenses advice on the topic to university students all over America. Savage also famously turned Rick Santorum’s last name into a sexual neologism/Google bomb after Santorum compared gay sex to “man on dog” sex. I got Savage on the line to chat about his efforts to make life better for gay kids—and how he’s feeling about Santorum‘s recent surge in the GOP primaries.

Mother Jones: Now that the initial buzz surrounding “It Gets Better” has died down, how are you going to keep up the momentum?

Dan Savage: Our goal isn’t to maintain that kind of fever pitch. The goal is to build and maintain these videos and all the support in them for LGBT kids who are growing up right now: 13-, 14-, and 15-year-olds; people who are nine years old right now but who will see these videos in five to six years. We want to make sure that videos are still being made and that LGBT kids know how to find these videos, how to find us.

MJ: What was behind the decision to do this MTV special?

DS: We’re going to reach more people in an hour on MTV than we’ve reached so far in this campaign. The people we’ll reach specifically by partnering with MTV are 12 to 18 years old. We’re trying to help humanize lesbian, gay, bi, and trans kids. To show people who don’t know people who are LGBT. MTV has always included gay stories, like putting gay people on a dating show and treating it like it’s not a big deal. Most of what MTV has done is taking gay people on the ground and showing how gay people get to be gay people.

MJ: It seems that the MTV special also has value for straight kids, who might otherwise not know how best to handle a friend coming out.

DS: I hope kids take that away from watching the program. It really took me back to standing on the edge of the cliff and forcing myself to jump. Forcing the words out of my mouth, I know how hard that was. A lot of people think that telling people you’re gay is something someone might say just to get attention. I think watching what Greg [one of the people profiled in the MTV special] goes through, people realize that’s not the case.

Savage especially likes the video by Gabrielle Rivera: “She said, ‘It doesn’t get better. What happens is you get stronger.’ And I loved that idea.”

MJ: Why write a book?

DS: Some kids can’t afford to leave an incriminating browser history. Those kids might feel safer slipping into a school library or public library, pulling it off the shelf, reading it, and returning it.

MJ: So if that kid only has time to read one essay, which one should it be?

DS: Gabrielle Rivera, a Latina, lesbian poet in the Bronx, did a wonderful video. She watched the first videos and she got angrier and angrier about straight parents who were doing the bullying. She made this video where she said, “It doesn’t get better. What happens is you get stronger.” And I loved that idea. I love the way she put it. It’s the Latina, lesbian Bronx way of saying it gets better. She put it on their own shoulders.

And A.Y. Daring, an African Canadian girl growing up in Canada, where she never thought anybody was black and queer like her. And then she finds the oldest LGBT organization in the whole of Canada is in her college in Ontario. What she says is so smart and beautiful and inspiring—that the people who would love and support her were there all along, just waiting for her. So many LGBT kids feel isolated and alone, but we’re all out there to meet them.

MJ: The “It Gets Better” campaign reaches tons of younger adolescents, some of whom are then introduced to your advice column, which can be pretty R- or even X-rated. Is there an age at which you think people are too young to be reading about kinks?

MJ: Okay, given your sordid past with Rick Santorum, I have to ask how you feel about Santorum’s recent hot streak in the GOP primaries.

DS: I am freaking out. You might be scared, but I’m the one who’s going to be audited every year! On the one hand, I just feel like because of the comments he’s made about birth control that he just cannot get elected, so part of me thinks “God, I hope he’s the nominee.” And then part of me thinks that if he’s the nominee and the economy tanks, then somehow he’ll wind up in the White House. I was one of those people that had hoped for McCain when he ran for the nomination—and I don’t want to whistle past that graveyard again.

A selection of “It Gets Better” videos:

The original, from Forth Worth, Texas, city councilman Joel Burns: