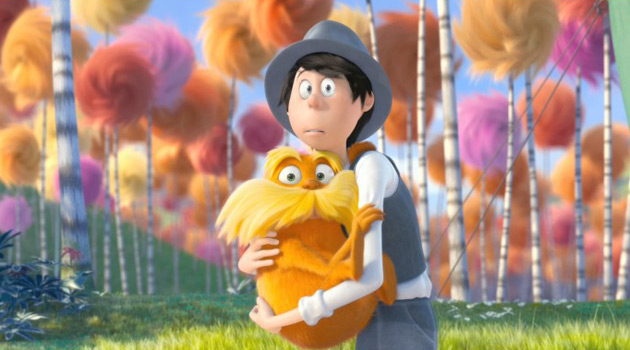 What to make of the far-left agenda of Illumination Entertainment‘s adaptation of Dr. Seuss’ The Lorax? For starters, the new animated film promotes a worldview that elevates the Earth above humankind and private industry. Economic growth is maligned as a force for evil, while those so-called Truffula trees are put on a fluffly, polychromatic pedestal. Successful businessmen are demonized as Orwellian overlords and planet destroyers. And the movie even has the gall to glorify—gasp!—single moms.

These are some of the ways in which the inevitable conservative freak-out will manifest. Lou Dobbs on Fox Business has already started being a Brobdingnagian urethra about this movie, which he quickly condemned as “insidious nonsense from Hollywood.” So, yes, The Lorax will feel like nefarious agitprop to those who exist in a world where anything short of being a total ass to trees is akin to letting the terrorists win.

For more on The Lorax, check out Kate Sheppard’s piece on the staggering PR irony in the movie.

For what it’s worth, liberal devotees of the famous children’s book are all frothy at the muzzle as well. Since its publication in 1971, The Lorax has been holy writ to those who like their children’s literature with progressive convictions. (Seuss sardonically called the book “propaganda.”) And as Mother Jones‘ resident Lorax expert Kate Sheppard reported, environmentalists and fans of the source material have for months expressed dismay over the film’s self-parodying cross-promotion (which includes peddling “Truffula tree friendly” SUVs) and the advertisements’ dilution of the story’s green message.

But once you cancel out the drone of partisan hoopla, what you have is a high-tech, big-hearted update of the beloved Seuss fable.

Directors Chris Renaud and Kyle Balda—both of whom worked on 2010’s Despicable Me—transform The Lorax into a pop-rock musical laced with manic energy and topical humor. Though purists probably won’t be pleased to discover that Seuss’ enviro-gloom has been swapped for guitar riffs, 3-D animation, and a happy ending, viewers will indeed notice that the book’s core remains intact.

The Once-ler (a classic character voiced by Hangover funnyman and Daily Show alum Ed Helms) travels to a glistening countryside untouched by industrialization. The ambitious and wide-eyed young man begins chopping down lush Truffula trees with the aim of mass-producing Thneed apparel. And thus the Lorax (Danny DeVito—an ace casting choice, given the fact that he looks for all the world like the fictional critter he portrays) swoops in to “speak for the trees.”

Because the original text is only a few dozen rhymes long, the plot was beefed up for Pixar-conditioned audiences: The nameless boy in the book is now Ted (Zac Efron), a kid who’s determined to revive the decimated Truffula tree population in order to woo girl-next-door Audrey (Taylor Swift). They reside in an artificial, Truman Show-like town named “Thneed-Ville,” where fresh air is retailed in beer bottles and your every move is video-monitored by the authoritarian, mega-rich mayor O’Hare (fellow ex-Daily Show player Rob Riggle).

The Once-ler, having been consumed by greed, struts down a lonely, palatial corridor with a “Too Big To Fail” poster hanging on the wall.

Most importantly, the movie is not the wholesale desecration of Seuss’ sacrosanct text that many had feared. In spite of action sequences that play out like Incredibles knock-offs, the adaptation is generally respectful, and some of the animation is downright brilliant. (The Truffula trees pop with texture and fantastic color.)

The Lorax still doesn’t come close to entering the pantheon of truly great computer animated films. Really, it’s the CGI-picture equivalent of Jennifer Love Hewitt: amusing and well-meaning, but not particularly deep or memorable. The film’s satirical jabs are slight but serviceable. (For instance, the Once-ler, having been consumed by greed and his streak of “growing the economy,” struts down a lonely, palatial corridor with a “Too Big To Fail” poster hanging on the wall.) The voice acting is spirited, but nothing revelatory. And the story relies more on Seuss nostalgia than it does on originality or cleverness.

That said, there is a distinctly human touch and gratifying earnestness to this movie—enough to make you forgive its shortcomings, if only for the 94-minute running time.

And, since it appears that everyone is chipping in their Dr. Seuss-emulating rhymes as reviews or commentary, here’s my attempt:

Thus was slung this smear-lofferous slop

ere the cantankers knew when to stop.

Just shut up, turn off Fox, drive to the nearest damn multiplex, buy a ticket, get some buttered popcorn at the concession stand, maybe some Buncha Crunch for the small children, call dibs on some good seats that are not too close to or far away from the screen, sit down, silence your cell phone, make sure your kids aren’t hollering throughout the movie, and for-the-love-of-god just enjoy it…

The Lorax gets a wide release on Friday March 2. Click here for local showtimes and tickets.