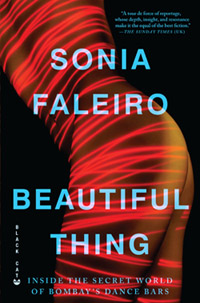 In 2005, journalist Sonia Faleiro began exploring Mumbai’s dance bars, a neon underworld of prostitution, drugs, and organized crime. Her aim was to document a subculture on the brink of disintegration. Citing moral misconduct, the city government was determined to shutter the bars and sweep the dancers underground. As this legal drama played out in court, Faleiro met 19-year-old Leela, a dancer with Bollywood beauty and a slumdog’s acid wit. After an abusive childhood, Leela had fled to Mumbai and found refuge in a hive of prostitutes, pimps, gangsters, and transsexuals. Eventually she landed at Night Lovers, a dance bar where girls, many barely teenagers, competed for men’s affection and money. Over the next five years, Faleiro shadowed Leela across Mumbai, a fractured city (formerly known as Bombay) where massive wealth abuts tin-roofed shantytowns, politicians promise reform while cops extort hush money, and virtue for women like Leela is synonymous with poverty. I recently sat down with Faleiro to discuss the mesmerizing journey chronicled in her new book, Beautiful Thing: Inside the Secret World of Bombay’s Dance Bars.

Mother Jones: For many Americans, the closest equivalent to a dance bar is a strip club, but there are important distinctions. How would you describe the differences?

MJ: What do men find alluring, given there’s no nudity and very little interaction?

SF: The expectation that you’ll see a woman who appears to be dancing only for you.

MJ: Does the average person in Mumbai know these places exist and the kind of illicit activities that happen inside?

SF: At one point there were about 1,500 dance bars in Bombay employing 75,000 women, as well as providing housing for stewards, waiters, and the men who drove the girls back and forth from work. So people were aware they existed. Dance bars were very much part of the image people had of Bombay.

The audience is generally an upwardly mobile group of urban professionals looking for a night out in the seamy side of Bombay. Having already had dinner at some posh restaurant, they think they’re doing something very adventurous. It’s primarily a male-dominated area, and while dance bars in general cater to men of a lower economic class, there are some that cater to businessmen, gangsters, and people with money.

MJ: The dance bars were more accessible than embedding with street prostitutes or brothel workers?

SF: I wrote about the dance bars because that entire world—the hierarchy, the secrecy, the glamour—fascinated me. I have written about brothel workers and floating sex workers and women on the street. I’ve done great interviews with all of them, but the dance bar is in a league of its own. The freedom the bars give women is not the same freedom a woman on the street or in a brothel has. That’s more like imprisonment.

To be in the dance bar you have to be young, good looking, able to dance, and comfortable talking to people. It’s about having an actor’s flair. A woman on the street is usually older, with a family, someone who wouldn’t fit in in terms of how she looks and behaves. And obviously, the brothel girls don’t have a chance of stepping out. The only overlap among these women is that some of the bar dancers have sex for money.

MJ: Several girls in the book describe sex work in terms of destiny. Is this attitude a reflection of India’s rigid caste system?

SF: When we say destiny, we often mean resignation. I think the girls are resigned to bad luck and terrible experiences and to being pushed into sex work as opposed to hoping things would change.

MJ: Yet they still feel free?

SF: Absolutely. Considering the environment they come from, being in a dance bar is an enormous step up. You have to see the dance bar from their point of view, as a source of liberation. Leela and a lot of the girls had sex with customers, but they did it on their own terms, which is very different from being forced into prostitution because you’re starving. 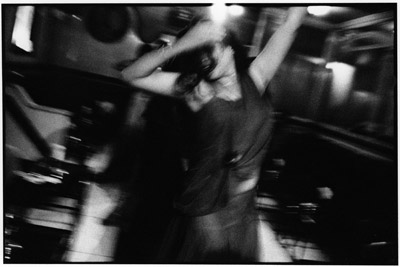 “A place where women have everything as long as they can dance”: Inside a Mumbai dance bar Srinivas Kuruganti

MJ: Leela attracted you because she was smart, funny, and articulate. Is she representative of the dance girls overall?

SF: Suffering abuse at the hands of men, being prostituted by a family member, entering into unsavory relationships, being a spendthrift, not planning for the future, those were characteristics she shared with a lot of bar dancers. The reason she stood out was because, despite everything that had happened, she was still an optimistic person. She was a joy to be around because of that.

MJ: You became quite close to her and witnessed a number of very private, sometimes harrowing scenes. Did the research ever feel intrusive?

SF: I don’t know how it could not. At the end of the day, it’s somebody else’s life and you are an intruder. You just have to remind yourself it’s something she agreed to and that you laid all the ground rules for, something that’s as comfortable as it can be. But you always feel like you shouldn’t be where you are.

MJ: Did you interact with the bar’s male clientele?

SF: I didn’t have many long conversations with Leela’s customers because she didn’t like that. Her attitude was, “You’re not going to learn anything from them. I’m the one with all the answers.” There’s also a sense that a dance bar is something illicit you can’t talk about openly, a place where men go to spend money and ogle women. In a fairly conservative place like Bombay, it’s not something a man likes to discuss. Most men say it’s their first time or they’ve just come for half an hour.

MJ: I was surprised to learn that self-mutilation, particularly cutting, is such an epidemic among the dancers.

SF: I remember the first time I saw that. This girl was sitting across from me and her arm looked like she was wearing bangles because it was cut all the way down, just very deep cuts. It was terrifying. I think bar girls cut for the same reason girls in other societies cut: from frustration. It’s a cry for help, but it’s particularly striking here because their industry is one where you present your body in as beautiful a way as you can. It was something that was taken for granted, however. Nobody presumed it would impact the money she made.

MJ: What does a dancer expect to earn in either tips or gifts?

SF: A lot of women live day to day, but many do earn a lot of money. I was a full-time reporter earning a decent living, but Leela made much more than I did. Hers wasn’t even a major bar, it was medium-sized, lower middle class, but it attracted a lot of men and there were 20 to 25 girls dancing. There are women who depend on the dance bar for their next meal, then there are those who earn enough to buy land, buy a house, and educate their relatives’ kids. Usually they stop working when they’re in their early 30s. By stop I mean they get pushed out, gently or rudely depending on their boss. These girls never really work for themselves; in the end, they work for their immediate family.

MJ: A lot of the girls, including Leela, are infatuated with Bollywood films. What is the connection between those stories and the girls’ inner fantasy lives?

SF: For a bar dancer, because she’s young and glamorous and spends a lot of money on makeup and clothes, the films are a source of aspiration in terms of perhaps one day being an extra or dancing in a musical number. Dance bars are seen as the place where gangsters go to relax and spend money. Since the gangsters are glamorized, by extension the women they sleep with are also necessarily glamorous. There’s one film about dance bars called Chandni Bar—chandni means moonlight—and it shows the dance bar for what it really is, which is a place where women have everything as long as they can dance.