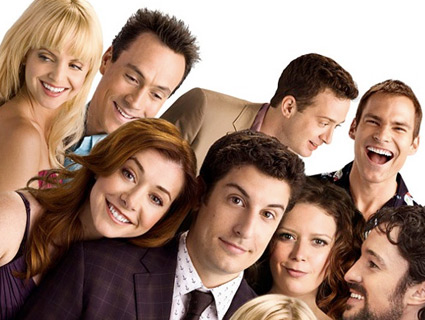 For better or worse, American Pie really did capture what it meant to be a teenager in late ’90s USA: The hormone-induced stupidity. The puppy love. The regrettable fads and styles. The lust and frustration. And who among us who went to high school in the Clinton years hasn’t buried his dick deep within the fresh, viscous center of a homemade pie?

But for all its raunch, the film still took a surprisingly tender approach to examining the vortex of travesty that defines the high school years. American Reunion, the latest installment in the Pie franchise, reminds you exactly why the original was such a hit. It strikes the right balance between romantic charm and vulgar charm, and the awkward moments and gross-out gags are calibrated with just enough creativity to bypass genre banalities.

That American Reunion is even enjoyable is astonishing simply because absolutely nobody was asking for another one of these movies. It’s been thirteen years since the first one arrived in theaters, and the series has for a long time been the victim of diminishing returns and bad ideas. 2001’s underrated American Pie 2 was a worthy follow-up, but 2003’s American Wedding almost tanked the whole franchise with its 96 minutes of soulless anti-fun. Also, there are far too many straight-to-DVD entries out there watering down the brand.

Though American Reunion is unavoidably (and thankfully) a breeze down nostalgia lane, the movie starts by illustrating the obvious: The gang’s high school days are long dead, and everyone’s getting cowed into early-30s adulthood. For instance, Jim (Jason Biggs, reprising his starring role with ease) is a bored ad man, and his wife and high-school prom date Michelle (Alyson Hannigan), once a predatory flute-screwing nympho, is now a settled-down suburban mom. The rest of the bunch—Kevin (Thomas Ian Nicholas), Oz (Chris Klein), and Finch (Eddie Kaye Thomas)—are married and/or busy selling out to The Man. Except for the lecherous, ever-pranking Stifler (Seann William Scott), who’s still trying to nail down the formula for reliving his teenage glory days.

Lucky for Stifler, they’re all descending on East Great Falls, Michigan for their 13th high school reunion, to fall back into a familiar pattern of lechery, pranking, and blacked-out hijinks. Writing/directing duo Jon Hurwitz and Hayden Schlossberg, veterans of the Harold and Kumar trilogy, fully commit to the pandemonium. When Stifler wreaks vengeance on a group of mean jocks by taking a sludgy dump in their beer cooler, the resulting mayhem is a staggering improvement over, for example, watching Stifler gobble dog shit in Wedding. When Jim’s dad (the incomparable Eugene Levy) starts doling out unsolicited advice on lovemaking, the cringe-worthy humor is a welcome return to form, rather than a disposable retread. And when the series’ trademark topic of “MILFs” resurfaces—courtesy of recurring supporting players John Cho and Justin Isfeld—the film dusts off an old joke and revives it with an unexpected jolt of energy. (Hint: a brand new MILF arrives on the scene.)

But with all the returning faces, the most memorable cast member is actually a newcomer: actress Ali Cobrin, who plays Kara, a fetching high school senior Jim used to babysit years ago—and a girl who’s recently graduated from jailbait to good ol’ fashioned adultery-bait. As Kara tries again and again to bed Jim, Cobrin dives into the role with a gonzo aplomb, combining drunken slurs, deceptive sweetness, and sustained full-frontal nudity into one deliciously miserable act of failed seduction and fantasy. Cobrin hasn’t been in much, but she’s definitely an actress worth keeping an eye on.

However, let me be perfectly clear, lest it sound like I have nothing but a gush of praise for this movie: There are several plot elements from the first two films that are clumsily revisited, particularly the past relationships of Oz and Heather (Mena Suvari), and Kevin and Vicky (Tara Reid). Some of stars—Reid, Klein, Nicholas—recite their lines as if they had just snapped out of a coma minutes before filming. And moveigoers unfamiliar with the franchise will no doubt have trouble giving a damn about the excess-sodden reunion.

Regardless, the camaradie and naughty playfulness make up the difference, and the movie skillfully taps into the collective desire to preserve our reckless, core immaturities as the years go by. Basically, you will exit the theater happier and rowdier than when you stepped in.

The closing moments of the film leave the door wide open for yet another sequel. The viewer is left to ponder, “Where could we possibly go from here?” American Divorce Proceedings? American Funeral? American Pie and Zombies?

American Reunion gets a wide release on Friday, April 6. The film is rated R for crude and sexual content throughout, nudity, language, brief drug use and teen drinking. Click here for local showtimes and tickets.