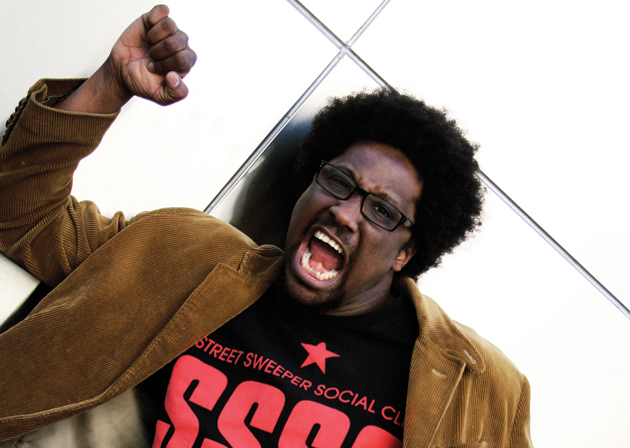 San Francisco comedian W. Kamau Bell remembers the night Chris Rock strutted in to his dressing room, unexpectedly, in the fall of 2010, to congratulate him on his act. For a comic still struggling to headline shows in San Francisco’s small stand-up scene, it felt like a dream, though Bell’s practical side kept him from reading anything into it. “I can’t go to these people and be like, ‘Make me famous,'” he says. So he buckled down and kept touring his solo act, The W. Kamau Bell Curve: Ending Racism in About an Hour. Based on what Bell calls “comedy investigative journalism,” the show hinged on the notion that racism is a persistent negative force that he could harness to make people laugh.

A couple of months later, Rock called Bell, offering to help him land his own TV show. They produced a pilot of Totally Biased with W. Kamau Bell, and FX bought a six-episode test run, which premieres on Thursday, August 9.

Bell describes Totally Biased as something like The Daily Show, but with considerably more attitude. It will involve comedians like Nato Green and Janine Brito, who tour with him as part of the stand-up troupe Laughter Against the Machine. Rock will be on standby as Bell’s mentor and the show’s executive producer. (Bell likens Rock to a “foul-mouthed yoda, because he always says things that are super helpful and filled with nuggets of genius, but they’re so dirty I can’t really quote them to my wife or my mom.”)

The open question is how the racially charged subject matter will go over with a TV audience. “When people would get uptight, a lot of times I’d just dig in more,” Bell explains of his stage act. “You pull back, I’m gonna go forward. The way to end oppression in general is to get the cool people on the right side.”

Update (12/3/12): Looks like the question isn’t so open after all: FX just announced it’s picking up 13 more episodes of “Totally Biased with W. Kamau Bell,” beginning January 17, 2013. Before that, you can catch Bell around the West and Midwest doing stand-up as a part of his “W. Kamau Mau Uprising” tour. Below, some standout clips from the first season of “Totally Biased.”

On the difference between Sikhs, sheiks, and geeks:

Mother Jones: When did you first realize that racism could be funny?

W. Kamau Bell: I think it was me feeling that it wasn’t fitting in with comedy is what made me write my solo show. There is a linear way in which black comedians are expected to talk about race by all audiences—black people are like this, white people are like this—and it really is hard to break through that. I never was doing it that way. I would have some good jokes, but then after 10 minutes audiences would be like, “Move on to another topic.” And I’d be like, “I’m not done yet!”

MJ: You’ve said your mom’s talk of racism and black pride made you uncomfortable as a kid.

WKB: My mom would insert herself in my schools and be like, “Is there any African American studies taught at this school? Nope, okay, I’m doing it,” and she’d just come in with her slides from Africa. I was like, “I don’t need this kind of attention.” It wasn’t actually until the movie Malcolm X, when I was a teenager, that black pride became newly popular again. Suddenly a lot of black people were wearing the fake kente cloth and red black and green and Bob Marley. That was sort of my window into finding my own identity as a black person.

MJ: I also understand you were pretty shy growing up. Do you still get nervous on stage?

“If I could email my jokes to the crowd and get the same immediate response, I’d do that. I was not the class clown.”

WKB: Oh yes. I think a lot of people get into stand-up to be the center of attention, which is perfectly legitimate. But I think I got in there to be heard. I used to say, if I could email my jokes to the crowd and get the same immediate response, I’d do that. I was not the class clown. I think the need to go on stage speaks to some sort of, like—I don’t think a profound psychological deficit, but something that happened when you were a kid. Or something your parents did.

MJ: But isn’t stand-up like the scariest type of performance a shy person could ever attempt?

WKB: You pretty much have to be bad at it for several years to get good at it, so there’s no avoiding embarrassing yourself.

MJ: What did you do before turning to comedy full time?

WKB: A lot of random retail jobs. I worked at a condom store, Ben and Jerry’s, Tower Records for a day, a video store—which was really a front for adult videos. I was the assistant manager of every job I ever had. When they wanted to make me manager, I would find a reason to quit, because I knew I would end up being the regional manager and suddenly, What happened? I was going to be a comedian!

WKB: I had heard through the comedy grapevine that Chris Rock had seen me online and had thought I was funny. I was like, “Oh, that’s good, but it doesn’t mean anything.”

MJ: Or so you thought.

WKB: After years of doing comedy, there’s lots of things you hear. If it leads anywhere, great. If it doesn’t, it’s just another person I know who doesn’t hate me.

MJ: So what happened?

WKB: I was in New York for a show. I walk backstage and my manager’s got this weird look on her face and right behind her is Chris Rock all dressed in black like he was in The Matrix, and he was like, “My name’s Chris.” Whoa! He stood there and talked to me for like 15 minutes, but it wasn’t like he was knighting me. He was just like, “Yeah, it was good, and I don’t like a lot of people.” Two months later, my phone rings, and he was like, “It’s Chris Rock.” And I’m like, “No, it’s not!” And he was like, “Don’t be the guy who thinks it’s not me when I call!” He doesn’t sound like Chris Rock on the phone—because he’s not screaming.

MJ: Tell me about your new show.

WKB: The best way to describe it is that it’s my version of The Daily Show—cause I’m further left than Jon Stewart is and have a stake in what happens. It’s always going to be clear what my opinions are. I will rarely come down on “Who knows who’s right?” I will be like, “This is who’s right, and this is who’s wrong,” the way Bill Maher does.

MJ: Why do you think Chris chose you?

WKB: He’s got a very hip-hop ethos: Dr. Dre discovered Eminem and 50 Cent. He said, “I want to help you get a show because unfamous black guys don’t get TV shows.”

MJ: Will racism still be a major theme?

WKB: I talked to Chris about that and he’s like, “You know, race is certainly part of what you talk about, but there’s no reason to stake your claim on that.” Even in my solo show, I talk about gay marriage, health care, other things. It’s probably 70 percent about race. It doesn’t do any good to just be on the side of black people. The funnier comedic position is to be on the side of oppressed people in general.

MJ: How are you thinking about writing differently for a TV audience?

WKB: I’m of the opinion that if you step on stage and you’re not a straight white male, you’re automatically making a political statement whether you know it or not.

MJ: You have a great routine about a lady at a gas station eying you and your light-skinned daughter with suspicion, as though you were stealing her.

“That’s the nature of my act: black man with a white baby.”

WKB: That’s the nature of my act: black man with a white baby—automatically it’s a combination that makes you go, “Hey, what’s that over there?”

MJ: Has that happened to you more than once?

WKB: My baby’s browning up. [Whips out iPhone.] The day she was born she was so white, but now she’s starting to look like me more.

MJ: So, regarding your comedy posse, Laughter Against the Machine: What’s the “machine”?