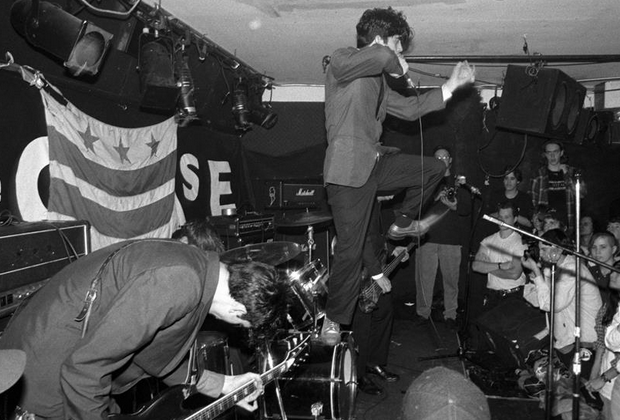 The Nations of Ulysses, way back when. By Don Lewis

At some book readings, authors serve gluten-free cookies and talk about their kids. Ian Svenonius, former frontman of the iconic DC-based bands The Nation of Ulysses and The Make-Up, channels the ghosts of dead rock stars. Here at Politics & Prose, an indie bookstore in the nation’s capital, he’s donned a Wiccan-esque robe that still doesn’t manage to contain his signature unruly black locks. Technically, Svenonius is here to talk about his new book, “Supernatural Strategies for Making a Rock ‘n’ Roll Group,” but I can’t remember attending a reading where the author held a séance and then told me to burn his book in an back alley bonfire after purchasing a copy. (Although one could imagine Chuck Palahniuk doing something like that.)

“This book creates everything one needs to create a rock and roll group,” Svenonius explains. “If you care about worker’s rights, you should work to suppress it.” He tells the crowd that he was inspired by a 1979 instructional manual for 7th graders interested in starting rock bands, which included useful information like, “Don’t stand in front of the PA.” Svenonius says that his book is an update that “doesn’t contain any useful information.”

So if you want to start your own mega-successful band, here’s some advice from Svenonius—which he claims came from his conversations with reincarnations of dead rockstars, or living musicians in an internet chat room. Don’t ask. 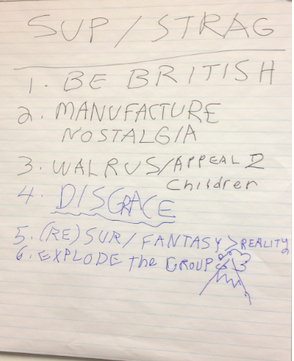 Channeling Paul McCartney: It certainly helps to be British…The American middle class, obsessed with the “brain gap” against the Soviets, shunned rock and roll as primitive gurgles, akin to smutty magazines… But when British groups—particularly the Beatles—reintroduced this filth to Americas as something which was exciting fun and fascinating, it created mass hysteria.

Channeling Little Richard: One should appeal to the sensibilities of the very young in order to avoid the cynical posturing of the teenage and adult years. The very young are like dogs on the street, when confronted by something that threatens them, they react by growling or crying. You can appeal to children by being a scary adult. Children are fascinated by horror, strange facial hair, grimacing, shouting, costumes, and dressing up like a walrus.

Channeling the Stones’ Brian Jones: The only way to make a solid, enduring myth is to create a moment or a thing which is frozen—the fly in amber effect… Death is the most surefire method of attaining a state of “perfection.” Faking one’s death is an obvious route, [or] one must explode the group at the apex of its career.

Channeling Jim Morrison: The most important thing is your record cover. This object is what gives records their aura of meaning, and because they seem meaningful, groups became meaningful. After the Internet was devised by the military industrial complex to destroy this phenomenon, groups have been robbed of their identity and reduced to a few squeals leaking from an iPod.

Channeling Willie Mae Thornton (who first recorded “Hound Dog” back in 1952): In a country alientated from national feeling such as the USA, where individualist, capitalist ideology strongly dissuades identification with the group and instead encourages sociopathic selfishness…subcultural bonding is a radical act. Without rock ‘n’ roll, it is virtually impossible.

Finally, if you’re wondering, as one audience member did, whether Svenonius would have done anything different with his own bands after writing this book (he’s currently involved with a band called Chain and the Gang), he gives a cryptic answer: “Oh God, no. No, I mean because—yes, I don’t. Yeah, but you know, it’s just one of those things.”