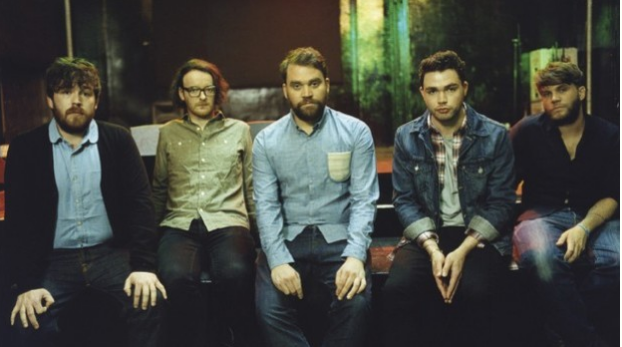 When I arrive at the 9:30 club in Washington, DC, where the Scottish indie rock band Frightened Rabbit is setting up for a sold-out show, frontman Scott Hutchison and his brother, drummer Grant Hutchison, are Skyping with their mom. They have been on a cross-country tour since early March and they haven’t shaved, but they’re still managing to be cheerful, dutiful sons. “On my day off, though, I like to get a prostitute and have some coke,” Grant jokes after they get off the call. “Actually we’re very boring; we like to read and go the cinema,” Scott adds. “We’re on a bus so often, it’s nice to just lie in a bed, spread out, and rolllll“ (which might explain their bed-head, not to be confused with the “we spent two hours making our hair look fashionably disheveled” kind.)

Frightened Rabbit—that’s what Mrs. Hutchison used to call Scott, because he didn’t like playing with other kids—is known for writing beautiful, aggressively bleak songs, often plotted around Scott’s most-recent breakup. “Poke,” from the 2008 record Midnight Organ Fight, includes such uplifting lyrics as “why won’t our love keel over as it chokes on a bone?…Or should we kick its cunt in and watch as it dies from bleeding?” (The c-word is used pretty commonly in Scotland.) State Hospital, the band’s 2012 EP, has a track that tells the story of a man sitting alone in his apartment on Boxing Day, clad in boxers, drinking like a fish, and staring at the phone: “I can’t call you all mine anymore, I can’t call you, full stop. But you know you can call me up anytime, call me whatever the fuck you want.”

It’s not the kind of thing you’re likely to hear from Frightened Rabbit’s musical nemesis. “I don’t want to be Mumford & Sons. Not in a fucking—ah, I won’t start that again,” Scott says. Still, the lazy comparison with Mumford continues to surface in the media, largely because Frightened Rabbit is starting to garner the kind of fame that comes from getting signed with Atlantic Records, having a fancy tour bus, and playing big venues like Terminal 5 in New York.

We were “flying by the seat of our pants” and opening shows at “venues that were probably too big for us.”

When Frightened Rabbit convened in 2003, it was just the brothers: “kind of like a White Stripes thing—it was fun, but didn’t sound great,” Grant says. At the time, Scottish indie rock was largely characterized by what he calls, “soulless, stylish art-school bands” like Franz Ferdinand. He says Frightened Rabbit, and bands like the Twilight Sad and We Were Promised Jetpacks, were a reaction to that movement. “It was us against the haircuts,” Scott says. “We don’t have style, so we thought we’d go for heart.”

They asked bassist Billy Kennedy to join (the current lineup also includes Andy Monaghan and Gordon Skene), and they started hopping on tours, “flying by the seat of our pants” and opening shows at “venues that were probably too big for us,” Scott says. “It’s important to serve your time, sharing hotel rooms, sleeping on the floor of the van.” The brothers agree that, even now, they are uninterested in playing giant stadiums, and prefer instead to play multiple nights at smaller venues, so the connection with the audience doesn’t get lost. “They’re as big a part of the gig as we are,” Scott says.

The writing process for the band’s latest album Pedestrian Verse, released to acclaim in February and which took about two years to complete, is unlike anything the band has done in the past: Instead of Scott going off in total solitude and coming out with near-complete songs, the band worked at a rehearsal space outside of Edinburgh, allowing the rest of the band to contribute. Additionally, unlike Frightened Rabbit’s past albums, which evoke bands like The National, TV on the Radio, and Wilco (all of which Scott loves), Scott says the new album was about “serving what the songs needed, rather than what bands I felt we should sound like.” He sits back and scratches his head. “Wow, I guess that’s the revelation of today.”

“Scott doesn’t talk about the things that are on the records. I’m his brother and he doesn’t even talk to me about it,”

When I return to catch the 9:30 early show, the previously empty venue is packed. The band opens with “Holy,” a big driving number that could easily be served at a massive outdoor venue—but soon segues into songs that demand a high-level of intimacy, such as “Good Arms vs. bad Arms” and “December Traditions,” which Scott announces is a “fucking hilarious song.” (It relates a relationship to cancer.) The crowd is really into the set—they know all the lyrics, and when Scott does a few solo acoustic tunes, the boozed-up fans quiet down to listen as raptly as cultists before their leader.

It’s undeniable that the big appeal of a Frightened Rabbit show is watching Scott bleed out on stage, while the infallible band behind him makes everyone dance. “Scott doesn’t talk about the things that are on the records. I’m his brother and the closest person to him, and he doesn’t even talk to me about it,” Grant says. Scott tells me he’s loath to describe his song-writing process as therapy, but it allows him to take this “whole mess of something that’s gone wrong and make a neat little four-minute story about it.” He adds, “I do wish I could be like normal people, and just have a conversation. Instead, I end up broadcasting it to the public, which is really quite twisted, but it’s the only way I know how to deal with things.”