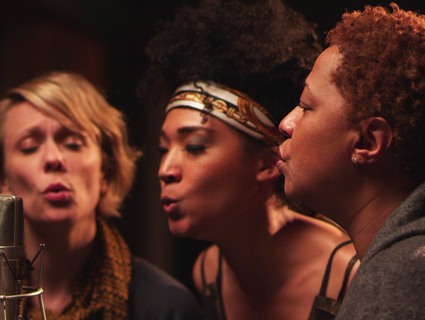 You hear their “oohs” and “aahs” on tons of popular songs, but for most of their careers they are back from the spotlight, their voices secondary to the famous ones captivating the crowd. In the new documentary 20 Feet From Stardom, a handful of backup singers finally get their chance to be seen as well as heard.

From the opening sequence, where the camera zooms in on them while their bandleaders are blocked out with blue dots, to the tightly framed close-ups on their faces singers, we get to know a group of women whose stories have never been told. Watch the trailer:

Director Morgan Neville, whom I spoke to recently in San Francisco along with singers Merry Clayton and Tata Vega, chronicles the ups and downs in the careers of singers like Darlene Love (member of the vocal trio the Blossoms and backup singer to Frank Sinatra); Lisa Fischer, who now tours with the Rolling Stones; and Clayton, one of Ray Charles’ background singers.

Producer Gil Friesen, who passed away in December, had his moment of inspiration while smoking a joint before a Leonard Cohen show. Thinking about Cohen’s backup singers, he grew curious about their stories and lives—who they were. After he teamed up with Neville and the two began talking to people, they quickly realized that no one really knew.

In the film, many of the singers speak of their deep love of music, melodies, and sound. “Singing is about sharing,” Fischer, the Stones’ backup, says. “It’s never a competition.”

“I just loved music is all,” adds Tata Vega, who backed up Stevie Wonder and is now singing with Elton John. “That’s all I wanted to do.”

Celebrities like Wonder, Sting, and Mick Jagger appear in the film and offer high praise for the voices behind their many hits. But while they value the sound, some question how much satisfaction can be derived from the profession. “Singing oohs and ahhs, that’s kind of fun for a minute, but I’m not sure I’d want to do it for a living,” Jagger says.

And while the women recall the joy they get out of performing, they also reflect on their own dreams of stardom. “Singing background was like a rehearsal,” says Merry Clayton, who in addition to her time as a “Raelette” was also that female voice on the Stones’ “Gimme Shelter.” Listen.

Clayton views herself as a diva (during our interview she kept her sunglasses on the whole time), but despite her talent and confidence, her solo career never gained traction. Darlene Love, a pioneer in the profession, even found herself working as a housekeeper at one point. Although she has sang on dozens of hits, she says a controlling producer kept her from launching into a lead role. As for Fischer, she released a Grammy-winning solo album, but let too much time lapse between her first and second record, and the momentum was lost.

“There is a springboard at the beginning,” says singer Judith Hill. “But it can easily become quicksand if that’s not what you want to do.” Her performance of “Heal the World” at Michael Jackson’s memorial service got Hill noticed, and she was a strong contender on NBC’s reality show “The Voice,” until she was eliminated a few weeks ago. Watch.

In our interview, singers Clayton and Vega reflected on how changes in the music industry have led to fewer opportunities. “People are calling each other, asking are you working?” said Vega. “It’s not like it used to be.”

“”I did have a hard time finding gigs because of the way I looked. Either I was too white, not white enough, too black, not black enough.”

Vega’s ethnicity has proved to be an additional hurdle. The film chronicles a shift in prevalence from white to black background singers, but Vega is multiracial, with family from Puerto Rico and the Dominican Republic. She says producers often haven’t known where to put her. “I did have a hard time finding gigs because of the way I looked,” she said. “Either I was too white, not white enough, too black, not black enough.”

Objectification is another challenge. “There’s no doubt,” Neville told me, “a lot of the singers are hired because of what they look like,”

In the trailer, Jagger comments only on the appearance of Claudia Lennear, who sang backup for Ike and Tina Turner. “She was, like, the really hot one of the Ikettes. She was very hot. Very beautiful.” In the film, Lynn Maybry, who sang with the Talking Heads and others, mentions the dress code she was once given: “Make guys excite.”

Regardless of the obstacles, most of the women have managed to keep up with their singing. Love, now in her ’70s, has reunited with her Blossoms bandmates. The first compilation of Clayton’s work, The Best of Merry Clayton, will be released in July, and Lisa Fischer is performing with Sting in addition to her touring gig with the Stones. “Some people will do everything to be famous,” she says, “and other people will just sing.”

Here’s a clip of the stars of “20 Feet from Stardom” performing at Sundance. The film will have a wide release on June 28.