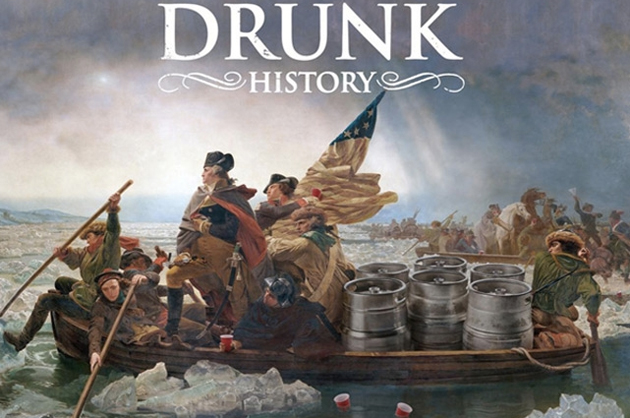 A People’s Drunk History of the United States.Comedy Central

“History is written by the victors—but told best by the shit-faced.”

So reads a title card in an episode of Drunk History, the incredibly funny new Comedy Central show adapted from the eponymous web series. The premise is simple: Comedians, writers, and barflies are fed copious amounts of booze and then asked to narrate key scenes from American history, as costumed actors such as Jack Black and Zooey Deschanel fill in with lip-synched reenactments. The TV version—whose eight-episode first season premieres Tuesday, July 9, at 10 p.m. on both coasts—includes comedian Bob Odenkirk as Richard Nixon. And one of the web episodes is a fantastic account of the friendship between Abraham Lincoln (Will Ferrell) and Frederick Douglass (Oscar-nominated actor Don Cheadle). Watch:

So can we trust these sodden accounts of our national heritage?

“All stories are 100 percent fact-checked in advance,” promises Derek Waters, the show’s creator, executive producer, and featured actor. Each narrator is given notes to ensure a loosely tethered historical accuracy. Once the person has internalized these morsels of the past, he or she is bartended to in excess, and then they’re off. “We let them say whatever they want, but we don’t want anything that’s wrong,” Waters continues. “After all, we’re learning history here.” Actually, the casual flubs provide some of the show’s most amusing moments. One soused narrator substitutes soul icon James Brown for abolitionist John Brown. And in the clip above, the narrator briefly misidentifies Frederick Douglass as actor Richard Dreyfuss, and Abe Lincoln as Bill Clinton.

The whole idea for Drunk History was born of—what else?—liberal alcohol consumption. Out on the town one night, Waters and his friend Jake Johnson (Nick on the Fox comedy New Girl) began riffing about the singer Otis Redding and the circumstances of his 1967 death in a plane crash. Johnson started drunkenly reciting an urban legend about how Redding knew he was going to die before he boarded his doomed flight.

“He kept insisting that Otis said to his girlfriend, ‘No, I’m serious, you take care of yourself!’ before he got on the plane, and I was thinking, ‘Oh, this is such bullshit,'” Waters recalls. “He was having so much trouble telling a story he truly believed was true, and I just started picturing this reenactment in which Otis Redding is staring at the camera being all like, ‘Shut the fuck up, this never happened.'”

The rest is history. Waters approached his friend Jeremy Konner, a Los Angeles-based filmmaker who had worked as an editor on Waters’ unsuccessful HBO pilot, to help him get the project off the ground. “Derek came to me and said, ‘I wanna film drunk people!'” says Konner, who signed on as director and co-creator. “I had done features and TV shows before, and all fell through. They were serious things. But Drunk History was the fun thing, the one where you said, ‘Fuck it, let’s have a good time!’—and this is the thing that succeeded.”

“We put a wig on Will Ferrell for a day, and we got an award for it,” Waters says. “That’s as high as I thought Drunk History would go.”

But Konner also sees something noble in Drunk History: It’s a platform, he says, to tell essential American stories that most of us never learned in school—like that of Mary Ellen Pleasant, the “mother of civil rights in California,” or Mary Dyer, a Quaker executed in Boston in the 17th century for flouting Puritan law. (Winona Ryder plays Dyer in a new episode.) “We’re always trying to push, for lack of a better term, the people’s history,” he says. “We want to find stories that have fallen by the wayside.”

The very first episode of Drunk History, in December 2007, featured the Aaron Burr-Alexander Hamilton duel and starred Johnson and Michael Cera, one of Waters’ closest friends. After it became a hit on YouTube, the series found a home on Will Ferrell and Adam McKay’s website Funny or Die. It aired briefly on HBO and the Lincoln/Douglass episode won the 2010 Sundance Film Festival Jury Prize for Best American Short Film. “We put a wig on Will Ferrell for a day, and we got an award for it,” Waters says. “That’s as high as I thought Drunk History would go.”

He was wrong. The new episodes, produced by Ferrell and McKay’s company, Gary Sanchez Productions, benefit from a bigger budget and a wider scope. Before, the creators used a MacBook to play the recorded narration to guide lip-synching actors; they now use a large PA system on an LA sound stage, meaning the scenes are recorded pretty much like music videos.

Another key difference is that the crew now travels to watering holes around the nation and gives random patrons the chance to narrate their favorite historical chapters. There were “a lot of tipsy people butchering American history,” remarks Miles Gray, who co-owns a location visited in the premiere, a bar in Washington, DC, called Smith Commons. (Other season one locations include Boston, Chicago, Atlanta, Detroit, San Francisco, Nashville, and San Antonio.) “The most difficult thing about interviewing pedestrians and people in bars,” Waters adds, “is that they might not know how to do a beginning, a middle, and an end. And we don’t want to make them feel like an animal in a cage.”

On Comedy Central’s watch, there is always a medic on-set in the event a narrator goes overboard on the sauce.

Yet even professional storytellers can be problematic when they’re wasted. The comedians narrating take four-to-five hours to record—often to the exasperation of the film crew. “Drunk people are not the easiest people to work with,” Konner says. “They’re not the most cooperative, either, and they forget things…But drunk people are hilarious.”

Although the crew remains cold sober as the narrator boozily garbles into oblivion, Waters will occasionally keep a glass in hand just to make things less awkward. “Come on, no one wants to feel like they’re the only person drinking when everyone’s staring at you,” Konner says. And on Comedy Central’s watch, there is always a medic on-set in case a narrator goes overboard on the sauce—some of the YouTube clips imply (or show) narrators puking their guts out in the name of comedy. “There are moments of concern, but never real moments of terror,” Konner says reassuringly.

If their new show is, ahem, a staggering success, Waters indicates that there may be room for expansion—and international editions, perhaps. “Hopefully,” he says, “another country will say, ‘Hey! What about us?'”

I’ll leave you with a clip from the upcoming Mary Dyer segment, starring Ryder and Cera. The narrator is comedian and actress Jen Kirkman: