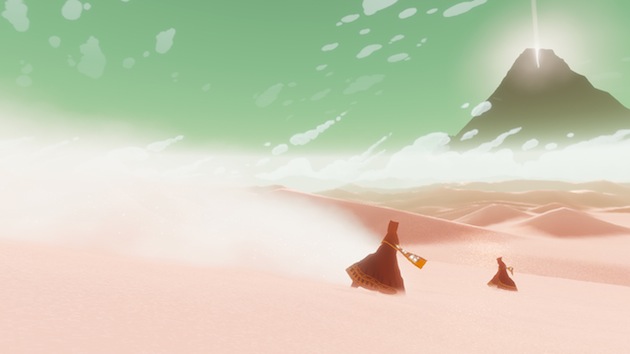 A bunch of us here at MoJo play games, love games, and cringe at the publicity that a few shoot em’ up games like Call of Duty receive every time another terrible mass shooting hits the news. Despite three decades of research, we’re still far from a definitive answer on whether violent video games are linked to IRL violence, as Erik Kain has noted here before. But like any art form—and yes, video games are art—there’s as broad a range of expression in games as the space between Kill Bill and Amelie and well beyond. Games can be emotionally moving, intellectually challenging, deeply political, and straight-up good quirky fun.

Here’s our buyers guide to perhaps lesser known but thoroughly excellent titles we think you might love and are almost entirely devoid of physical combat, whether fantastical or realistic. We figured you’ve already heard of the big sports titles like Madden and the FIFA series, music games like Guitar Hero, and movement games like Dance Dance Revolution or Wii Sports?; our list focuses on immersive narratives, physics-based games (think Angry Birds but way better), and “sandbox” games that let you build your own worlds.

Use the comments to yell at us about everything we missed.

If the last time you touched a game controller involved a spastic blue hedgehog, Portal is a great gateway into modern gaming. You’re an unwitting subject who’s just been mysteriously dropped into the test chambers of the Aperture Science Enrichment Center. You’re not exactly sure why you’re there, but a droll artificial intelligence being named GLaDOS informs you there’s cake at the end of all the lab trials if you make it through. It so happens that you possess a blaster gun that can open portals in walls, and soon enough you’re popping out of floors and zooming through ceilings, leaping and hurling yourself around the lab, timing jumps for maximum velocity. It’s mind-bending gameplay that works your puzzle-solving skills and memories of eighth-grade physics, so much so that the sequel, Portal 2, is popular with K-12 physics teachers as a teaching tool.

Frankly, this stunningly beautiful game feels impossible to describe. Take our word for it, or the fact that leading the Gawker gaming site Kotaku named Journey Game of the Year in 2012, it earned a profile from The New Yorker, and has even been likened to a “nondenominational religious experience.” The game itself is utterly devoid of dialogue: its characters never utter a single word. So let’s wrap this review up with just two: play it.

Ever wanted to build your own personal USS Starship Enterprise? A giant terrarium in the shape like R2D2? Landscape your own Westeros from Game of Thrones? The massively popular Minecraft was initially conceived as a straightforward game where players used the game’s Lego-like building blocks to build shelters from menacing creatures and so on. But even before the game made it out of its beta version, gamers began working together across multiplayer servers to construct ambitious and elaborate new lands and scenarios. You might build a digital replica of your house, down to the plumbing and light switches, and why not relocate the Arc de Triomph to your backyard while you’re at it? Slash your way through zombies and other creepy creatures if you so choose, but violence is mostly avoidable. In Minecraft, you create the world you want to live in.

Game scholarship (yes, that’s a thing) hasn’t decided whether this “poetic ghost story” is a bona-fide video game or an interactive film. The workaday gamer doesn’t care—this 90-minute game turned a profit just five and a half hours after being released. You’re a shipwrecked man wandering around a beautifully realized island, exploring cliffs, caves, and beach as a narrator reveals bits of letters that eventually coalesce into a haunting story. Some may find the gameplay constraining—our protagonist doesn’t fight anyone or solve puzzles to advance. “Stripped down to its constituent parts, there’s very little game here at all,” PC Gamer’s Chris Thursten writes. “But at the same time, it’s a story that only games give us the freedom to hear.”

Available on Windows and Mac computers $9.99

Animal Crossing moves you into a town populated by anthropomorphic raccoons, penguins, and goats, and simply lets you live your new fauna-fabulous life. Make friends with the hippo next door, stitch yourself a new animal-print wardrobe, hang out with a guitar-playing dog named K.K. Slider—it’s all up to you. While the game observes the changing of the seasons and the passing of time, its world is constantly changing, from the species of fish you can catch in its rivers to the goods available in village shops, with plenty of hidden surprises (including classic Nintendo games) to find. Critics have praised the simplicity and addictiveness of the game, even the parts that are essentially chores. “Some of the things you can do in Animal Crossing wouldn’t be considered fun at all were they to take place in real life,” IGN’s Peer Schneider wrote. “But that’s the beauty of the game.”

Like Minecraft, LittleBigPlanet is all about creating and sharing your own worlds. You’re a cheery little yarn-knit sackperson attempting to make your way across stylized levels inspired by locations like New York City streetscapes or the African savannah. Get though, and you can fire up the game’s DIY universe-building kit and build new stages and games to your heart’s desire. Fans have built everything from a bunny-themed version of Super Mario to a nearly hourlong feature film. You can buy and download extra themes like Toy Story, The Muppets, and Marvel Comics from developer Media Molecule. “Like the most prolific creators in the series’ community,” Gamespot reviewer Justin Calvert said about the most recent PS3 edition, it’s “a game that just keeps on giving.”

In a mood for a good scare, but don’t care for blood and guts? Slender shares its fear factor with the Blair Witch Project: the scariest monster is the one you can’t see. You play from the first-person perspective of a regular person lost in the woods at night. You traipse around with only a flashlight in hand, doing your best to avoid the Slender Man, an loomingly tall, faceless figure who might have crawled out of the deepest recesses of your nightmare. This character was spawned from a real Internet meme in which people Photoshopped a tall man in black into the backgrounds of otherwise unremarkable photos, a sort of creeper photobomb writ large. Among the game’s many deliciously eerie elements: there’s no music. You hear only the sound of own footfalls snapping twigs, the occasional cricket, your flashlight clicking on and off, and a pulsing, ominous beat that grows louder every time you find one of eight mysterious notebook pages scattered around the woods. This is one to play with headphones on and lights off.

You are 18-year-old Katie Greenbriar,  just returned home from a long trip to Europe. Your family moved homes while you were gone, and you show up at the new address for the first time late one thunderstorm-soaked night only to find your family has disappeared. You slowly piece together what happened to your parents and lovestruck little sister Sam as you search the house, combing for clues in the magazines, ticket stubs, and letters they left behind. What you find is knowingly realistic (the food items in the fridge have ingredients on the back), funny (check your dad’s box of magazines at your own peril), and eventually extremely poignant. The game is heavy on ’90s nostalgia, with a soundtrack by riot grrrl-era favorites Bratmobile and Heavens to Betsy. With its deeply realized coming-of-age storyline and themes of gender identity and sexuality, this indie game proves you don’t need big bucks to tell a great story. “Even though they weren’t mine, it still evoked the memories of my own time as a teenage riot grrrl with a secret love,” wrote one fan. “That’s something I thought I would never get back.”

The King of the Cosmos got loose one night and knocked all the stars and planets out of the sky. Your job, as the star prince, is to clean up the mess and replace the missing celestial bodies with whatever you can. First stop: Earth. Using a magical sticky ball that rolls up anything in its path, you travel around picking up smaller and then larger and larger objects, from ants to thumbtacks to cities and mountains, lumping them all into a big ball that will be thrown back into the sky. The title loosely translates from the Japanese to “clump spirit,” resulting in one wonderfully weird, quirky, and oddly joyful game.

Another brain-stretcher, this game allows you to rewind time and redo actions, even if your character dies. With some art nods to old school Nintendo games, Wired described its aesthetics as if “Mario’s art director had been Van Gogh.”  But don’t let the dreamy palette and the tranquil music lull you, you’ll be facing difficult challenges and must collect pieces of different puzzles that will eventually explain the main character’s affecting backstory and motivations. This strange and beautiful game will leave you feeling both challenged and haunted.