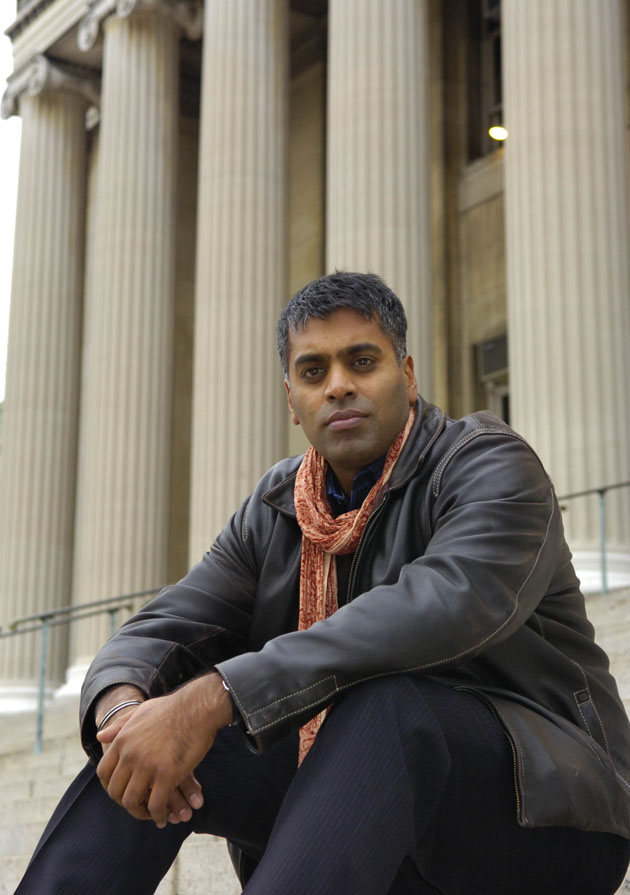 You may remember Sudhir Venkatesh from Freakonomics as the “rogue sociologist” who cozied up to a Chicago drug gang to analyze its social and economic structure—fodder for his 2008 bestseller, Gang Leader for a Day. For his new book, Floating City, Venkatesh, now a professor at Columbia University, spent years following off-the-books workers in New York City, most notably an upper-middle-class madam and an ambitious crack dealer.

As his subjects evolve (or fail to), we get a refreshing glimpse of how they view themselves: as businesspeople trying to improve their craft and grow their clientele. Venkatesh weaves his own story—a new faculty member trying to fit in at an elite university amid marital strife—into the narrative, and readers get to follow him around as he goes about his research.

Mother Jones: In Gang Leader for a Day, you befriend a Chicago drug gang in order to analyze its social and economic structure. In Floating City, your new book, you explore the illegal underground economies of New York City. What was your intention?

Sudhir Venkatesh: We’ve been so enamored with our global cities, and we tend to focus on wealth and sometimes will forget the fact that 99 percent of the population in these cities has a much different experience. So I wanted to uncover that, and more and more I found that in my attempt to do that I had to take the underground economy more seriously. Not only the sex and drugs, which are two economies that are featured prominently here, but also people who are working off the books.

MJ: You wound up profiling people who work illegally, including a madam from a rich family—whom it turned out you knew previously.

SV: I had come in with the classic stereotypes. And those stereotypes are in the academic research as well. But when I went out to find those people, I saw something totally different: white, middle-upper class women coming to New York and dating, sometimes sleeping with people on the side but not making much more money, not necessarily wanting to support a drug habit, not necessarily wanting to leave the trade but looking at it as something that was a legitimate income source for them and something that was helping them become part of New York.

MJ: How would you approach them?

SV: It’s very difficult if they don’t look at themselves [as prostitutes]. And that’s often what happened—I would use words and people would come back and say, “Sorry I don’t see myself like that, I don’t want to participate in your research.”

I discovered more and more people, whether they’re making films illegally with cash or they’re an escort, they think about themselves as craftspeople, they think about themselves as having a skill and a passion and the underground economy is having a place to go where they can live out their dreams. They might be completely blind—we have a right to say that—but they also have a right to feel what they feel, which is that they’re following their passion.

MJ: The dominant narrative is that as the rich become richer, the poor are being driven out of cities, and suburban poverty is on the rise. But clearly there are still people of all walks of life in the big cities.

SV: There’s an inability for them to be entrepreneurial. It’s very difficult to walk into a bank and say, “I’ve been doing this very creative, ingenious scheme. Unfortunately it’s illegal, but will you give me a loan anyway?” They remain excluded, so even while the underground economy is useful to the mainstream economy, individuals can’t necessarily translate the human capital that they’ve amassed working off-the-books into a legitimate career.

MJ: Aren’t some other countries trying to do exactly that, to make certain underground economies legit?

SV: In Latin America, in Africa, in parts of Southeast Asia, partly because of the scale of the workforce working off-the-books and partly because of the historic ineffectiveness of government in spurring business growth, the underground economy has just played a much more central role. In India even Grameen Bank, which is the formal program, was built on an informal credit scheme that had existed among Bangladeshi people for a long time.

MJ: In the book, you tail a crack dealer, Shine, as he tries to bring his product across class lines and into a more “upscale” market.

SV: Shine is someone who is trying to break out of a mold. As a Harlem-based drug trafficker, Shine should not have been trying to make this change. You don’t find that in these academic studies. And then you start to wonder, do you not hear about the Shines of the world in academic studies because he doesn’t exist? Or because our academic lens shuts them out?

MJ: In the book you find yourself relating to Shine when he tries to start selling his product in art galleries.

SV: I came from Southern California into the Ivy League, so I really resonated with people that I saw in New York who were coming and trying to climb up a mountain—as it so happens, a crack dealer who was trying to figure out, “How do I get into art galleries in SoHo and sell it to the rich?”

MS: Last fall, the New York Times article ran an article questioning whether you had misused $200,000 in university funds. Was that true?

SV: I was helping to put an institute in place and make sure that it worked well, and it [the financial disclosures] was just part of my background process of moving to Washington [to do some government consulting]. I didn’t receive any funds. I didn’t embezzle anything. I was shocked when the article came out. I was shocked that somebody would release these very partial and misleading documents. I was never accused of doing that. I have a wonderful relationship with the university.

MJ: You’ve also received some professional criticism from your peers—that some of your methodology, particularly your closeness to your subjects, isn’t academically appropriate.

“When people are doing illegal things. They feel a sense of shame and a sense of wanting to unburden themselves.”

SV: Sociology began with this embedded approach. When the discipline started to change and it became more scientific, that kind of approach was thought of in a number of ways. One, it was thought of as biased. So those feelings are very much at the core of sociological prejudice against that work.

MJ: In both of your books, you do have a code of sorts—I don’t know whether it’s academic or personal—for interactions with your subjects.

SV: For research, there’s absolutely a fixed set of rules. But there are things that happen along the way because you’re involved or you’re open. A group of johns wanted me to observe them and follow them, and I didn’t want to do it, and I didn’t. But there’s no rule that people can’t call upon you and ask to be in your research study. That’s what happens when people are doing illegal things. They feel a sense of shame and a sense of wanting to unburden themselves. You end up being a source of emotional comfort, and those are the harder areas to navigate.