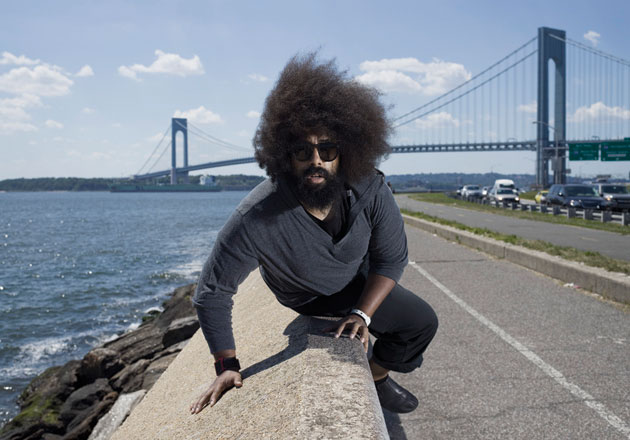 WATCHING REGGIE WATTS do his improvised music and comedy thing, you’ve got to wonder what’s going on in there. One minute he’s laying down a beatbox track on his loop machine, adding vocals from whomping bass to high falsetto, and capping it with absurd lyrics (“Nobody needs a whole croissant!”) composed on the spot. The next he’s speaking in made-up tongues or expounding on metaphysics—and you’re laughing. Watts, 42, has put out four albums, toured with Conan, tickled techie crowds at TED, and costars with Scott Aukerman on the new season of IFC’s Comedy Bang! Bang! kicking off this week. He’s also a cofounder of the YouTube channel Jash, along with the likes of actor Michael Cera and comedian Sarah Silverman.

A Montana-raised Brooklynite by way of Seattle, Watt has come a long way since his band, Maktub, rocked small venues during the grunge era. It seems success hasn’t gone to his head—though with all that hair, who could tell? I caught Watts on his mobile phone as he walked the Brooklyn streets. But before we continue, here’s a taste:

Mother Jones: You were alone a good deal as a kid. How much did boredom factor into your creativity?

Reggie Watts: A healthy amount. I was an only child, so I had a lot of time to fuck around on my own. But I usually occupied my time pretty well.

MJ: When did you start beatboxing?

RW: When the Fat Boys came out, that was the first time I heard beatboxing. It was me in a bedroom, pressing play on a tape recorder and trying to do what they’re doing.

MJ: What were some of the other influential albums for you growing up?

MJ: Tell me about your earliest performances.

MJ: And later, in high school?

RW: That was competitive dramatics. We would travel around to different cities. People would pick a scene and get judged on that. It was pretty clinical. Fully improvised. Really awesome.

MJ: Tell me about your 2011 gig in Saudi Arabia with the Lebanese comic Nemr Abou Nassar.

RW: It was a trip! There was a young woman who did stand-up with us. She went by McShortie and she’s considered Saudi Arabia’s first female stand-up comedian. We had to do it on private property on a golf course because the cultural police can [harass] people for intermingling with Westerners, and being at a coed event is illegal. Once we got them out of the picture, we could swear, we could be overtly sexual. It was awesome.

MJ: Even for American crowds, you’re pretty out-there. Do you worry about taking things too far?

RW: Not ever. I think about the audience. I just want to make sure they’re having a good time. I don’t want them to think that I’m just going off and not giving a fuck about them. [Laughs.] So there’s that.

RW: I like smaller gigs with a good sound system. The gigs I don’t like are usually the gigantic stadium size—not that I do that very often. But a really huge crowd is not as fun. Anytime it gets over 500 people, it’s a challenge to connect with people. Ultimately, it’s really my fault. I have to make it work.

MJ: And what do you do when it’s not working?

RW: If something goes wrong with the equipment or if I’m just not feeling it, I just kinda change up the script and make sure that I don’t start focusing on that feeling, otherwise the shit can sink really, really quickly.

MJ: Do you still encounter crowds who don’t understand what they’re in for?

RW: I always hope there’s a good percentage of that, because that’s part of the fun: getting people to be a little bit confused.

MJ: Speaking of which, you told Vice that you slip into an English accent whenever you’re around English people.

“Fortunately, what I do is weird enough that I still hang out with a lot of my friends who are struggling.”

MJ: You do this with total strangers?

RW: Of course! When I travel, sometimes I just speak in an English accent!

MJ: So has your success kind of estranged you from the underground performance scene?

RW: Not really. Fortunately, what I do is weird enough that I still hang out with a lot of my friends who are struggling. I try to work with artists who are still on that level, which means a lot of performance artists and things like that. If all this went away, I’d want to still be a part of that community. [Walks past a Dunkin’ Donuts franchise.] Bullshit! Dunkin’ Donuts bullshit! It’s like the shittiest restaurant in the world. Just makes me mad. Anyways… [Laughs.]

MJ: Compared with some in your line of work, you seem unusually comfortable in your own skin. Has that always been the case?

RW: It’s something I had to become more comfortable with.

MJ: So your stage presence is an acquired trait?

RW: I would say so. I mean, there has to be a kernel of something natural there. But then there’s a desire to get better at it.

MJ: Let’s talk music. The harmonies on your song “Why Shit So Crazy” give me chills, and the live performances you did with LCD Soundsystem were amazing. Can we expect a Reggie Watts album that’s more music than comedy?

RW: Definitely. I’m actually releasing two music videos—there’s nothing funny about them at all. The videos are weird, but the songs are pretty much straight up. And “Information,” the song I performed on Conan, is completely serious.

RW: [Comedian] Kate Berlant is really going into some interesting territory, and Rory Scovel is killing it. They’re kind of my go-tos in the last few years.

MJ: You also worked with Louis CK on the soundtrack for his sitcom, Louie. Tell me about that.

RW: He’s a cool guy—one of the geniuses of our time when it comes to stand-up. Knows what he wants and is very articulate about it. He has really good music tastes. It’s good to be around that energy.

MJ: You’ve talked in the past about using imagination as a vehicle for change. What did you mean by that?

RW: Everyone has that freedom of being able to shift perspective. I hope in my performances that people see that you can reinterpret the world any way you want to. So I just go up and do my thing, and hopefully people are like, “Oh! Yeah!”