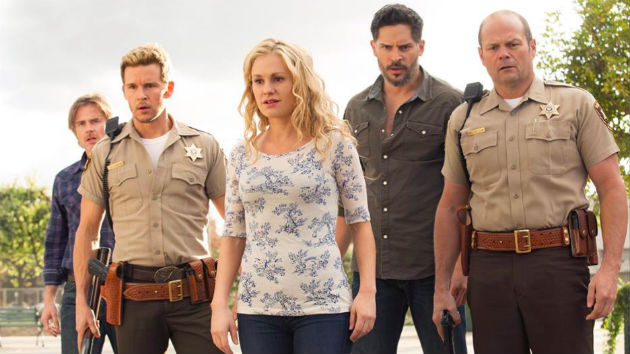 “How progressive of him.”

That was one of the first sentences that Bill Compton (played by Stephen Moyer), a nearly two-century-old vampire, ever uttered to his one true love Sookie Stackhouse (Anna Paquin) in the HBO series True Blood. The two were briefly discussing her friend, Sam Merlotte (Sam Trammell), and his support for the Vampire Rights Amendment (VRA), which would endow vampires with the same Constitutional rights identical as other Americans:

This was the first conversation, political or otherwise, that Sookie and Bill ever had. This exchange is from the pilot episode, which aired in late 2008, and it was an early hint that the True Blood crew would regularly inject political notes into their blood-and-sex vamp saga, to the point that each season can arguably be read as its own political allegory. With the seventh and final season premiering on Sunday, here’s a look back at some of the show’s political greatest hits:

1. The whole thing is really about gay rights and civil rights:

In the True Blood universe, vampires are—along with being sexy and dangerous—an oppressed minority. The struggle of mainstream, generally peaceful vampires to gain acceptance in American society is routinely paralleled with the fight for gay rights and marriage equality. Here’s a shot from the opening credit sequence that shows a “God Hates Fangs” sign—drop the “N” and it’s an obvious reference to the Westboro Baptist Church‘s infamous placards:

In 2010, GLAAD declared True Blood the most gay-friendly series on TV: “Thanks to its large cast (and often sexually ambiguous vampires), HBO’s True Blood is the most inclusive program currently on television, featuring six regular and recurring LGBT characters,” according to organization’s 2010-2011 “Where We Are on TV” report.

Season five features an insurgent group of fundamentalist vampires called the Sanguinistas, who are itching to instigate a civil war within the global bloodsucker community. According to True Blood creator Alan Ball, this violent, theocratic vampire movement was inspired by none other than failed 2012 Republican presidential candidates Michele Bachmann and Rick Santorum.

Here’s Ball, talking to TheWrap about how he mapped out the season, and how the two politicians inspired his vision of vampire terrorism:

For me the jumping off point was watching the Republican primaries, watching Michele Bachmann, Rick Santorum, and asking what would it be like to have a theocracy in America—which is way more terrifying than any fictional monster could ever be…What’s terrifying is how many people agree with [Santorum].

“A lot of right-wingers would like to see a theocracy in America,” Ball said in an interview with Entertainment Weekly.

3. “The Obamas” are an anti-vamp death squad:

The fifth season also introduced the Obamas, a gun-fetishizing, anti-supernatural band of thugs. As they roam around killing vampires and other supernatural beings, they hide their faces behind Barack Obama masks: 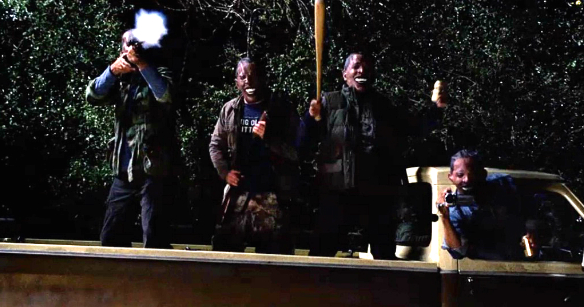 4. The final season appears to reference the devastation of Hurricane Katrina:

The new season finds Sookie’s hometown of Bon Temps, Louisiana, at the center of a new war between humans and a band of infected, extra-ravenous vampires. Some the town’s residents take matters into their own hands, raiding the local police department’s cache of firearms. “We’re here for our guns that are a part of our Second Amendment right not to be fucked over by our government!” one of the spooked citizens says.

An investigation brings the Bon Temps cops to another community that has been slaughtered by the same group of roving vampires. They find this in the decimated town: 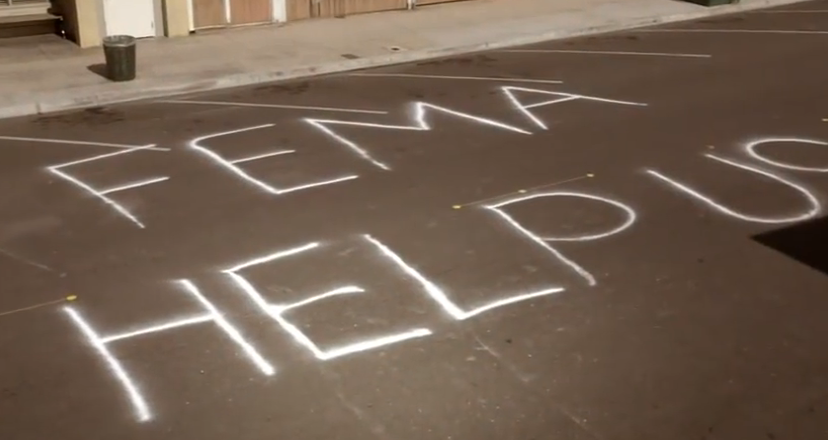 The federal government did not act to save these people, and failed to answer Bon Temps’ cries for help. This should remind you of something else that happened to Louisiana some years ago.

5. There’s a politically powerful church that drives the anti-vamp-rights agenda:

The Fellowship of the Sun is based outside of Dallas and aims to wage a holy war against all vampires. The church also cuts TV ads to counter pro-VRA forces in Congress. “Children see this lifestyle, and maybe they want to imitate it,” says a woman in the following political ad:

6. The Louisiana governor is pretty much a vampire-hating Hitler:

In the sixth season, Gov. Truman Burrell (Arliss Howard) oversees a major crackdown on the state’s vampire population. His policies—death camps, terrible medical experiments on vampires—take a cue from the Nazis. For the record, BuzzFeed’s Louis Peitzman raised a fair point about this last year: “Here’s the real problem with True Blood‘s civil rights allegory: In this case, the so-called bigots are right. Their discrimination of vampires is reasonable, because all of their fears about vampires are true.”

Anyway, here’s a clip of one of Burrell’s speeches, in which he announces the closure of vampire-owned businesses and encourages Louisianans to buy guns and ammo: