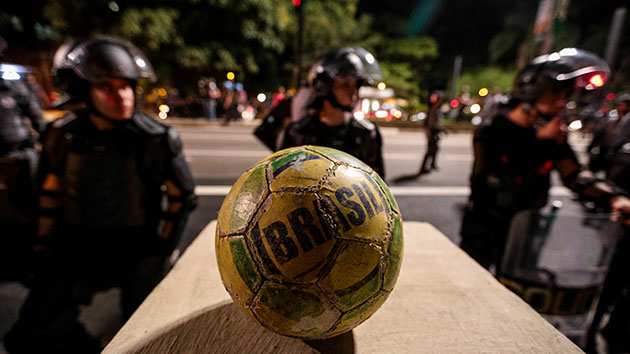 The most expensive World Cup ever has come and gone with a German victory and a Brazilian implosion. The hosts suffered an embarrassing two-game skid at the end of the tournament—losing by a combined 10-1 score in the semifinals and third-place game—leaving Seleção fans from Rio de Janeiro to Manaus longing for the days of jogo bonito.

But as Slate‘s Joshua Keating pointed out, they also might be ready for change at the top. During Brazil’s historic 7-1 loss to Germany on Tuesday, fans reportedly started an obscene anti-Dilma Rousseff chant; the president decided to stop attending games after enduring taunts in the national team’s opener against Croatia. Meanwhile, the government crackdown on Cup protests recommenced on Saturday, when some 17 people were arrested in advance of the final.

With all the tensions surrounding the World Cup and the upcoming 2016 Summer Olympics, I reached out to Juliana Barbassa, a former Rio-based Associated Press reporter. Barbassa is now finishing up a book about the upheaval in Brazilian society that led to last year’s national protests and today’s lingering violence. We talked about the country’s growing middle class, soccer’s effect on the national psyche, and the post-World Cup/pre-Olympics political dynamic:

Mother Jones: How did you come to this topic?

Juliana Barbassa: My whole family is from Brazil. I ended up in the US because of my father’s work, and ended up going to college and graduate school and becoming a journalist there. Then I had this chance to come here as the AP’s correspondent in Rio, and I started thinking about this. In 2009-10, Rio had just gotten the Olympics. It already had the hosting of the World Cup up its sleeve, and growth was tremendous. It seemed like Brazil and Rio were on everyone’s radar.

Having known Brazil and Rio in the ’80s and ’90s, post-transition-to-democracy when the economy was in the dumps—hyperinflation, Brazilians leaving Brazil for the first time—I had some real questions about whether what was happening now was addressing these inequalities that had hamstrung the country. So I wanted to spend time with the people who, because of their jobs or where they lived or who they are, were at the nexus of some particular aspect of this change.

“Yes, there are these Brazillionaires. But we’ve always had the hyperrich. It felt like the real shift was happening among the lower socioeconomic classes.”

JB: There’s a visible reduction in punch-in-the-gut poverty. People aren’t hungry in the same way that they were. This new middle-class thing is very real, and you see it in things like the number of adults wearing braces. It’s shocking. Also, the number of first-time Brazilian fliers—people who could never afford an air ticket. At the same time, part of what’s interesting is a sense of affluence that’s kind of based on stuff. Some of that’s access to food and basic needs, but also cellphones, credit cards, cars—all those things are selling like they never have before.

But you can have the stuff of the middle class and still lead a life that lacks a lot of the things that the middle class expect, like access to good education, decent transportation, sewage treatment, basic things like that. The rest of the services and rights and expectations haven’t been met yet.

MJ: What role did this group play in the protests we saw last year?

JB: The protests were very heterogeneous: people from all over, all walks of life, a lot of university-educated people, some of this new middle class. But these protests were sparked by a revolt over an increase in the bus fare of 10 cents American—a wealthy person isn’t going protest over that. The other demands they were making I see as generally very middle-class demands: A lot of the signs read things like “I want FIFA-quality schools,” “I want FIFA-quality hospitals,” “If my kid gets sick, I can’t take him to a stadium.”

And also the next step—a government that pays attention to the needs of the population and tries to meet them instead of putting on these big events that people were starting to feel maybe detract attention from the things that are really necessary, a government that’s less corrupt, these kinds of things. These are demands of a growing middle class that’s finding its voice.

MJ: Do people think of the World Cup and Olympics megaprojects as separate phenomena?

JB: I think most Brazilians have been thinking of them as one. Also, because of the way that projects have been hooked onto this event and that event, it isn’t necessarily clear. Here in Rio it doesn’t make sense. For one of the World Cup projects, one of the big deliverables was this transit route that was supposed to go from the airport to the far west. The far west is where we’re going to have a lot of the Olympic installation. There’s nothing related to the World Cup. So why is this rapid transit route part of the World Cup? Who knows. People didn’t really have a sense of what it would cost or what it would mean until we started to get close to the World Cup. I think it will be the same for the Olympics.

MJ: After all of the buildup, what was it like once the World Cup actually got here?

JB: Just before it started there was a lot of tension in the air. There was a poll that said the majority of Brazilians did not think that this was a positive thing for Brazil. There was a bit of grumpiness. There was basically like a holding back that is absolutely not the way that Brazil usually approaches the World Cup. So there were a lot of questions about how people would react when it started. What if Brazil loses? Will there be a big explosion of protests again? But there hasn’t.

I think a lot of people were really turned off by how violent these protests have been: violence by the police, which is heavily armed in these sort of Robocop outfits—full body armor, massive weapons, very ready with the pepper spray and stun grenades and things like that—and then these black blocs: people who use these violent tactics. I don’t think there is sense that it’s all forgotten and over. [President] Dilma Rousseff’s approval ratings are very low. I just don’t think that it’s manifesting as an anti-World Cup feeling. People are separating those things.

“Brazilians by and large love their soccer, love their national team, but they don’t feel like either of them represents them—or that everything depends on whether Brazil wins or loses.”

I feel like Brazilians used to identify with soccer. It was Brazil’s face abroad. Our national team, our biggest players, Pele and all that. There’s a Brazilian writer, Nelson Rodriguez, who was a real chronicler of soccer, who once said, “The national team was the nation in cleats.” It was that for a very long time. Ironically, now that the World Cup is here and the world is seeing Brazil and seeing the good and the bad, there is a little bit of a separation there. Brazilians by and large love their soccer, love their national team, but they don’t feel like either of them represents them—or that everything depends on whether Brazil wins or loses on the pitch.

MJ: Do you think the protests will return, and if so, will they be as large as last year? And what role will all of this play at the polls?

JB: It’s very unpredictable. Last year, nobody saw them coming. I do think people are more awake and aware about their rights and what’s owed to them. I don’t know if they’re unhappy enough to change it, but I do think that the country that we’ll have in 2016 is going to depend on how Brazilians process this change and how they see themselves, and the economic moment. We’re definitely post-boom. We haven’t grown since 2010. Jobs are still plentiful. Inflation is rising, but it’s not out of control. If those numbers start to change and people start to feel like they’re going to the supermarket and they can’t get as much as they used to—if it starts hitting people in the areas where it matters—I think that we might see more unrest.