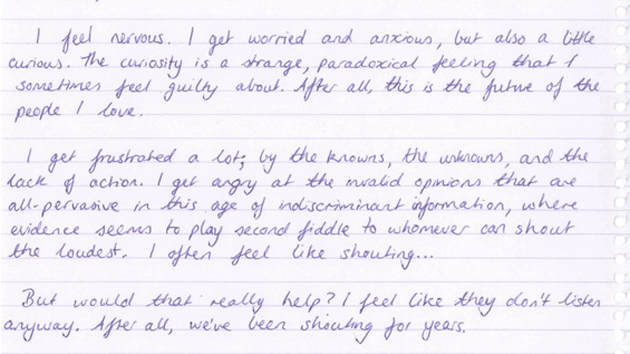 Such are some of the words that Australian climate scientists use to express their feelings about the dysfunctional climate debate (which, in Australia, has recently seen the repealing of a carbon tax, a chief objective of the current Liberal Party prime minister Tony Abbott). Their writings appear on a new website, entitled “Is This How You Feel?,” run by Joe Duggan, a master’s student in science communication at the Australian National University’s Centre for the Public Awareness of Science. Reached by email, Duggan explained that he “wanted to give scientists the chance to step away from the dry data and clinical prose that laypeople find so hard to engage with.”

Here are some particularly striking emotional expressions from the researchers, expressions that the climate “skeptic” blogger Anthony Watts has said make him want to “hurl”:

I feel a maelstrom of emotions.

Life would be so much simpler if climate change didn’t exist.

I am infuriated. Infuriated we are destroying our planet.

I often feel like shouting…But would that really help? I feel like they don’t listen anyway. After all, we’ve been shouting for years.

It makes me feel sick.

I feel betrayed by our leaders who show no leadership and who place ideology above evidence, willing to say anything to peddle their agendas.

We have so much to lose.

And, perhaps most memorable of all:

I see a group of people sitting in a boat, happily waving, taking pictures on the way, not knowing that this boat is floating right into a powerful and deadly waterfall.

You can read all of the letters here. People often allege that scientists can’t communicate, but as these letters show, that’s not really true.

When they’re actually speaking or writing in the language that they use with other scientists, then yes, scientists can seem incomprehensible. But when they’re speaking simply as people, freed up to express emotions, they share thoughts and feelings that we can all instantly understand.

“This is not the only way to communicate climate change, but it is one way,” says Duggan. “We need to kill apathy through death by a thousand cuts. Maybe this can be one cut.”