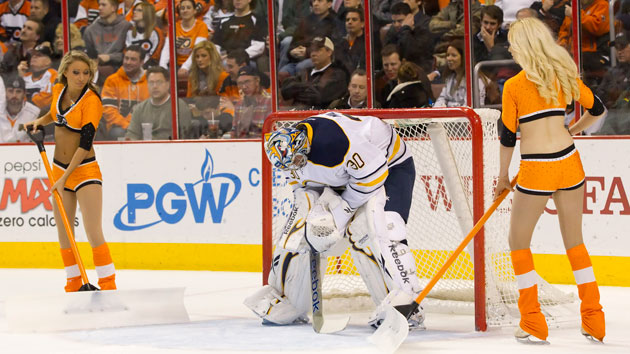 The NHL’s Philadelphia Flyers have been embroiled in controversy over the past few days—not because of anything hockey-related, but because of the team’s treatment of its ice girls, the women who clean the ice in crop tops and short shorts during stoppages in play. After the Flyers’ ice girls were replaced with “ice men” earlier this fall and fans booed relentlessly, the team announced Tuesday that the ice girls would be reinstated.

A little background: For years, several NHL teams have employed women who, in addition to shoveling ice, are responsible for things like greeting fans at the doors and leading cheers on the sidelines. Earlier this year, after writing an article about how five NFL cheerleading squads had sued their teams for labor violations (examples include having to pass a “jiggle test”—more on that here), I received an email from a former Flyers ice girl. “Speaking from personal experience,” she wrote, “ice girls are treated very similarly.” I went on to speak with three ice girls from the Flyers, and four from the Los Angeles Kings, who were then competing for the Stanley Cup.

Read more from MoJo about life as an ice girl.

The Flyers ice girls had mixed experiences overall but corroborated a few disturbing trends, which I wrote about in a June article. They were paid $50 per game, with their game-day duties lasting about seven hours. They got cold when greeting fans at the doors in skimpy uniforms, but were told that they couldn’t put jackets on. In 2012, when the Flyers hosted a three-day outdoor festival called the Winter Classic, they walked around in shorts, wearing two pairs of stockings, in 20-degree weather. They weren’t allowed to eat in public, despite the long hours and cold.

When I asked both Kings and Flyers ice girls why they continued to do the work, the response was unanimous: Despite the working conditions, there was something uniquely thrilling about being the center of attention on the ice, about being icons to a community of fans.

At the team’s first preseason game of the year, on September 22, the Flyers surprised fans with a change: The ice girls had been eliminated, and in their place, a team of men in bright orange jackets cleaned the ice. The team gave no reason for the change, and as the video below suggests, fans weren’t too happy about it.

In the meantime, I spoke with a couple of former ice girls about the team’s reactions. “The ones that actually wanted to try out weren’t too happy that there wasn’t going to be a team this year,” said one. “They thought it was unfair. I couldn’t care less. I don’t know why you’d want to go back to that abusive relationship.”

One veteran acknowledged that the issues from my June article were valid, and “sometimes it sucks that we have to stand outdoors in the cold.” But still, she had been thinking about trying out for the team again, and she was frustrated with herself and her teammates for having complained: “I’m sure you talked to some of the girls that do come back every year and they shot us all in the foot by expressing their unhappiness. I’m also guilty of that. Look where it got us.”

The Flyers maintained their radio silence until the third game, on Tuesday night. As fans started to boo the ice men, a sign appeared on the scoreboard announcing tryouts for—you guessed it—a new team of ice girls. Fans roared in approval.

On the ice team’s website, candidates are encouraged to submit a photo and résumé and come to auditions this Sunday with “professional-looking hair and make-up.” Applicants will be judged, among other things, on their ability to skate, turn, stop, do crossovers, and “push a wheel barrel on/off the ice surface”

Still, the response to the team’s announcement on Twitter wasn’t entirely enthusiastic. A sample of reactions:

@NHLFlyers so can we women complain enough to get the in-game personality to have a six-pack and walk around topless??? #WeWantEyeCandyToo

@NHLFlyers I’ve been a fan my whole life but this pisses me off. Think of your daughters and sisters. You’re enabling oppressive sexism.

Of course, the fans’ reactions, and the dozens of articles about the Flyers ice team, stem from bigger, messier questions: What should we make of ice girls and cheerleaders in 2014? What about the women who want to cheer? And what happens if those women also happen to have some complaints about the job?

Regardless, it seems that most reasonable folks would support simple changes, like paying ice girls more than $50 for seven hours of work, and maybe even letting them put layers on if they’re unbearably cold. But when I emailed Ike Richman, the VP of public relations for the team, to ask if the ice team’s working conditions or pay would change this year, he simply replied, “The organization has declined to answer any of your detailed questions. Thanks.”