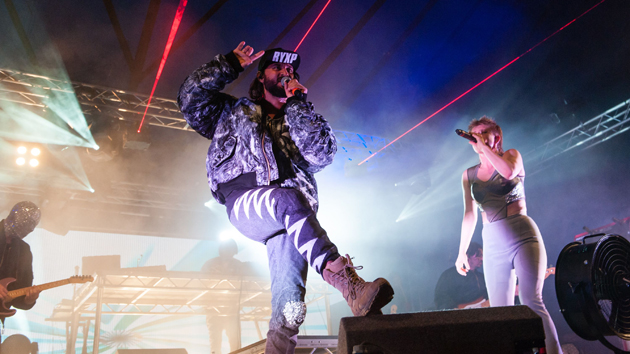 Svein Berge with Robyn at the UK's Latitude Festival.Richard Isaac/AP

Most bands don’t announce their final album in advance. That designation is typically applied post-facto, when once-harmonious bandmates descend into irreparable squabbles on the road. But Norwegian electronic duo Röyksopp has declared that its aptly named new LP, The Inevitable End, out this week, its last.

But Svein Berge and Torbjørn Brundtland aren’t disbanding. Instead, they simply plan to ditch the old long-play format. “We feel like this is a goodbye to the traditional album,” the duo wrote on their website.

I caught up with Berge and Brundtland alongside Swedish pop star Robyn, as the three toured to promote their collective EP, Do It Again. The three performers opened up about how they got together, how the internet has changed the game, and the joys of not being beholden to record executives.

Mother Jones: Your first song together was 2009’s “Girl and The Robot,” on a Röyksopp album. Had you known each other before that?

Robyn: Nope. We met the first day we went into the studio and wrote that song.

MJ: Röyksopp had sent you some tracks in advance, though? Did you turn anything down?

Robyn: “Just liking something doesn’t always mean that you can use it.”

Robyn: No, I turned some things up. [Laughs.] I don’t turn anything down. There were so many things they sent that I really liked, but just liking something doesn’t always mean that you can use it. Some things just evoke ideas and feelings in you, and that has nothing to do with good or bad—it’s just what resonates at the time.

MJ: Were you trading ideas back and forth beforehand?

Brundtland: Robyn had heard some instrumental bits, beats and stuff like that, but I don’t think that was necessary. Either way, it can be slightly—I wouldn’t say scary—but you can crash and burn. That’s what it can feel like when you’re meeting up with someone and you’re supposed to make something that’s really good. But when we met up it wasn’t like that at all.

Robyn: No. And all my [past] experiences are like that. ‘Cause I had a period when I working and writing with professional songwriters, and I always dreaded it. It was so horrible to work that way.

MJ: What made it so horrible?

Robyn: It was early on in my career when I was in another type of world. It was never really people that I liked what they did. It’s never like, “Oh, I don’t really like this guy, but maybe, maybe if we work together some more we’ll start to like each other.” It’s either you click or you don’t.

MJ: I’ve read that each of you was each at an impasse before deciding to do this current album. How so?

“What we did with Robyn felt—this sounds a bit cheesy—but a bit cathartic.”

Robyn: I don’t know how detailed I would like to be, but I was definitely exhausted after touring a long time. I was not in a good place at all. I was really looking forward to making more music, but I just didn’t feel like I had had enough time off after the Body Talk albums to make my own album. And I was looking to start collaborating with other people in a different way, where I didn’t want the music to become an album. I just wanted to make music and see what happened.

Brundtland: Looking back, I think that we subconsciously thought that we’ve had a nice run with our albums. They represent something different, all of them, and conceptually it’s just progressed. So I guess we were looking for something to break up that thing a little bit.

Berge: I think doing what we did with Robyn felt—this sounds a bit cheesy—but a bit cathartic. To make it even more cheesy, it gives life a bit of purpose. I personally was in a place that I wasn’t too comfortable with.

Brundtland: It felt new, because we didn’t really set out with that plan or anything like that. But just creating this album, which is referred to as an EP, you get a feeling of “I want more.” We have heard people say that they wish it was longer, and that’s so much better than “I wish the album was shorter.”

MJ: And people skipping past tracks.

Brundtland: Yeah. That exists—18-song albums with a lot of unnecessary stuff.

MJ: Robyn’s Body Talk was a series of three shorter releases. Do you think that sort of capital-A album—where you pack in as many songs as possible—has lost relevance?

“It’s not weird to release short albums anymore, and people get better music too.”

Robyn: I hope so. It’s a horrible way of working, actually. I mean, I don’t mind taking time off to make an album. If it takes a long time, it does. But then to spend two or three years promoting it? It’s fucking insane. I’d rather spend that time making new music. I think back in the day when pop music started, people made albums every year, and you played music live that people hadn’t heard before you released the album. It was like a constant production period. Everything was slower and you could sell more records, of course, but it kind of worked in a different way then.

Then the ’90s came, and everything changed and became really heavy marketing. It totally destroyed everything. We all started our careers around that time. The way it is now is so much better creatively. You can set your own pace. It’s not weird to release short albums anymore, and people get better music too.

MJ: So you’re are no longer beholden to big record labels?

Robyn: Yeah. I don’t make any records anymore in collaboration with the record company. I make them on my own, and deliver them when they’re done. There’s this way of thinking about an album like it’s something that doesn’t exist anymore, but I don’t think it’s true. It’s just chopped up into different parts. You might release it in parts like I did with Body Talk, or do a mixtape and album, or a mixtape and an EP. For me, an album is more like a period of time where you’re thinking in a special way, exploring something. It doesn’t have to be one release.

MJ: Do you guys have a similar setup?

Berge: We’ve always done it so that we make the album and then sort of say, take it or leave it. We have our own label, same setup as Robyn. When we’ve said what we want to say, we’re finished. No fillers. It’s not like your 1998 hip-hop album, which is 80 minutes long and 48 tracks.

MJ: Did you have a bigger collaboration in mind when you started working on these songs?

The Inevitable End “has got a dark energy and I think it’s very sincere in many ways.”

Brundtland: We just enjoyed getting together. When we’re together we do things like we’re a band, so then we are a band I guess.

Berge: And although there is Robyn and there is Röyksopp, the tracks are neither Robyn nor Röyksopp; it’s something else.

MJ: You’ve referred to “Do It Again” as an accidental song. How is a song accidental?

Robyn: It wasn’t accidental in that “Wow, I wrote a song without knowing it.”

Brundtland: Well, the monkeys and the typewriters.

Berge: Shakespeare. Sometimes we have an idea: Let’s write a song about sadness, whatever, and it’s going to be 94 beats per minute. Let’s go. But in this instance the track sort of dictated itself. We didn’t know where to take it.

Robyn: We followed it, kind of.

MJ: How often do you start taking something in one direction and have to pull back?

Berge: We’re so professional and good that we don’t do that anymore.

Berge: Never. [Laughter.] Sometimes we would try a few things you know will absolutely not work, but you have to do it. Just like I had to see the latest Spiderman movie. I knew it would be shit, but I had to just see it anyway. It’s a bit like that.

Robyn: But I also think when you’ve made music a long time—I’m not trying to sound like a prick—but you kind of know. Like, let’s not try anything that isn’t good enough.

MJ: How does The Inevitable End compare to Senior, your previous album?

Berge: It’s not like Senior. It’s got a dark energy and I think it’s very sincere in many ways.

MJ: It feels closer to the heart?

Robyn: My new album will be “messier…It’s a raw energy and it’s based on a club world.”

MJ: How about you, Robyn?

Robyn: Markus Jägerstedt [from her touring band] and I are working on an album that we’ve made together with a producer.

Robyn: Will be. The album is made with producer Christian Falk. I worked with him on my first album that I recorded when I was 16. So I’ve known him half of my life. We became good friends and we kept working in different ways and he passed away a couple of weeks ago from cancer. We’re finishing without him, which is a really strange experience, but also a really beautiful thing because we get to be around the memory of him and the music a little bit longer. It was something we started before he knew he was sick. So it was a real collaboration between me and Christian, and then Markus came in as well. It was like a band effort.

MJ: How does it compare with Body Talk?

Robyn: We’ll see. I think it’s messier than what I usually do, because Christian was messy. It’s a raw energy and it’s based on a club world. I think it’s going to be fantastic, I’m really happy about it.

MJ: Do you think you’ll join up again for a sequel to Do It Again?

Berge: We say be-bop-a-lula she’s my baby, Scooby Doo, Daddy-o. We don’t have any plans. That’s the way we operate.