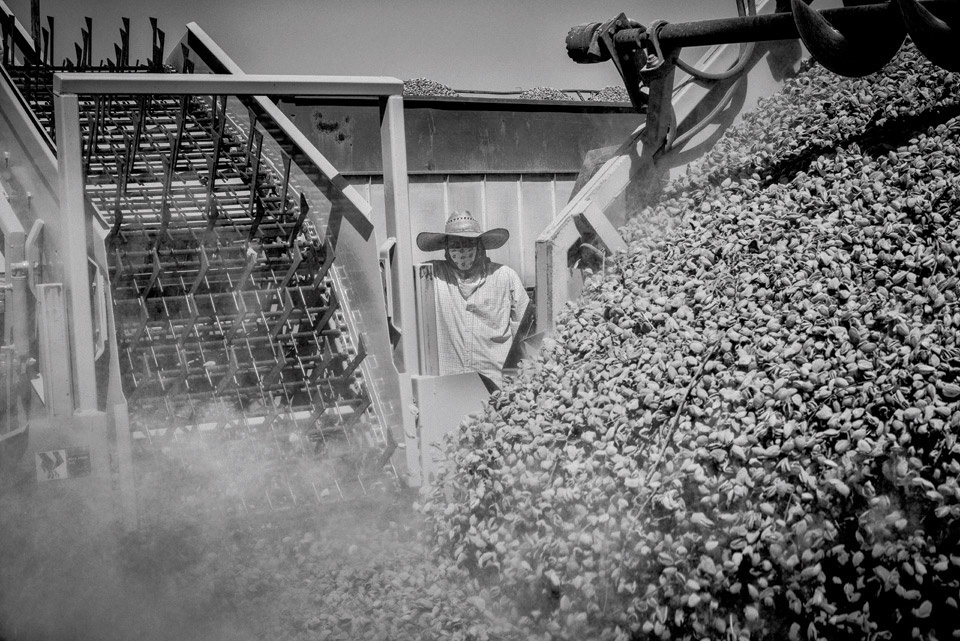 A worker watches an almond harvesting machine dump nuts near the town of Kerman, California.

Photographer Matt Black remembers the moment in December 2013 when he realized the drought in California had begun. The brown-hills in the horizon stretched into a cloudless blue winter sky. It was quiet. Too quiet.

“It was just this, yawning kind of silence,” Black says. “And that’s when I started working. It was just clear that this was going to be really bad.”

Black has spent the better part of the last year documenting the drought. “For most of it I felt like I was coated in dust—in my eyes, my ears, my cameras—everywhere.” In the summer, the temperature rose well above 100 degrees. “One day I was taking pictures of abandoned fields near I-5. It was a 114 degrees and the dust was blowing and there was not a single bit of green in sight,” he says. “At that moment, it felt like the entire Valley was about to catch fire.”

His photos, which have appeared in The New Yorker, Time, and National Geographic, among other publications, offer a glimpse into the lives and livelihoods of the Central Valley. In black and white, Black, who was recently named Time‘s Instagram Photographer of the Year, aims to capture “the flatness, uniformity and to a certain extent monotony of this way of farming. He adds, “It’s not a land of quaint little farms and pastoral scenes. These are factories, and that’s why they are important—because they feed millions.”

But it is the people who reside in the communities hit hardest that Black hopes to highlight with his work—those who are forced to drink water from bottles, who cannot flush a toilet, or take a shower without the use of a bucket. “Yes, the drought is huge and catastrophic and all those things that everyone by this point is pretty much aware of,” he says. “But what people aren’t aware of is how that filters down to some of these towns. What photos are really best suited for is to try to put a face on the problem—to make it concrete and real.”

All photos by Matt Black. 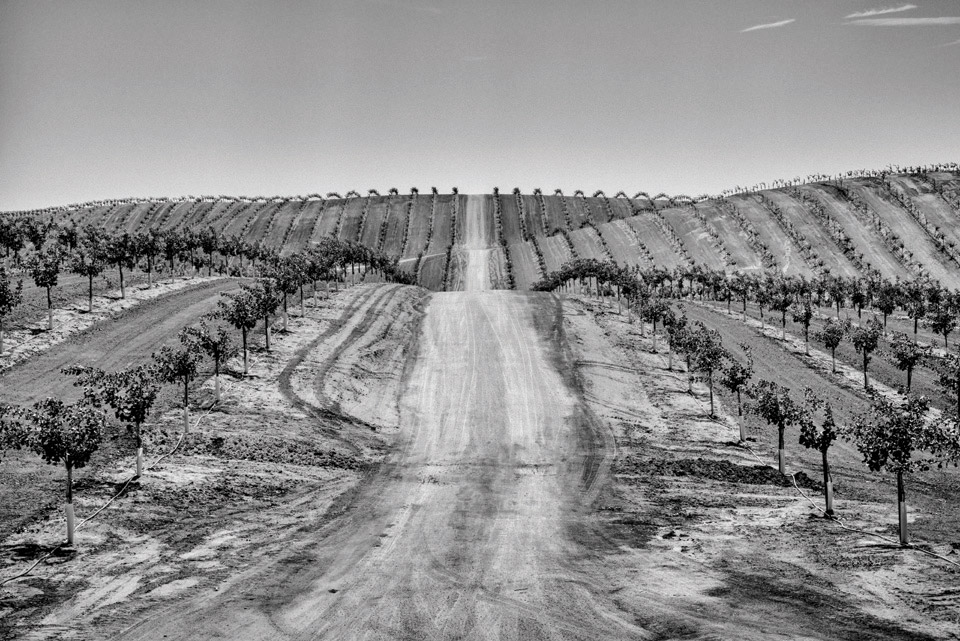 Near the town of Ducor, California, a newly planted pistachio orchard. 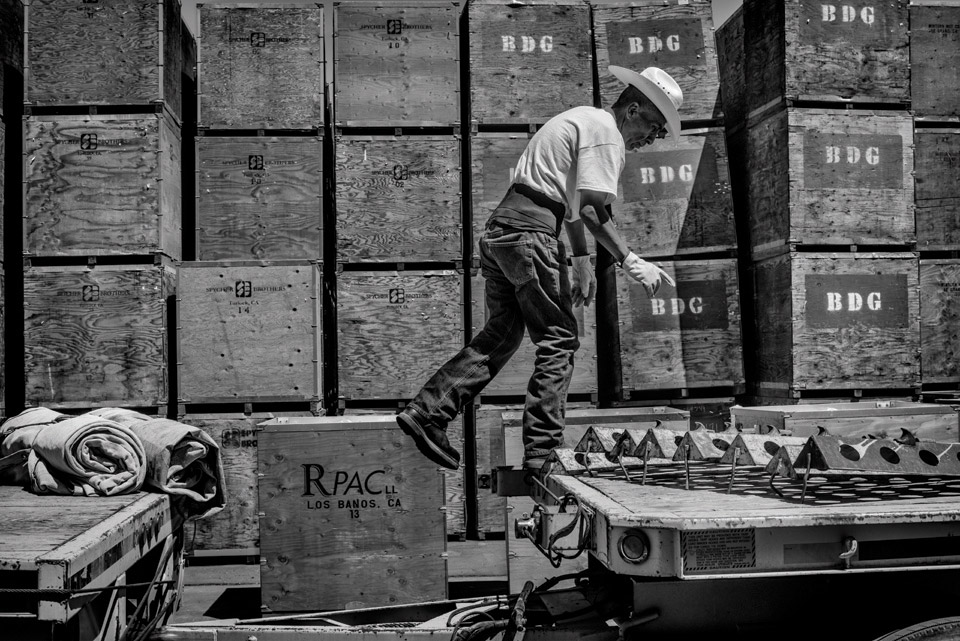 A worker loads crates of almonds at a processing plant near Los Banos, California. 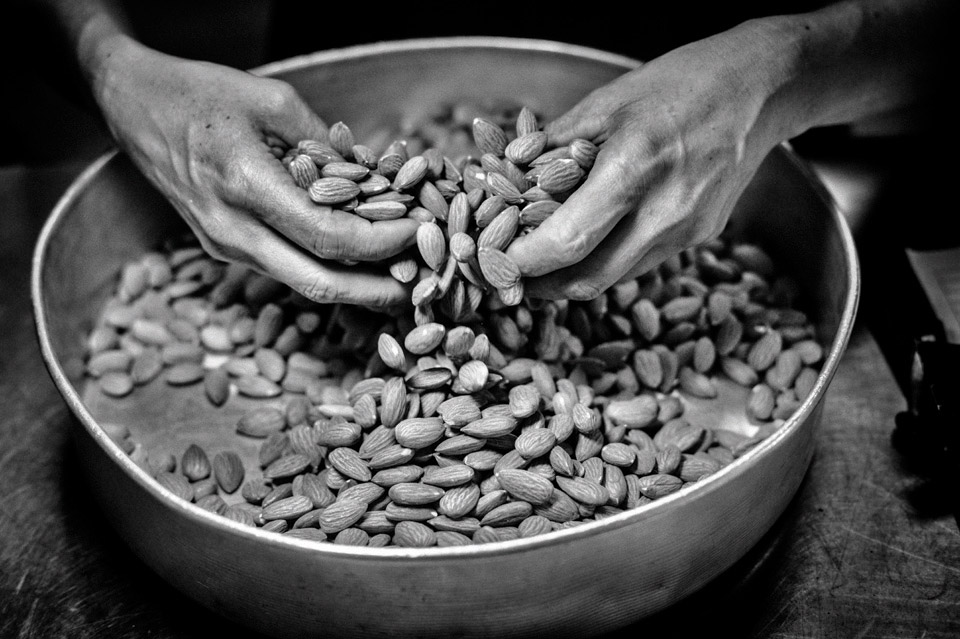 A worker sorts almonds at the processing plant near Los Banos. 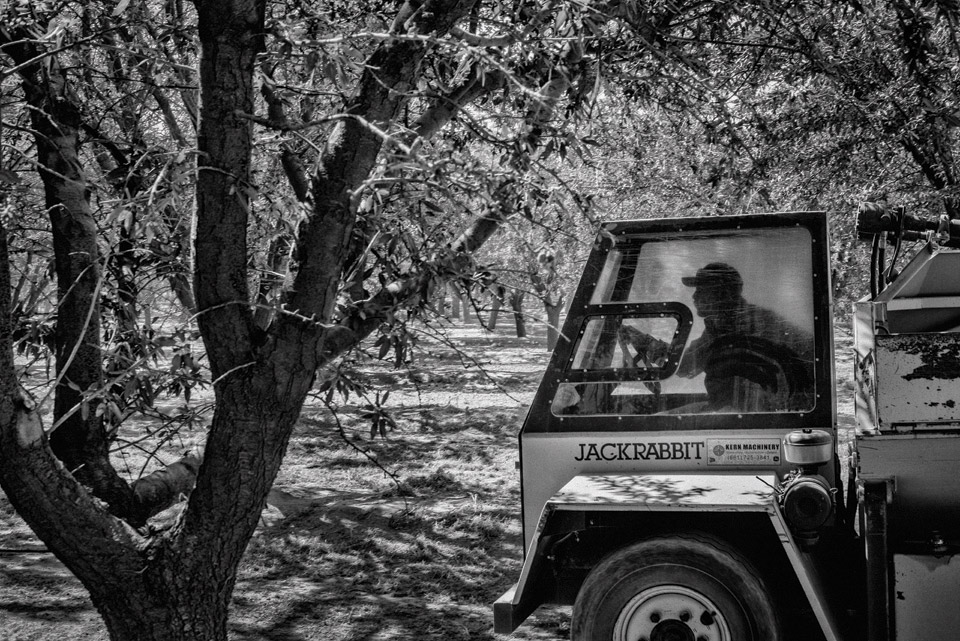 A worker drives an almond-harvesting machine in an orchard near the town of Kerman, California. 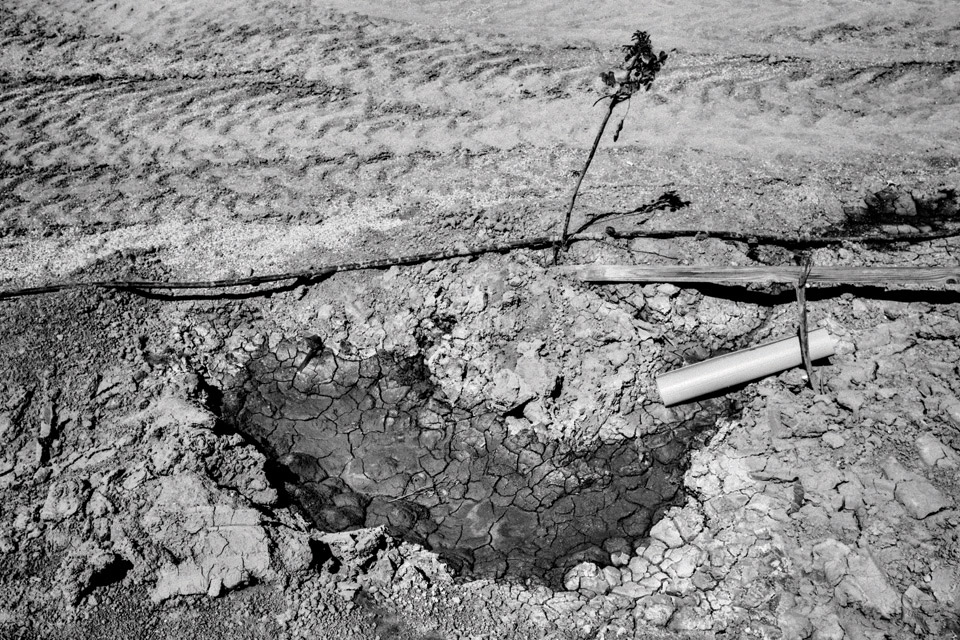 A pistachio tree in a newly planted orchard near the town of Alpaugh, California. 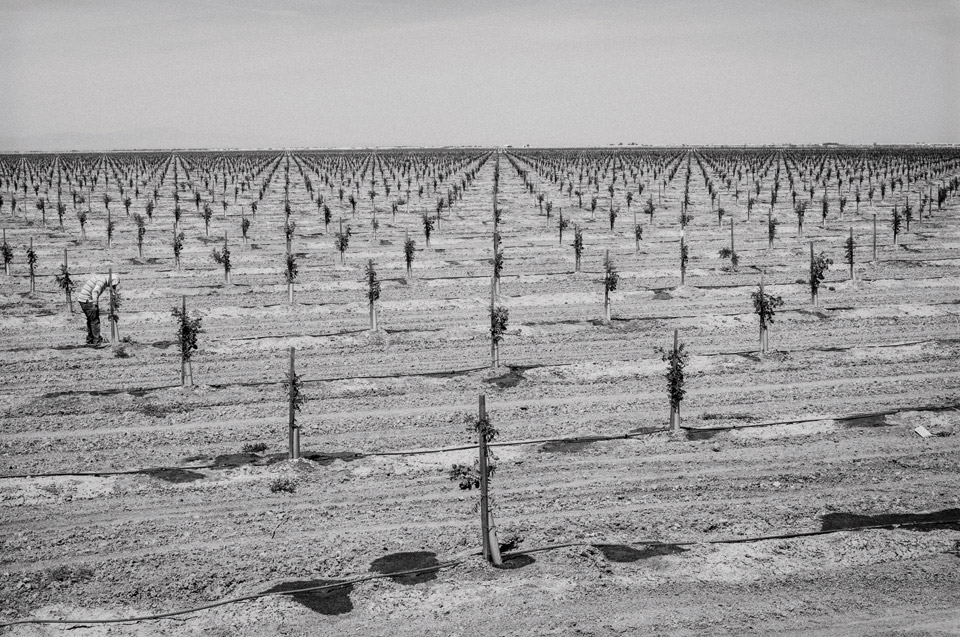 A worker checks pistachio trees in a newly planted orchard near the town of Alpaugh, California. 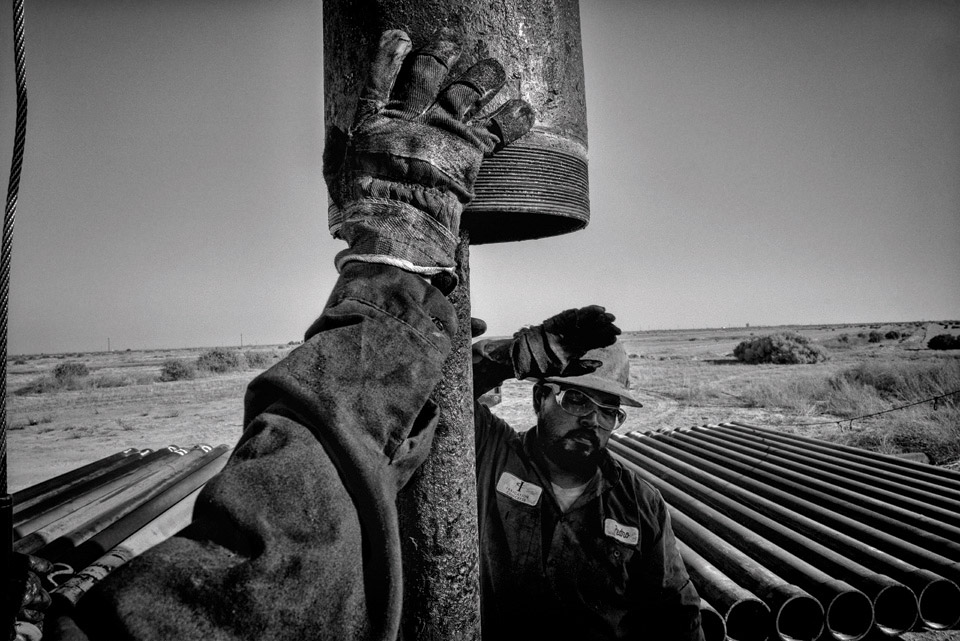 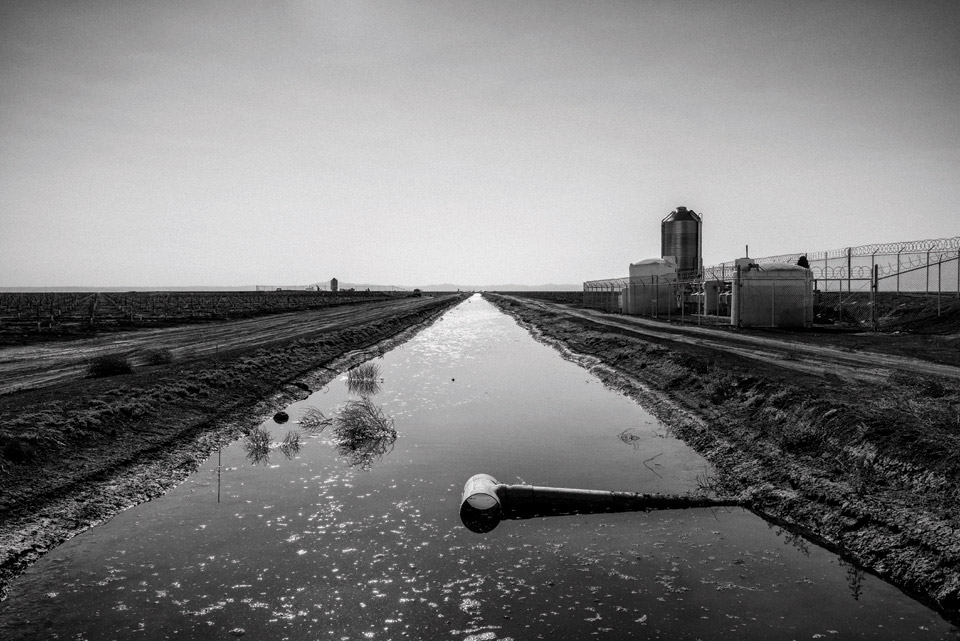 Water pumped from wells fills a storage canal in a newly planted orchard near Alpaugh, California. 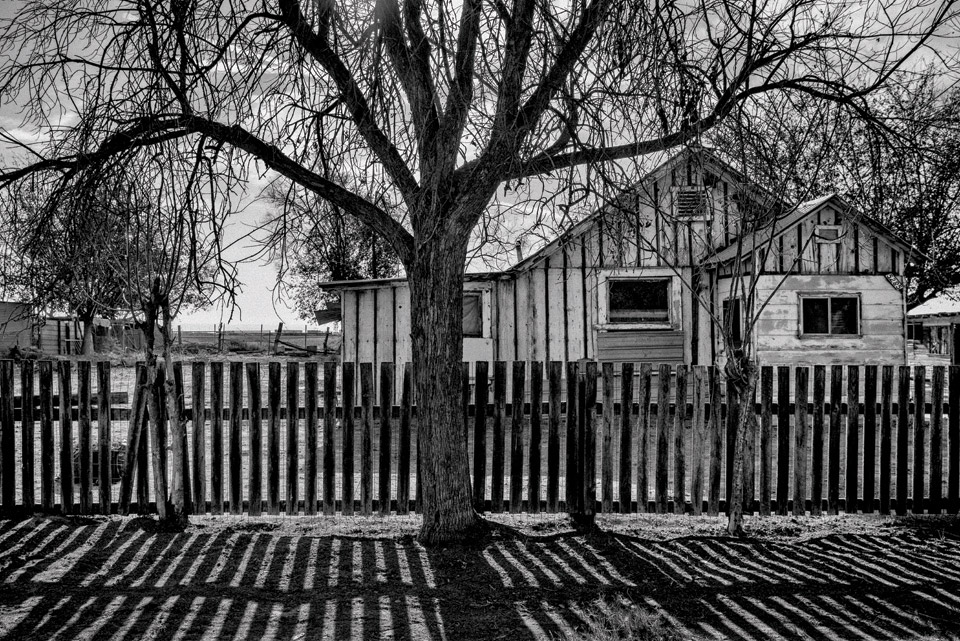 A home in the town of Alpaugh. Overpumping in nearby orchards has forced the closure of one of the town’s wells, and Alpaugh’s water supply now has high levels of arsenic contamination. 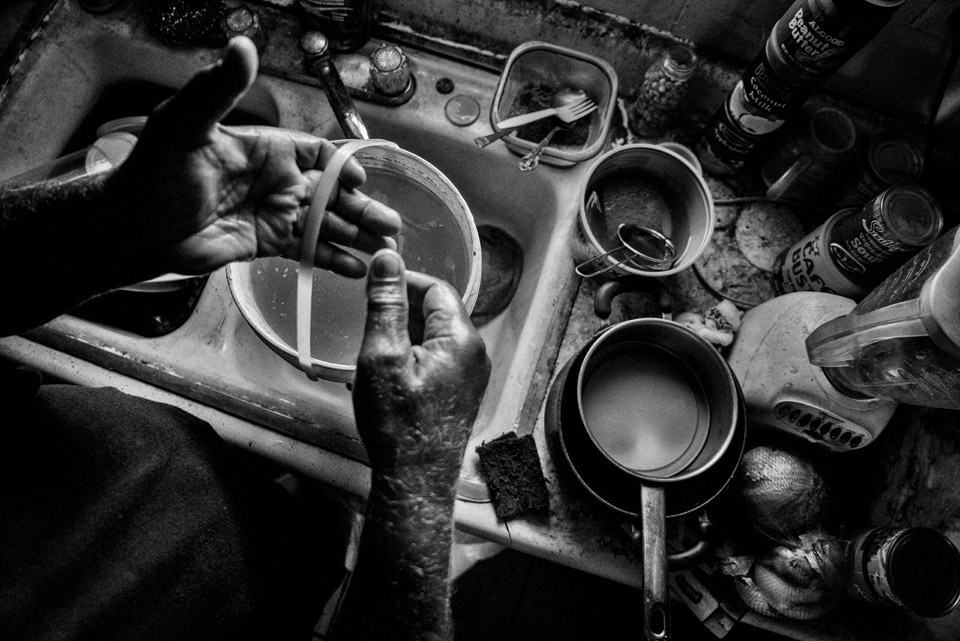 Jorge Cruz collects water from his kitchen sink at his home in Alpaugh. 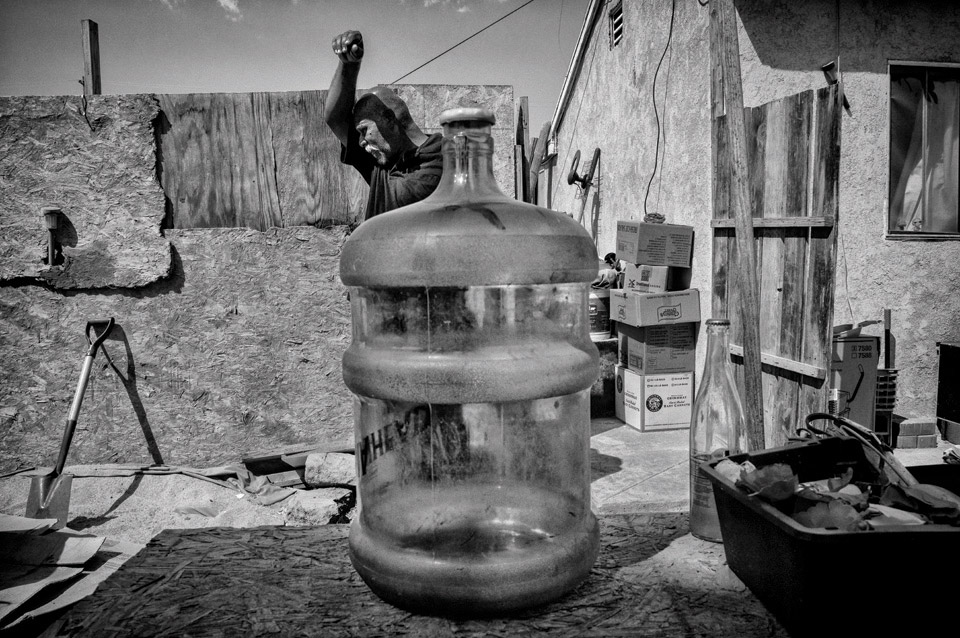 Jorge Cruz stores drinking water at his home in Alpaugh. 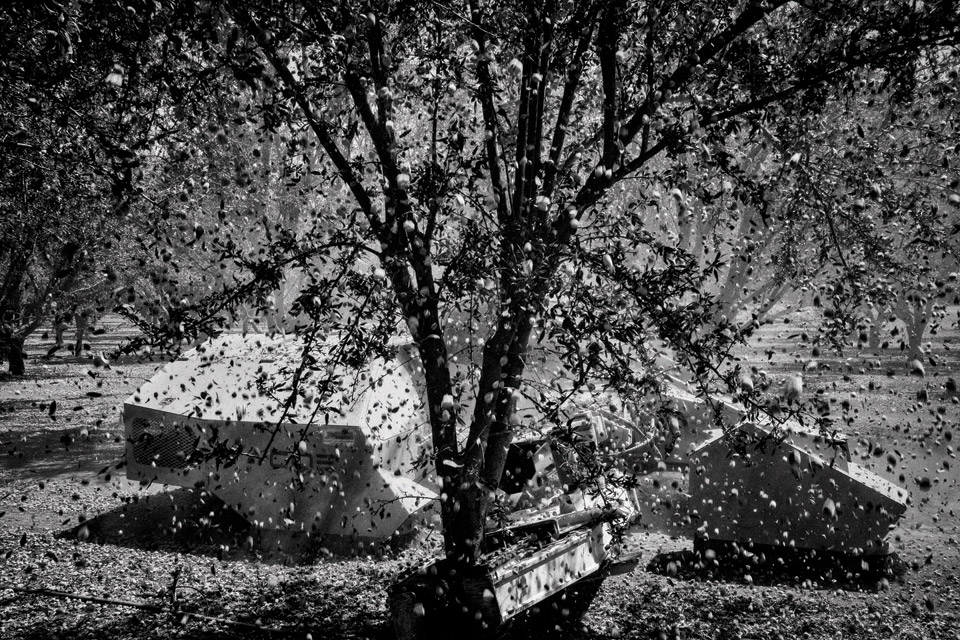 An almond shaker knocks nuts from a tree in an orchard near Firebaugh, California.