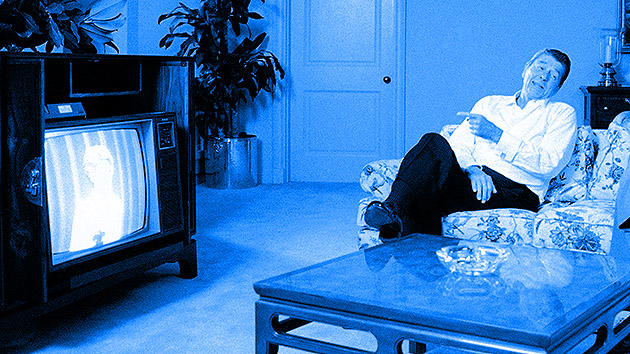 When President Ronald Reagan took office in 1981, he became the first president to receive Central Intelligence Agency briefings in video format. The CIA produced more than 40 short informational videos for Reagan, ranging from evening-newsy looks at topics like the Chernobyl nuclear accident (below) to profiles of foreign leaders. 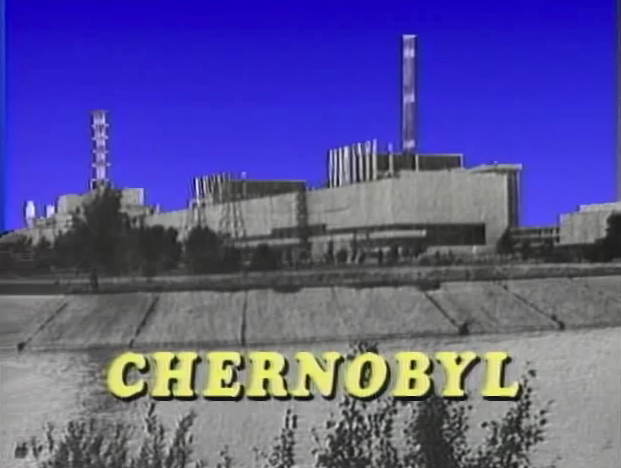 Bob Woodward and others have maintained that Reagan preferred these videos since he was not keen on heavy reading. Not so, says CIA historian Nick Dujmovic. “This myth is supported by Reagan’s purported preference as a former career actor in films and television and by the old perspective of Reagan’s simple-mindedness,” he asserts in an agency report on the Great Communicator’s consumption of top-secret intelligence. While Reagan found the videos helpful and asked for more, the original idea for the televised briefings was the CIA’s. The president still received regular written and in-person briefings, Dujmovic writes.

The CIA declassified and released several of the videos in 2013, including this look at how the Soviet media portrayed the United States. It’s worth a watch as an ’80s-tastic Cold War relic, featuring cameos by Michael Jackson and Rambo. There are also references to the Russian translation of oral historian Studs Terkel’s Working and the state-run newspaper Pravda‘s interest in Native American activist/prisoner Leonard Peltier. The agency refrained from criticizing the Russian media for translating the title of Jackson’s Thriller as Film of Horrors.

“The Soviet media,” the CIA narrator explains, “portrays the US political system as an oligarchy ruled by big capitalists who control the impoverished masses. Moscow radio said recently that the American public has been lulled by the demagoguery of politicos whose services have been bought by capital.”

You can read the full transcript after the video.

Transcript of “The Soviet Media’s Portrait of America”

Russian man (overdubbed in English): The people don’t have power in your country. What you have this crime, sadism, unemployment, drug addiction. I don’t think your young people do anything but harm to their country.

[Clip: “Beat It” by Michael Jackson]

Russian announcer (translated from Russian): “Beat It,” the unprecedented hit by Michael Jackson from the album Film of Horrors, which became the most popular in the history of music.

Russian woman (overdubbed in English): The Americans are preparing for war. We don’t want war. We are preparing for self-defense. America tries to supply other countries with more and more armaments. What do they need all those weapons for?

Russian announcer (translated from Russian): Today, one salvo from the nuclear submarine will bring the world 960 Hiroshimas.

Russian man (overdubbed in English): Our TV can always be trusted. I would never trust American TV. All those channels and different programs.

American narrator: In recent years, the Soviet media has said much about the American way of life, and its portrait of America is a dark one. It is designed to convince the Soviet people that our social system is anything but desirable. It emphasizes violence, drug abuse, unemployment, and overall exploitation of the American people by the government.

Since the average Soviet citizen has no alternative source of information about the United States, the Soviet version is probably accepted at face value. The Soviet people, however, seem to be curious about America and impressed by its material success. 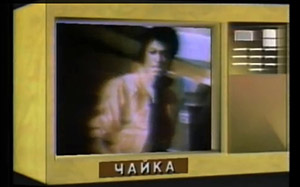 Last summer, Pravda published a lengthy article entitled “Incurable Disease,” which dealt with US unemployment and bank failures. About the same time Moscow was saying that there are million Americans who are literally starving while a select group of capitalists continues to get richer. Moscow television celebrated the Fourth of July last year by assuring viewers that America is the quintessence of an unjust capitalist system that keeps millions of families living below the official poverty line. The unemployed are described as having been deprived of the right to work while Moscow television shows film of locked factory gates and people being evicted from their homes.

The message in all this is that the capitalist system in America is unfair and is, in fact, a failure at providing for basic human needs or maintaining continued national growth. This broadly distorted statement is aimed at convincing the Soviet people that Soviet communism works much better by providing economic security for them.

The US economy as described by the Soviet media is being driven by raging militarism. Defense spending is reported to be the cause of unemployment in civilian industries and also the cause of the huge federal deficit. 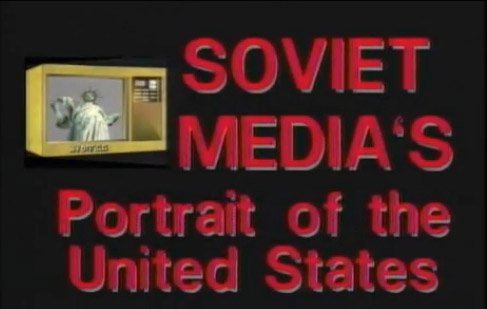 The Soviet defense ministry newspaper Red Star says that American young people are receiving militarist brainwashing from films like Rambo. Also included as malicious and distorted are Telefon, a film about a KGB assassin on the job in the US, and Red Dawn, which depicts an invasion of Colorado by Cuban and Soviet troops.

That same paper also said that President Reagan has personally participated in this brainwashing by calling on American youngsters to model themselves after John Wayne. The degree to which personalized attacks are leveled on the American president and other high American officials will vary according to immediate political circumstances in Soviet-American relations. Such attacks are a part of a more general assault by the Soviet media, which blames the US for the arms race and says that Washington follows a policy of state terrorism and international banditry. And Pravda says that the US arms policy is a mixture of falsity, hypocrisy, and cynicism.

On racial and social problems, the United States is depicted as a country plagued by discrimination where the situation is getting worse rather than better. According to Moscow television, so-called civil rights are a fiction; racism and racial discrimination continue to be the shame of present-day America, with white racists stepping up their activity. There is said to be no equality of opportunity, with neither blacks nor Hispanics getting a fair chance in American society. 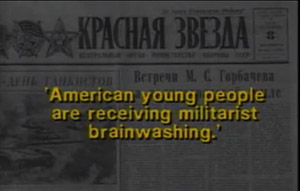 Moscow pictures racial problems as permeating American life. Minor events that get little attention from US media are presented in the Soviet Union as typical. For example, in Chicago, a Hispanic union organizer named Rudy Lozano was murdered in 1983 and two years later the only mention of him in US media is a brief story on an inside page of the Chicago Tribune, and that story was about a march held in his memory. But Pravda recently devoted a three-part series to reviewing the case as an alleged example of big business trying to keep the workers subjugated.

Another kind of Soviet manipulation is the Russian edition of American author Studs Terkel’s book Working. The unexpurgated US version reports both successes and failures in nearly 600 pages. The Russian translation is about a third as long and emphasizes the failures and disappointments of working Americans.

The Soviet media portrays the US political system as an oligarchy ruled by big capitalists who control the impoverished masses. Moscow radio said recently that the American public has been lulled by the demagoguery of politicos whose services have been bought by capital. 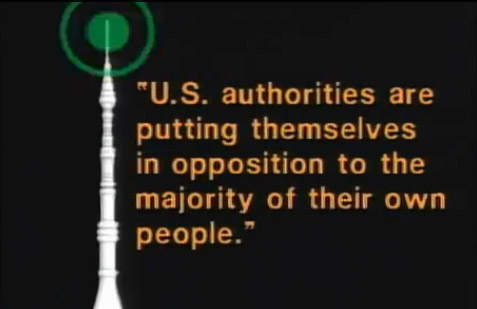 According to Moscow radio, American society is repressive. It says US authorities are putting themselves in opposition to the majority of their own people. And Moscow television said that thousands of political prisoners are languishing in US prisons today as a result of tyranny and repression of the authorities.

Moscow has seized on the case of Leonard Peltier, an American Indian activist convicted in 1977 of murdering two FBI agents. While Peltier’s case is almost forgotten here, his legal appeals getting only brief mention in the New York Times, Pravda published seven stories about him this past September. Other Soviet newspapers also ran prominent coverage. The Soviets seemed to be trying to use this case to counter Western publicity about their own political prisoners.

According to another Moscow radio report, Americans who oppose US military policy are described as peace fighters who are repressed on a monstrous scale by the American secret police. Occasional reports on American communists describe them as speaking for widespread attitudes but that they are suppressed for challenging the system. 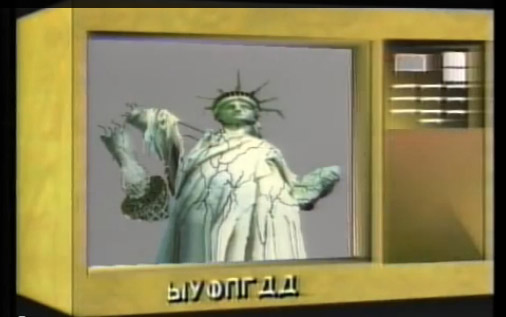 When it was suggested to a Moscow TV anchorman that Soviet media distorts news about America, he replied:

Russian anchorman: I think that we are not distorting news. No, I would disagree with you because we are showing not only unemployed, we’re showing millionaires. We showed their private lives, we showed the high society, we showed Miss America.

American narrator: Recently, Moscow television presented the dramatization of the American novel The R Document by Irving Wallace. The story’s theme deals with the suspension of the American Bill of Rights and is set sometime in the future. Moscow television sought to use this theme to make its point about the future of America. A TASS commentator said that “The sense of hopelessness and fear the future are dramatically pushing up suicide, crime, drug addiction, alcoholism, and divorce statistics.”

In the final scenes of the famous story “The Picture of Dorian Gray,” the portrait takes on an ugly, even hideous, appearance, and the Soviet media seems bent on portraying to the Soviet people a similar vision of America.

With translation assistance from Hannah Levintova