Shrinking newsrooms, digital “churnalism,” and armies of pundits carving up increasingly divided audiences—that’s the media we’re told we must accept to live in America today.

From Boston to Ferguson, Baltimore, and Charleston, one thing has become crystal clear: To get real reporting—and to get it fast—you’ve got to switch off cable and go local. It’s here you’ll find the scoops, the sense of place, the authentic compassion; it’s here you can avoid the predictable blather from a candidate, or pundit, or hack filling airtime. It’s here you’ll find out what’s really happening to a particular group of Americans who have just been shoved into a tragic spotlight. Turn off the TV and Google the local paper on your phone. Find their Twitter feed. Follow their journalists.

Take Charleston. During the early hours of the story on Wednesday night, cable news frustrated viewers by coming late to the game, according to this breakdown by Adweek‘s cable-addict Mark Joyella. (CNN was first to report the news just after 10 p.m., and it stayed with the story, Joyella writes—though it attracted criticism on social media for simulcasting a live feed from its global operations, CNN International, instead of staying domestic.) When Fox News and MSNBC got into the story on Thursday, their programs lined up the usual suspects to engage in a cliched debate over the national narrative: Was it guns? Was it race? Was it mental illness? And the nationally televised blame game began in earnest: While Fox mused about whether pastors should pack heat, and attacked President Obama for bringing up gun control, MSNBC commentator Michael Eric Dyson criticized the president for “obscuring” race with guns: “When will this president finally see that he doesn’t have to run from his race or run from blackness?” Dyson said. I could go on.

Meanwhile, the Post and Courier, Charleston’s major daily newspaper—winner of the 2015 Pulitzer Prize—seized its hometown story immediately, posting an article just before 10 p.m. the night of the shooting. It hasn’t stopped pumping out sensitively reported articles from deep within the affected community since that first notice. The paper assigned somewhere between a half and two-thirds of its newsroom of 80 people to the task of covering the unfolding story, trying to patch reporters in on shifts as much as possible to keep them from burning out in the field. After covering the death of Walter Scott two months ago, the newsroom was experienced in switching into high gear, “though you’re never quite prepared for any of these things,” Mitch Pugh, the newspaper’s executive editor, told me on Friday.

“I think we’re able to report on those issues in a more responsible and authoritative way than some of the outside media.”

For this newsroom, it’s personal, and reporters have begun to feel the strain. “A lot of our folks know people who were either in the church or close to people in the church,” Pugh said. “We’re trying to get people more into a shift mode, and get some mental health breaks, and some downtime to get some rest.”

Some reporters, he said, just “don’t want to let go of it.” That’s the nature of reporting in a city traumatized by an event of this magnitude.

Much more so than the bigger guys who parachute in, the major advantage of being the hometown paper is that this newsroom gets it. The journalists “understand deeply the complex relationship this community has had with the issue of race,” Pugh said. “I think we’re able to report on those issues in a more responsible and authoritative way than some of the outside media.”

Cable television has been on the ground in Charleston, doing reporting and making sure Lindsay Graham and other candidates answer tough questions about a Confederate flag flying near the statehouse. But not like the Post and Courier, whose coverage has sharply focused on the community—its grieving, the memorials, intensely moving profiles of the victims, and political reactions—rather than simply the obsessive speculation about the motivation of the alleged killer, 21-year-old Dylann Roof.

It’s a way for the paper to “focus on our community, on the victims, on the efforts to come together and heal,” Pugh told me. 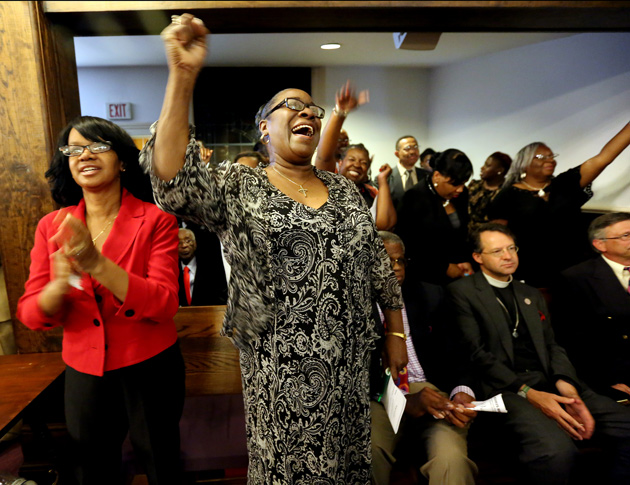 Mourners cry out during a prayer vigil held for the victims of Wednesday’s shooting at Emanuel AME Church in Charleston. Grace Beahm/The Post And Courier/AP

That intimacy with the community has led to some extra caution. With the stakes so high, getting it wrong is simply not an option. The newspaper, for example, knew the names of some victims on Wednesday night, but waited until they were confirmed through more official channels before reporting them. Any error would be magnified under the strain of shock and anger. “We weren’t interested in being first on that,” Pugh said. “We were interested in being right.”

But they could not get everything right. When newspapers hit the streets on Thursday, some were affixed with a jarring advertisement for a gun shop just above the headline: “Church attack kills 9“. The outraged reaction was immediate and the paper apologized. “I think that being forthright and honest and taking responsibility, most people will understand and accept that,” Pugh said of readers who called and wrote to complain. The paper now has policies in place “to ensure that does not happen again,” he added.

Accentuating the irrationality of the Charleston news, the paper puts an ad for a gun shop on the front page today. pic.twitter.com/GyAW4EcKF1

The increased profile may have also led to unwanted attention in the form of a potential hacking attack against the paper’s website, which became inaccessible on Friday for “20 to 30 minutes at a time, sporadically,” across the morning, Pugh said. The companies responsible for hosting the website investigated the possibility of an attack. “It’s starting to look like someone tried to take our site down,” Pugh told me, though it was too early to confirm.

The Post and Courier’s response to the massacre is reminiscent of other newspapers dominating the coverage when tragedy strikes in their communities: the Baltimore Sun’s relentless coverage of the protests after the death of Freddie Gray; the Boston Globe’s award-winning coverage of the Boston Marathon bombings and manhunt; and the St. Louis Post-Dispatch’s forensic, visually powerful, and also award-winning coverage of the death of Michael Brown and the furious protests for justice in Ferguson. There’s little wonder there’s some camaraderie among these city papers. In April, the Boston Globe sent lunch to the Baltimore Sun’s newsroom, a way of paying forward another act of generosity when in April 2013, the Chicago Tribune bought the Globe pizzas during the bombing coverage.

A letter from the Tribune to the Globe read: “We can’t buy you lost sleep, so at least let us pick up lunch.”

In each of these papers: heartbreaking, personal stories, rendered powerfully, whether a national audience was watching or not.

The Post and Courier’s approach can be felt in the op-ed pages, too. A Thursday editorial read: “A shared revulsion for the killer’s inhumanity—and for the persisting poison of racism that apparently sparked his barbaric deed—unites us. A shared commitment for a better, more understanding future drives us.”