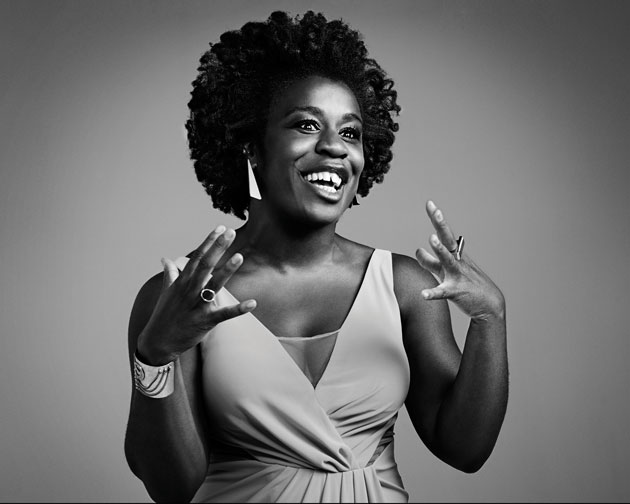 UZO ADUBA KNEW Orange Is the New Black would be a hit when strangers started calling her “Crazy Eyes.” That’s the nickname of her character in the Netflix prison drama, which starts its third season June 12 and has been renewed for a fourth. The 34-year-old actress was raised in Medfield, Massachusetts, where her parents settled in the wake of Nigeria’s civil war. After training as a classical vocalist in college, Aduba landed roles in Coram Boy on Broadway and in a New York City Godspell revival. In 2012, she auditioned for what she believed was a bit part in Weeds creator Jenji Kohan’s latest series; it has culminated in 2014 and 2015 Emmy wins for her portrayal of Suzanne “Crazy Eyes” Warren, the enigmatic, eyeball-popping inmate who writes bad poetry to express her (unrequited) love for main character Piper, and even responds to one rejection by peeing on the floor of Piper’s sleeping area. Aduba also recently scored roles in the musical movie Pearly Gates and the period film Showing Roots, in which two women try to unite their small town around showings of the Roots miniseries based on Alex Haley’s 1976 slavery epic.

Mother Jones: Did you ever imagine, when you signed up for a two-episode gig as a character called Crazy Eyes, that you’d one day be talking to a reporter about season four?

Uzo Aduba: Not at all. All I wanted was to make it through—I was told two episodes, maybe a third. My only goals were to do good work and not get fired.

MJ: At what point did you know the show would be a success?

UA: I was up in Utah in the mountains, and I had no phone service. I was like, “Wow, I’m getting a lot of Twitter followers—that tweet I gave yesterday must have been really sassy.” When I came down from the mountain I realized, meeting people on the street, that people watch our show and they’re really enjoying it.

“I don’t think Netflix goes to prisons. But we have former inmates who have said that they watch the show.”

UA: Not as much as they did initially. I hadn’t worked on TV before, but now, because people have seen my face in a different way more, they’re like, “Your name is Uzo, right?”

MJ: Do you hear from women who have been in prison or are currently doing time?

UA: I don’t think Netflix goes to prisons. [Laughs.] But we have former inmates who have said that they watch the show. I have been so impressed when they say how much is spot-on—men and women.

MJ: How has working on Orange Is the New Black changed your view of prison life?

UA: When I read the second script, I remember physically stopping and realizing, “Wow, we are telling human stories. This is someone’s mother, this is a daughter, this is a neighbor, this is a friend.” When it stopped being about their crime or their number or their jumpsuit, I could see them fully as people.

MJ: Did you see yourself in any of the characters in Piper Kerman’s memoir?

UA: I identify parts of myself in Suzanne—as foreign as she is to me. I think that’s why people are drawn to the show. When you start to see that Jenji is telling the story of people rather than “criminals,” you start to realize, “Oh, I am that person.” It’s a minimum-security prison. A lot of these people, it was only a small choice that led to them being in this world, and I think that makes it highly relatable.

“When I read the second script, I remember physically stopping and realizing, ‘Wow, we are telling human stories. This is someone’s mother, this is a daughter, this is a neighbor, this is a friend.'”

MJ: Suzanne is childlike but also kind of intimidating. How do you get to that place?

UA: I did a lot of walking to invite her in—and to put her down. With Suzanne, all the toys need to come out, like a treasure chest, you know. You’re not just looking for the one toy on top of the chest, because that innocence, that purity children have—there is no agenda or positioning that goes into their activities. They just do. All of the toys need to come out, and we’ll think about cleaning it up afterward.

MJ: Where would you walk?

MJ: Did you always want to be in showbiz?

UA: I thought I was going to become a lawyer—that’s the more traditional immigrant path. It was through the encouragement of my mom, who exposed me to the arts—and my teacher during my junior year of high school changed my life. She was my drama teacher and also my creative-writing teacher. I was going to apply to study international relations, and she told me that I should go to art school instead. I’d never even thought of that.

MJ: What did your mom expose you to?

UA: She made me get up with her every Sunday morning to sing in our church. I liked to sing, but I didn’t know I was decent. I’m one of five, and she never made any of my siblings be in the choir. I was always so irritated, because it was like a half hour earlier than service. Mr. Hersee, my sixth-grade music teacher, had me sing in a recital that year. It wasn’t until that recital, when I was singing Whitney Houston’s “I Will Always Love You,” that I was like, “I think I can sing!” I remember having that thought because there was applause and everybody stood up.

MJ: How did being a child of immigrants affect your upbringing?

UA: You can’t live in a town like Medfield and not be keenly aware that your name doesn’t sound anything like anybody else’s. And even more to the point, you look like absolutely no one else there. It’s a very homogeneous community—a beautiful community—but I was very much aware that this was not an immigrant hub. At my high school graduation, my whole family came. Up until early adolescence, everybody wants to fit in. But by then, I wanted everybody to come dressed like where I’m from, in traditional clothes. It was amazing, all these beautiful colors and fabulous traditional dress. Everybody felt so proud to be able to show up at an event in Medfield and know that their daughter, their niece, was proud to have them there as they are.

“African stories are missing. First-generation stories. Female-driven stories. I would love to see my own story, because I know I’m not alone in being where I’m from.”

MJ: So what’s your dream project?

UA: I want to tell the stories of the missing—the people we don’t see in our daily narratives, whose voices aren’t heard. In terms of biopics, I’m drawn to the Nina Simones of the world, the Leontyne Prices, the Marian Andersons. African stories are missing. First-generation stories. Female-driven stories. I would love to see my own story, because I know I’m not alone in being where I’m from.

MJ: Your latest film involves the Roots miniseries. When did you first see it?

UA: I watched it after I read the book because I was so fascinated—and my mom was so impacted when it came out because she had never seen that story before. When I watched it again for Showing Roots, I was like, “I can’t even believe, at a time so close to when the Civil Rights Act was passed, something like this was made with such honesty.” The book is phenomenal. It’s an amazing story.

MJ: You took a selfie with Hillary Clinton at this year’s EMILY’s List gala in Washington, DC. Are you ready for Hillary?

UA: I was born ready. [Laughs.] She’s a remarkable candidate. I was giving a speech, and you’re looking out and there’s Hillary Clinton, and she wasn’t just listening and nodding at the right moment, but really listening. When we were able to chat behind the scenes, I was like, “Wow, what an incredibly gracious, down-to-earth, thoughtful woman.”

MJ: Does she watch Orange Is the New Black?

UA: I didn’t ask. We weren’t really in that sort of world.

MJ: With Pearly Gates under your belt, can we expect more singing roles from you?

UA: It’s in me. I don’t think I could even stop it if I wanted to. I never felt like I wanted to only be an actor or a writer or a singer. I just like to make things. I want to tell honest stories, good stories, whether through music or pen or through words or actions. That’s all I want to do.