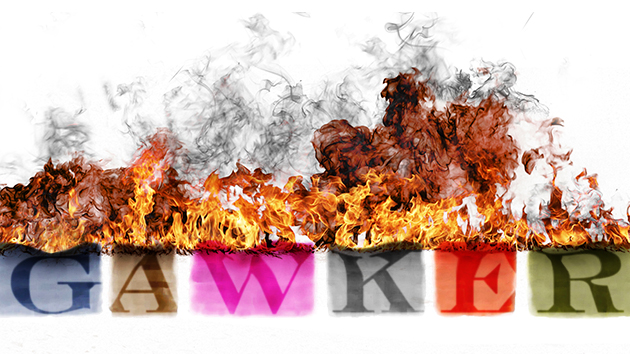 The article, by 27-year-old staff writer Jordan Sargent, was based on texts provided by a man who tried to blackmail a publishing executive, and left a trail of destruction after it hit Gawker’s front page last Thursday. Gawker thrust an arguably private individual into a media storm about journalistic ethics, and prompted top-level resignations after the site’s publisher deleted the post a day later, an act that staffers said breached a sacred divide between editorial and business operations. Multiple rounds of knife-sharpening and bloodletting ensued.

A quick turnaround on a big scoop
The timeline provided to Mother Jones adds a new detail to accounts from inside the company about how events transpired, pre-publication, and could raise tricky legal questions if the publishing executive chooses to sue Gawker.

Nick Denton, the site’s founder and publisher, has written that the publication of the article was “a close call around which there were more internal disagreements than usual.” He later wrote, “We believe we were within our legal right to publish,” implying that at least some legal consideration went into running the story. The reporting, research, and these sorts of weighty discussions and dissents, as described by Denton, all took place in one day, according to a staffer. (Denton did not respond to an email requesting an interview for my story. Sargent also declined to be interviewed.)

The rush to publish could be a problem. Renowned first amendment lawyer Floyd Abrams told me that while the ultimate defense in any libel suit is whether or not the facts are true, Gawker’s internal processes could have some bearing on the jury. “There’s no doubt that the jury would be presented with evidence which would reveal the internal deliberative process,” he said. A lack of due diligence, he explained, would bear “directly on whether they acted negligently.”

Another issue is the question of whether the person was a public or a private figure. If the person were ruled to be a private figure, the standards for libel are lower than for a public one. Abrams points out that “if he is a private figure then it depends on what state the action is brought in to determine the level of care, but it can be as little as negligence, acting irresponsibly under the the circumstances, in gathering the information.”

“Articles that damage someone’s reputation are typically vetted over a longer period.”

“If they didn’t spend enough time checking out the accuracy of the story, that could be used with great effect against them,” he said. “If it arose in a blackmail situation, that is also a blinking yellow light, if not a blinking red one, to take very special care to make sure it’s true.”

Ken Paulson, the president of the First Amendment Center at the Newseum Institute, and former editor-in-chief of USA Today notes, “Stories get reported and published in a single day all the time. But articles that damage someone’s reputation are typically vetted over a longer period.”

Speed itself doesn’t necessarily hamper a good vetting process, he said, especially if the reporter and editors have the goods. (Gawker claims the article is legally bulletproof.) But in a pressure-cooker situation, “Additional review may turn up issues that could give you pause about publishing,” he said.

“I just don’t think the story is about ‘outing’ at all”
One of the most criticized aspects of Sargent’s story was that he and his editors “outed” a man seeking a gay hook-up. The story seemed to many critics to be a relic from a time when simply being gay was newsworthy. “Somewhere along the way, what was once a scarlet letter became just another consonant in the personal resume,” wrote the late New York Times media critic David Carr in 2013, about Gawker’s curious obsession with outing. “A person’s sexual orientation is not only not news, it’s not very interesting.” Withering comments from readers reflected this, and Gawker’s publisher and founder Nick Denton recognized as much when he wrote last week: “The point of this story was not in my view sufficient to offset the embarrassment to the subject and his family.” He later said: “I was ashamed to have my name and Gawker’s associated with a story on the private life of a closeted gay man who some felt had done nothing to warrant the attention.” (Based on Sargent’s reporting, it’s unclear whether Gawker’s subject was indeed closeted.)

But the same staffer I spoke to with behind-the-scenes knowledge said that “outing” the man played a negligible role in editorial discussions. “Gawker is not like other media companies,” this staffer said, adding that they “don’t fret about the consequences” of mentioning the fact that someone is gay. His sexuality was “so beyond the story’s consideration,” the staffer added later. (Denton told the Daily Beast it’s not his job to sign-off on individual articles for Gawker, and while he knew about the piece, he hadn’t read it before publication.) Editor-in-chief Max Read and executive editor Tommy Craggs have publicly claimed responsibility for the article.

“We have never, never shied away from outing people,” said a Gawker staffer.

Instead, the focus of the writer and editors was on detailing “the lengthy story about his attempt to arrange this multi-city, bizarre meeting in Chicago,” the staffer said. “Obviously it necessitated reporting that he was seeking an escort that happens to be male.” If the escort had been a female, the source argued, there would have been no accompanying backlash from critics. This, the staffer said, is a double standard: “I disagree with the premise that the outing was a big deal.”

Asked to clarify later, this staffer doubled-down: “We have never, never shied away from outing people.”

Rather than being a controversy about potentially “outing” a gay man with kids, the staffer said, “I think the more salient outrage was about whether or not he was a public figure.” He was public enough, the staffer insists. Media critics and observers have been largely uniform in disagreeing with this assertion.

But Gawker’s no-holds-barred, outing-doesn’t-matter approach risks missing a more subtle recent change in America. It’s not that readers don’t care about sexuality, as Carr argued. They might just be more sensitive: Americans are more attuned to the dangers posed by coming out than ever before. Caitlyn Jenner used the occasion of receiving an ESPY courage award last week, for example, to focus the nation’s attention on trans teens.  “They’re getting bullied,” Jenner said. “They’re getting beaten up. They’re getting murdered. And they’re committing suicide.” LGBT Americans are being attacked by fire, by fists, and are sometimes rejected by those closest to them—something that’s increasingly covered by the media. In the world of confessional YouTube clips and ubiquitous cell phone footage, when coming out goes badly, it can also go viral, finding a sympathetic audience.

Is there ever a time when journalists should out people?

Traditionally, one news requirement (though surely not the only one), has been that the outed individual is living a lie while hurting others: a chest-thumper, for example, working against gays while fishing for sex with them on the side. Think conservative congressman Larry Craig’s outing in 2007 by Roll Call. There is a good case to be made that it is in the public interest to expose a culture warrior with double standards.

And people have made the argument that outing a hugely famous person will help advance the cause of acceptance. Andrew Sullivan introduced an email exchange with Anderson Cooper that was the CNN’s anchor’s official (and sanctioned) coming out moment, by writing: “We still have pastors calling for the death of gay people, bullying incidents and suicides among gay kids… So these ‘non-events’ are still also events of a kind; and they matter. The visibility of gay people is one of the core means for our equality.” Sullivan has previously wondered openly about the sexuality of Supreme Court Justice Elena Kagan, despite denials. “Since when is asking someone about her orientation an ‘accusation’? Is being gay something one is ‘accused’ of?” Sullivan wrote to The Daily Beast.

“I just don’t think the story is about outing at all,” the staffer told me. “It’s such a dumb criticism. There are a lot of dumb people on Twitter.”