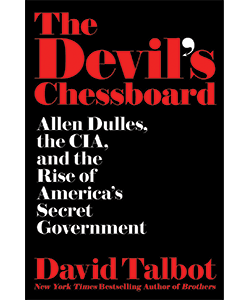 “What follows,” David Talbot boasts in the prologue to his new book The Devil’s Chessboard, “is an espionage adventure that is far more action-packed and momentous than any spy tale with which readers are familiar.” Talbot, the founder of Salon.com and author of the Kennedy clan study Brothers, doesn’t deal in subtlety in his biography of Allen Dulles, the CIA director under presidents Eisenhower and Kennedy, the younger brother of Secretary of State John Foster Dulles, and the architect of a secretive national security apparatus that functioned as essentially an autonomous branch of government. Talbot offers a portrait of a black-and-white Cold War-era world full of spy games and nuclear brinkmanship, in which everyone is either a good guy or a bad guy. Dulles—who deceived American elected leaders and overthrew foreign ones, who backed ex-Nazis and thwarted left-leaning democrats—falls firmly in the latter camp.

Mother Jones chatted with Talbot about the reporting that went into his 704-page doorstop, the controversy he invited with his discussion of Kennedy-assassination conspiracy theories, and the parallels he sees in today’s government intelligence overreach.

Mother Jones: You seem to have a thing for brothers—particularly for younger brothers in the shadow of their more prominent older brothers. As it happens, you yourself have a successful older brother—former child actor and Emmy Award-winning broadcast journalist Stephen Talbot. Do you see yourself in Allen Dulles or in Bobby Kennedy?

David Talbot: No one has pointed that particular analogy out before. But definitely it’s there. I had a very close relationship and still do with my older brother. We both went into progressive media work, and live in the same city still, San Francisco, and have worked together off and on over the years. So I guess I have a feel for what that chemistry is like between brothers.

“His own wife and mistress called him ‘the Shark.’ His favorite word was whether you were ‘useful’ to him or not. I think that you can make a case for Allen Dulles being a psychopath.”

MJ: Given that Allen Dulles isn’t exactly a household name these days, did you feel the need to inject your book with extra drama?

DT: No, because I actually do think the history is so epic that it actually kind of writes itself. Dulles is not a household name anymore. He was at the time, though, particularly as part of this two-brother team. He was on the cover of all the magazines. For a spy, he was kind of a glory hog.

But what I was really trying to do was a biography on the American power elite from World War II up to the 60s. That was the key period when the national security state was constructed in this country, and where it begins to overshadow American democracy. It’s almost like Game of Thrones to me, where you have the dynastic struggles between these power groups within the American system for control of the country and the world.

MJ: Is that why you chose not to include much about Dulles’ childhood or his internal strife or the other types of things that tend to dominate biographies?

DT: I focused on those elements that I thought were important to understanding him. I thought other books covered that ground fairly well before me. But what they left out was the interesting nuances and shadow aspects of Dulles’s biography. I think that you can make a case, although I didn’t explicitly say this in the book, for Allen Dulles being a psychopath.

They’ve done studies of people in power, and they all have to be, to some extent, on the spectrum. You have to be unfeeling to a certain extent to send people to their death in war and take the kind of actions that men and women in power routinely have to take. But with Dulles, I think he went to the next step. His own wife and mistress called him “the Shark.” His favorite word was whether you were “useful” to him or not. And this went for people he was sleeping with or people he was manipulating in espionage or so on. He was the kind of man that could cold-bloodedly, again and again, send people to their death, including people he was familiar with and supposedly fond of.

There’s a thread there between people like Dulles up through Dick Cheney and [Donald] Rumsfeld—who was sitting at Dulles’s knee at one point. I was fascinated to find that correspondence between a young Congressman Rumsfeld and Allen Dulles, who he was looking to for wisdom and guidance as a young politician.

MJ: I’m interested to hear you mention Rumsfeld. Do you think the Bush years compared in ruthlessness or secrecy to what was going on under Dulles?

DT: Definitely. That same kind of dynamic was revived or in some ways expanded after 9/11 by the Bush-Cheney-Rumsfeld administration. Those guys very much were in keeping with the sort of Dulles ethic, that of complete ruthlessness. It’s this feeling of unaccountability, that democratic sanctions and regulations don’t make sense in today’s ruthless world.

MJ: And do you see echoes of the apparatus that Dulles created in some of the debates today over spying on allies and collection of cellphone records?

“I think Dulles would have been delighted by how technology and other developments have allowed the American security state to go much further than he went.”

DT: Absolutely. The surveillance state that Snowden and others have exposed is very much a legacy of the Dulles past. I think Dulles would have been delighted by how technology and other developments have allowed the American security state to go much further than he went. He had to build a team of cutthroats and assassins on the ground to go around eliminating the people he wanted to eliminate, who he felt were in the way of American interests. He called them communists. We call them terrorists today. And of course the most controversial part of my book, I’m sure, will be the end, where I say there was blowback from that. Because that killing machine in some way was brought back home.

MJ: Let’s talk about that. For 500 pages of the book you lay out Dulles’s acquisition and use and abuse of power in and out of the CIA. And then at the end you take a deep dive back into some of the Kennedy assassination conspiracy ideas that you explored in Brothers. It’s not an uncontroversial subject. Did you worry that including that might color the reaction to the rest of the book?

DT: Yeah, you always worry, because unfortunately this climate has been created over the years that discourages and intimidates scholars and journalists and investigators from looking into these dark corners in American life that should be examined. Poll after poll for the last 50 years has shown that most American people don’t accept the official version. The only people who do are the media establishment and the political establishment, at least in public.

To me it’s one of the greatest examples of media incompetence and negligence in American history. I even confronted Ben Bradlee about this, who was probably JFK’s closest friend in the Washington press corps and wrote a book all about JFK and their close friendship. “Why didn’t you, with your investigative resources, try to get [to] the bottom of it?” You should read what he says in Brothers, but basically it came down to, “Well, I thought it would ruin my career.”

I think I have studied this about as much as anyone in my generation at this point, and my final conclusion after 50 years was we have to go there, we have to look at the fact that there’s a wealth of circumstantial evidence that says not only was there, at the highest level, CIA involvement. Probably in the assassination cover-up. But beyond the CIA, because the CIA wouldn’t have acted on its own.

“If you have fears at 63 after a career in journalism like I have, taking the risks I have, then you don’t belong in journalism.”

During the Kennedy period, there was a sense that he’d broken from the Cold War hegemony and that he was putting the country at risk, and that he was a young, untested president. He was maybe cowardly. He was physically not fit. So they just felt, for the good of the nation, that as painful as it probably was to do, he had to be removed. That’s what I think the consensus finally was about him. And Dulles would have been the person, as the executor of this kind of security wing of the American establishment, who would have been given this job.

MJ: Given that exploring these theories has been perceived as a career-killer, did you not have those same fears yourself?

DT: If you have fears at 63 after a career in journalism like I have, taking the risks I have, then you don’t belong in journalism. That’s what journalism should be all about: taking risks and asking the questions that no one else is.

MJ: Alright, last question for you. [Connection cuts out. MJ calls DT back.]

DT: Aaron? There you are. They’re fucking with us again! The NSA!

MJ: The NSA, of course. Okay, so: When the Devil’s Chessboard movie comes out, who should play Allen Dulles?

DT: [Laughs.] That’s a very good question. In fact, the book is being read widely in Hollywood now, and I have no idea. But there have been some interesting suggestions. One is William Hurt, who kind of looks like him now in his older age. You know, to tell you the truth, we’ll see if Hollywood will be willing to take this on. Brothers had a long and winding road in Hollywood. And it was about to go many different times and then the plug was pulled on it. I still think this is kind of a verboten subject in Hollywood, particularly the Kennedy stuff. But, you know, we’ll see. We’ll see if they’re braver with this one.