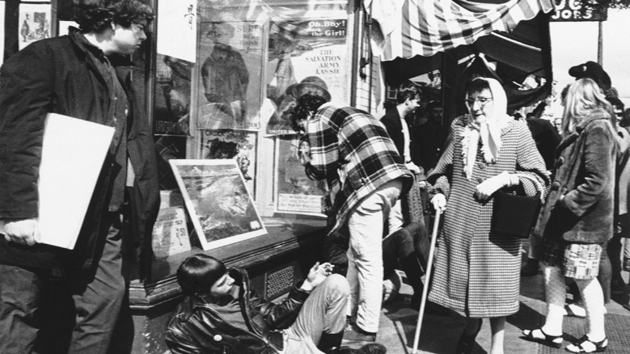 My private tour of the Tenderloin begins outside a CVS on the grittiest stretch of San Francisco’s Market Street. Here at the edge of the city’s most infamous and impoverished neighborhood, the smell of weed and urine waft through the air. Panhandlers mill about, thrusting stained coffee cups at passersby.

As I walk up to the CVS, a warm but unvarnished woman’s voice comes through my earbuds: “Before we get started, I want you to understand something important about the place we’re visiting,” says narrator Kathleen Lee, a Tenderloin resident and former heroin addict. “It’s not an easy neighborhood to get to know.”

In an age of tech-fueled distractions, Detour harnesses the power of the smartphone to immerse people in their surroundings.

The goal of Detour, the local startup that created this “location-aware” audio tour, is to “help people cut through the often impenetrable veneer of a place and really feel what it’s all about,” according to company spokesman Haris Butt. In this, Detour overwhelmingly succeeds, pairing flawless “geofence” programming, NPR-quality content, and, crucially, respect for the locals. In an age of tech-fueled distractions, Detour harnesses the power of the smartphone to immerse people in their surroundings for an hour or two, cultivating a sense of place and empathy for all who live there.

The app was created by Andrew Mason, the eccentric founder of Groupon, after that company ousted him. Intrigued by the popularity of a Groupon deal for an architecture tour of Chicago, and surprised by the lack of good smartphone audio tours while vacationing in Rome, Mason pondered creating a tour app himself. A few already existed in the States, but he envisioned something more advanced—something with high-quality audio content cued by the smartphone’s GPS that would make the experience seamless and let listeners focus on the tour, rather than having to tinker with their phones to find the next turn. 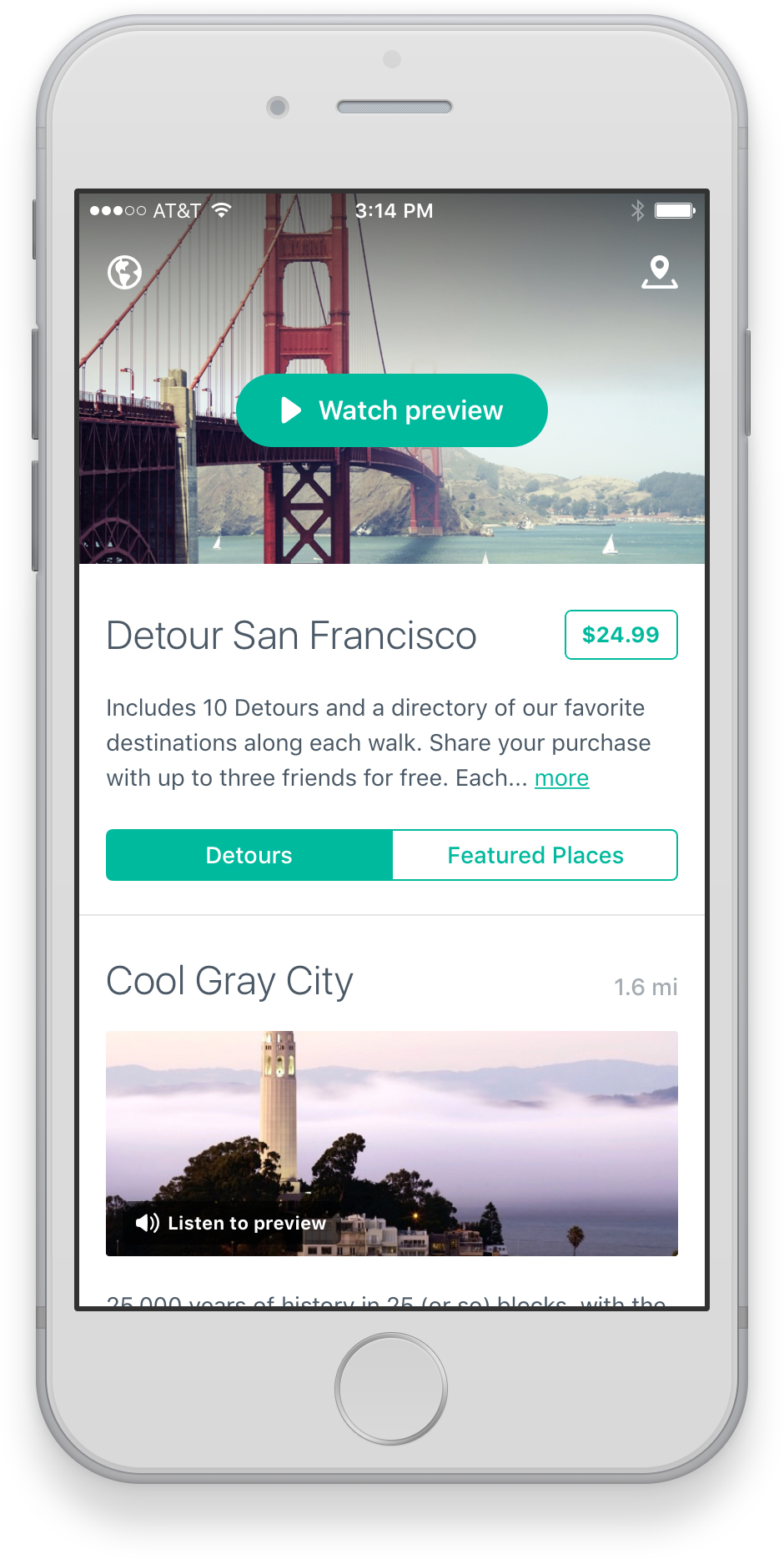 So Mason hired a small team of programmers and veteran radio journalists, and got to work. Detour’s spring 2015 launch made but a small splash, and primarily in the tech media. Since then, however, it has been posting a consistent stream of new tours to download for $4.99—so far, most are in San Francisco, but also in cities such as Austin, Texas—where you can retrace the steps of a serial killer—Barcelona, Berlin, New York City, and Marrakesh.

In the Bay Area, you also can explore the history of the Castro, stroll amid the flora and fauna of Golden Gate Park, revisit the activist history of the Oakland neighborhood that gave birth to the Black Panthers, and, as of this month, revisit the hippie movement that transformed San Francisco’s Haight-Ashbury district in the late ’60s and early ’70s.

The new Haight tour is voiced by veteran film narrator Peter Coyote and produced by the local public station KQED—with whom Detour is also partnering to create tours of Chinatown and the Mission.

In November, Detour also launched a redesign that includes a multi-tour “city guide” of San Francisco; in 2016, they are releasing similar guides of Chicago, Los Angeles, and New York City.

Back in the Tenderloin, narrator Kathleen Lee directs me up a street cluttered with single-resident-occupancy hotels (SROs), where she and many Tenderloin residents live. We proceed past a mural of the neighborhood and its inhabitants, through a church that opens its pews to the homeless during the day, and into the police station to hear officers talk about the challenge of ensuring the safety of the neighborhood’s hundreds of children. Next, we walk past the famous Glide Memorial Church, whose choir, on cue, belts out a jubilant hymn, and to the former Gene Compton’s Cafeteria, where transgender people gathered in the ’60s, when the Tenderloin, not the Castro, was the city’s “gay mecca.” Here legendary drag queen Felicia Flames recounts how, three years before Stonewall, a drag queen threw a cup of coffee in a policeman’s face during a crackdown, instigating the first recorded riot for gay and trans rights in United States history.

“My overall goal is to surprise people into seeing this neighborhood in a new way,” says the producer of the Tenderloin Detour. And “my top-secret goal is to move them.”

My Tenderloin tour was produced by Julia Scott, an award-winning freelancer whose work has appeared on NPR and in the New York Times Magazine. “I lived near the [Tenderloin] for 13 years and more or less avoided it,” she told me in an email. “I was aware of my own judgments of the neighborhood and its most visible residents, and that was why I proposed the project.”

Scott says she spent more than 12 hours with each of the half-dozen featured characters, recording their stories and walking the neighborhood with them. The result is a transcendent 50-minute walk that lets you step into the locals’ shoes without intruding on their lives. “My overall goal is to surprise people into seeing this neighborhood in a new way,” Scott says. And “my top-secret goal is to move them.”

Among the journalists Mason recruited was Marianne McCune, who joined Detour’s staff after leaving NPR’s Planet Money. McCune has produced several Detours, including “Trash,” in which you walk along southeastern San Francisco’s industrial waterfront to learn about the evolution of San Francisco’s waste system. She manages to engage listeners with colorful characters (like a garbage man who worked in San Francisco during the 1960s), historical context (how housewives in the Oakland Hills “saved the Bay” from dumping), and analysis (of San Francisco’s contemporary waste policies). “I very much think of this job as reporting and storytelling,” McCune says, but “place becomes one of you storytelling tools.”

In “Castro with Cleve,” tourgoers experience the history of San Francisco’s gay mecca through the eyes of Harvey Milk’s right hand man.

One challenge, she says, is that “Detours” need to have a longer shelf life than a typical magazine or radio piece. That’s more easily pulled off by focusing on the history of a place. One of the most powerful Detours is McCune’s “The Castro with Cleve.” It takes us to the home of San Francisco’s gay-liberation movement, where Harvey Milk, California’s first openly gay elected official, first opened his camera shop in the 1970s. The tour is narrated by Cleve Jones, who was an aide to Milk during his historic campaign for county supervisor—and who went on to become a legendary gay rights activist and creator of the AIDS Memorial Quilt.

In the tour, Jones recalls arriving in the Castro during the ’70s, and what that was like. He points out old haunts and recounts the marches he organized. He leads us down Castro Street, where he partied and picked up men, and past blocks of houses where he said his goodbyes to countless friends who died of AIDS—at the epidemic’s peak in the 1980s, the Castro’s dead numbered some 2,000 per year.

According to Jones, McCune “coaxed me to tell the often-painful stories of my youth and arrival in San Francisco. She made me remember past lovers, dear friends and comrades. She spent hour after hour walking all around the Castro, talking not only with me but also with passersby, neighbors, and shopkeepers. At every encounter she was respectful but persistent and eager to hear every story she could find about this unique and wonderful neighborhood that has been my home for most of my life.”

Through the careful choice of routes and close attention to its subjects, Detour has expanded the definition of what a walking tour can be. The company sees it as a medium for “education, art, entertainment, journalism,” according to Butt, Detour’s spokesman. “Five years from now, we hope that anytime you travel, Detour is an essential part of how you experience that place.”

“Outsiders think of the Tenderloin as a problem that needs to be solved, but it’s also a place where people come to live.”

But the app can change how you experience your surroundings even at home. And that’s key in a place like San Francisco, where a neighborhood’s history can fade with the speed of a new condo development going up. In the Tenderloin, an island of low-income housing in a sea of gentrification, residents are feeling the pressure—many are getting evicted from the residential hotels that have kept them off the street.

If you didn’t know any better, you might think renovating these dodgy lodgings would be a good thing—until you hear the stories of residents like Kathleen Lee. “Outsiders think of the Tenderloin as a problem that needs to be solved, but it’s also a place where people come to live and pay rent and solve our own problems as best we can,” she says on the audio tour. “We’ve made this our home and have been, I must say, embraced.”