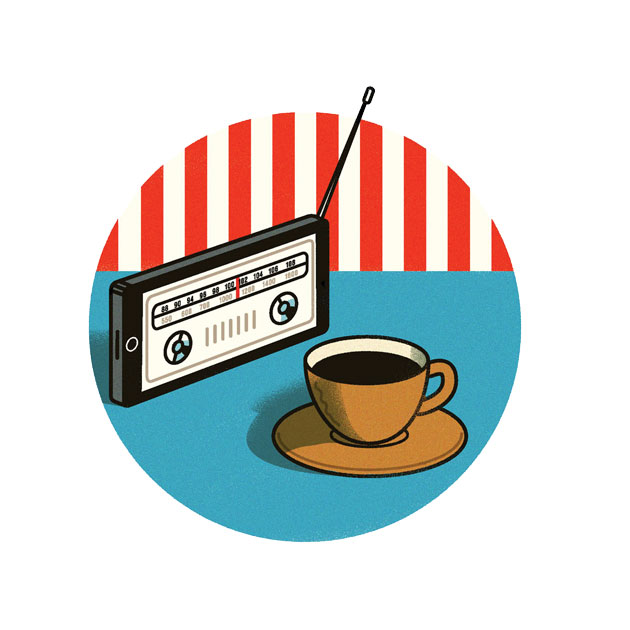 Despite a successful career in public radio, Alex Blumberg says he never showed any “entrepreneurial spunk.” That changed when he left a comfortable post at NPR’s Planet Money and, together with Matt Lieber, began to court venture capitalists to help launch a podcast incubator. The resulting company, Gimlet, has attracted at least 4 million monthly listeners and $1.5 million from investors. Its portfolio of highly produced shows includes StartUp (the first season told the inside story of starting up Gimlet); Reply All, which takes on internet culture; and Mystery Show, in which host Starlee Kine solves seemingly trivial problems. Surprisingly Awesome, the newest show, sets out to make dull topics, like free throws or mold, interesting; it’s the brainchild of Adam Davidson, Blumberg’s former cohost at Planet Money, and filmmaker Adam McKay. Blumberg talked to Mother Jones about the biz.

Mother Jones: Why leave a comfortable job at Planet Money to go off on your own?

Alex Blumberg: I don’t know. Why do we do anything? [laughs]. I was 40-something years old. I hadn’t shown any entrepreneurial spunk up until that point. I thought that there should be a way of identifying talent and then helping that talent make shows and those shows find audiences. I kept on thinking, well, somebody should do it and waiting around and no one did.

“I was 40-something years old. I hadn’t shown any entrepreneurial spunk up until that point.”

MJ: What did Gimlet look like back when you launched StartUp with Matt Lieber?

AB: We didn’t really have an office. So we had these two business calls, I remember, where we were both walking around the streets of Manhattan on our cell phones like a block apart from each other. Every time a siren would go by, it was just awful. So we finally we paid for a place in an incubator. Two little chairs and a desk. StartUp launched and went pretty well, and that helped us raise the rest of the money.

MJ: You’ve describe Gimlet as “the HBO of podcasting.” What did you mean by that?

AB: Right now, there are lots of podcasts that are cheaper to produce, and many of them are great; I love a great “friends shooting the shit” show. But where there’s an opportunity is in the more highly produced way, where you are reporting and sifting stuff out and cutting, honing things. I come from that. I feel like those take more work and you’re polishing them a little bit longer, fussing with them a lot more. That’s sort of why I said HBO of podcasting: We’re not going to produce tons of it, but the content we produce, we’re going to try and make it stand out in some way.

MJ: Did you expect StartUp to do so well?

AB: I didn’t expect it to strike that kind of chord with the number of listeners that it did. Like, ‘Oh my God, you are describing the journey that I’ve been on making my productivity app,’ or whatever. There are tons of businesses that exist in the United States. An insane number of people who are in business for themselves. And then there are people on board feeling they’re at key early stages of companies. So I think there are a bunch of people who can sort of relate to the feelings of it, but hadn’t really heard those feelings brought out before.

Reply All: “The Man in the FBI Hat”

MJ: What do you learn about your own company’s journey by looking at Dating Ring’s journey, as you did in season two?

AB: We were able to raise money much more quickly than they were. It felt like it took forever at the time, but then talking to Dating Ring and talking to other start-ups—we were a little bit of an anomaly.

The other thing was that being old wasn’t such a bad thing. [laughs]. When I was 25, I felt all this pressure to succeed, and I’m keenly aware of who’s ahead of me and who was behind me—and it fucks you up! With me being in my 40s, I knew who I was.

MJ: Gimlet started at an interesting time, at this golden era of podcasting—46 million Americans listen to at least one podcast in a given month. Do you think it’s just a fad, or is it here to stay?

AB: Radio was supposed to die in 1945, when TV came along. It turns out that radio grew and grew, and it’s a bigger business today than it has ever been. People really like to listen to other people talk; sometimes listening is the only thing you can do. Audio is the only medium you can consume while you’re multitasking. Now that everybody has a smart phone and everybody’s car is going to be connected, it’s a brand new world.

“Radio was supposed to die in 1945, when TV came along. It turns out that radio grew and grew, and it’s a bigger business today than it has ever been.”

MJ: What do you think people get from listening instead of reading or watching media?

AB: I think people want companionship. Radiolab is sort of like hanging out with the hosts. They’re like friends you want to have that are like teaching you stuff and they’re telling great stories.

MJ: Public radio has this reputation of having the predominantly white, male voice. How do you plan to tackle diversity at Gimlet?

AB: It’s something that I think about pretty much every day. How do we make it a non-homogenous place technically? Right now, it’s not. Podcasts should look like America. And I feel like, ideally, that’s what you’d want your company to look like. I think that’s right and makes sense from a business perspective.

MJ: How do you guys plan on doing that?

AB: You start to realize why companies in the beginning look the way they do: You’re drawing from your own personal connections when you’re starting something. You see it in small businesses all over. One ethnic group has a store franchise and then like the one that opens is a cousin. When you’re launching a business, you just really want to know somebody deeply to help in how you do it [laughs]. We recruit people. We’re trying to train people up. We’re reaching out to this interesting alternate world of the non-public radio podcasters who just come to podcasting because they like podcasting.

“One of the things that I think audio is best at is creating empathy.”

AB: One of the things that I think audio is best at is creating empathy. I know that might sound a little crazy but I actually truly believe it. When you’re hearing somebody and you’re not seeing them, your brain naturally creates a version of them. Then you feel closer to them because you’ve created them. You’re not sitting back and judging them, saying they look different from me on a subconscious level. Some of the shows we’re planning in particular are going to be conversations between all kinds of different people that are a lot about trying to create empathy.

MJ: How did your newest show, Surprisingly Awesome, come about?

AB: I’d worked with Adam Davidson at Planet Money for many years and knew what an incredible talent he is. And also Adam McKay makes really funny movies, and I thought, the show they wanted to do will be in a nice sweet spot for podcasts in general. A lot of people listen to podcasts because they want to learn something and be entertained along the way, and I feel like this is perfectly in that zone.

MJ: What’s a topic that the show would cover?

AB: Free throws. A free throw seems boring but then when you sort of dig into what’s going on and the history and psychology and the social anthropology around the free throw—it’s interesting.