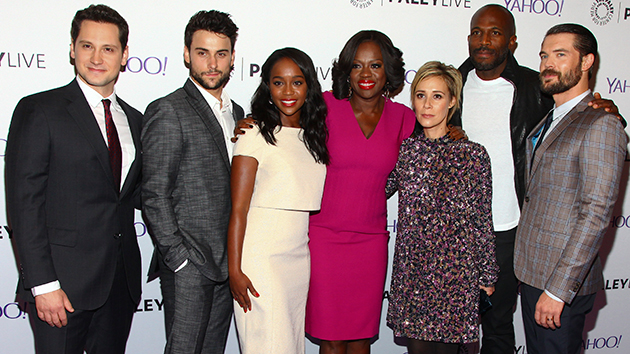 The cast of "How To Get Away With Murder."Photo by Andy Kropa/Invision/AP

You should be watching How to Get Away With Murder, the ABC legal soap opera, for lots of reasons. The first and best reason is Viola Davis’ performance as the egomaniacal lawyer, Professor Annalise Keating. (Davis was the first black woman to win lead actress in a drama at the Emmy’s last year.) But if you want to see all the reasons distilled into one clip, watch the seven-minute pre-title from the second season’s penultimate episode, “Hi, I’m Philip.”

Let’s back up a second. If you haven’t binge-watched this show already, the premise is pretty silly. Davis is a powerful Philadelphia criminal defense attorney with dubious ethics who somehow finds time to instruct a college law class while taking on insanely complicated murder cases with a group of her prize students whom she has recruited as interns at her law firm. All of Annalise’s student workers, plus her two employees, are locked in a variety of exploitative and sometimes sexual power struggles as the group races to keep a lid on a mind-boggling number of cover-ups and murder plots.

The clip in question comes at the start of the second-to-last episode of 2015, as our compromised heroes—entangled in their own sexual escapades—battle to stay on top of a mounting crisis before the mid-season finale. (You can download the episode on iTunes, or stream on Hulu or Amazon.)

Spoilers ahead: Set to the dark nightclub beats of “Ghost,” by electronica band The Acid, the writers weave together multiple plot lines from the series. There’s Davis’s Annalise, shorn of her sleek wig, being confronted by her cop ex-lover, Nate, whom she framed in season one for the murder of her husband. He’s drunk, surly, and needy, and he toys with Keating’s emotions in what’s clearly set up as a late-night booty call. The scene pulses with sexual chemistry and longing. Keating, in a red satin dressing gown, wants him—that’s obvious. “I’m making you nervous,” he says, in a deep growl. She can barely talk. But she’s not going to give it up just like that.

Where other writers might let Annalise cave into Nate’s sexual advances, portraying the hookup as inevitable, in this TV show the tables are turned with this lovely feminist nugget: “You need to decide whether you want to forgive me. I said I was sorry, and I meant it,” Annalise says. “But I’m not gonna spread my legs as some sort of payment.” She makes him sleep on the couch.

Even if she’s flawed, she’s always in charge. 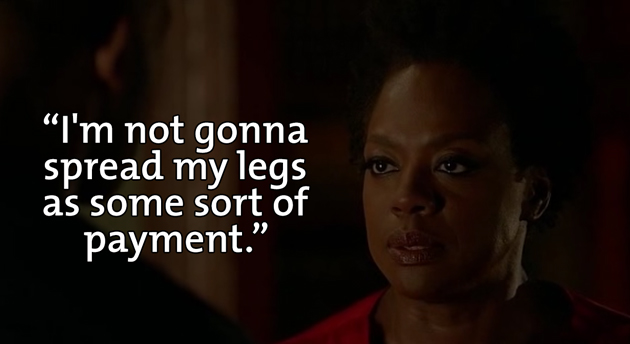 Meanwhile, a group of Annalise’s students are driving home, having failed to secure the DNA of an alternative suspect in the season’s main case. But that’s just context. What’s really driving and dividing the characters is a fight about race and class.

Frank, Annalise’s main henchman, blames Laurel, the intern student he’s screwing, for messing up their secret trip to get DNA. “I’m pissed because you tattled to the teacher like the spoiled little M.A.P. you are,” he snaps.

Someone in the car asks what’s a M.A.P.? “A Mexican American Princess,” Laurel explains, pissed off at the pejorative. “I’m actually surprised someone who barely left Fishtown even knows the term.”

It’s all deliriously fast and would itself be enough to keep me humming along contently, chuckling at all the modern little jokes. But this scene is just the setup for an even better punch line, delivered by the show’s main gay character, Connor, who is also in the car. Unlike most TV “gay zingers,” it’s not self-deprecating or fawning or coy or camp. It’s a direct attack.

“You know,” Connor tells Frank and Laurel as he’s getting out of the car. “You two are the perfect example of why straight people shouldn’t be allowed to breed.” 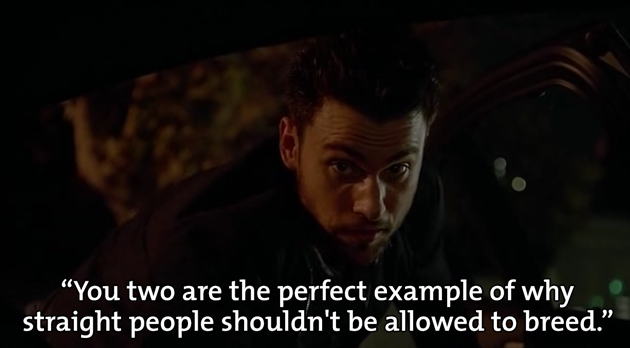 And we’re only seven minutes in. On network television!

Much has already been written about Annalise Keating, the character, and how she breaks TV molds, by being a powerful, intellectual and intimidating African-American female antihero, like her predecessor on Scandal, the fixer Olivia Pope. (The connection between the two is Shonda Rhimes, Scandal‘s creator. Here, she’s an executive producer.) But in this clip, there’s intimacy, sadness, vulnerability, even weakness from Keating, and a deep internal struggle. (I guess that’s why Davis has been nominated for a 2016 Golden Globe for her role in the show.)

And that’s what makes this show so great. There’s not simply a modern mix of diverse identities in the cast—gay, straight, black, white, brown, privileged and poor—but real diversity in their interactions; they refuse to be cliches as they act at odds with each other,  against their own interests, and against type. This kinetic energy produced by hurling diversity around is so fun, so exhilarating, and absurdly addictive.

The show returns for the second half of Season Two in February.