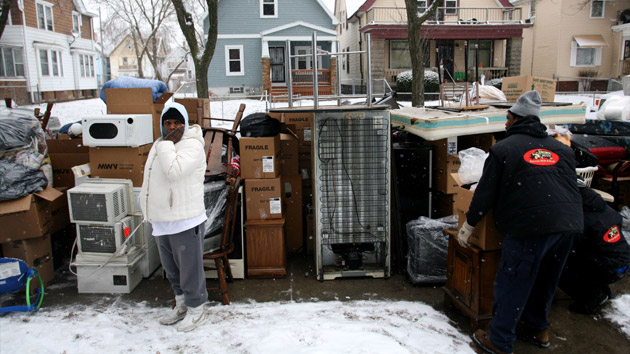 Ara Sparkman, 40, looks over her belongings after getting evicted in Milwaukee.Sally Ryan/ZUMA

On the North Side of Milwaukee, Arleen’s struggle to raise her two boys as a single mom on $628 a month ends in an eviction notice. On the South Side, a grandmother named Larraine* can’t pay to heat her trailer, falls behind on the rent, and is eventually kicked out. The mark of eviction remains with both women long after they’ve been forced from their homes, their possessions hauled out on the street.

In his new book, Evicted: Poverty and Profit in the American City (out March 1), Harvard sociologist Matthew Desmond introduces us to Arleen, Larraine, and others struggling with the consequences of getting tossed from their houses—a situation that disproportionately affects urban women. “If incarceration had come to define the lives of men from impoverished black neighborhoods, eviction was shaping the lives of women,” Desmond writes. “Poor black men were locked up. Poor black women were locked out.”

“If incarceration had come to define the lives of men from impoverished black neighborhoods, eviction was shaping the lives of women.”

Desmond conducted his immersive, ethnographic fieldwork in Milwaukee for a little more than a year, living in a trailer park in the city’s South Side and a rooming house in the North Side. He went on eviction ride-alongs with landlords and saw tenants and their possessions kicked to the curb. He sat with tenants in eviction court, where they wondered why they were getting kicked out. And with a crew of researchers, the 36-year-old researcher spearheaded the Milwaukee Area Renters Study, an extensive examination of the city’s residential history that also offers a detailed look at urban poverty and evictions.

As a result, Evicted is a rich, empathetic feat of storytelling and fieldwork, one that Barbara Ehrenreich hails as “a new standard for reporting on poverty.” I caught up with Desmond last week to discuss the costs of getting evicted, why kids don’t protect parents from eviction, and what we can learn from the families on the margins. Here are six takeaways:

The face of the eviction epidemic are moms and families: “It’s incredible that 1 in 8 renters in Milwaukee experience some sort of eviction in the course of two years,” Desmond told me. “It’s amazing that 1 in 5 African American women renting in the city report being evicted some time in their lifetime. So, the face of the eviction epidemic belongs to moms and kids, and it has a disproportionate effect on low-income African American women and low-income Latino women. It mirrors incarceration in certain ways. Eviction comes with a record, too, and just as a criminal record can bar you from receiving certain benefits or getting a foothold in the labor market, the record of eviction comes with consequences as well. It can bar you from getting good housing in a good neighborhood. Ironically, it can prevent you from receiving housing assistance. Arguably, the families most at need of housing assistance are systematically denied it because they’re stamped with an eviction record. Moms and kids are bearing the brunt of those consequences.”

“When I started this research, I thought kids would be a shield from eviction…But it’s really the opposite.”

Landlords consider kids to be a liability: “When I started this research, I thought kids would be a shield from eviction, that there would be some protections built in to help parents resist or protect them from displacement and homelessness. But it’s really the opposite. Kids increase people’s risk of eviction. We talked to about 250 people in eviction court in Milwaukee because we wanted to know: What explains why you get evicted and I don’t, when we both show up to court? And the big answer is kids. Kids! If I lived with kids and you didn’t and we owed the landlord the same thing and we had the same income and our racial and ethnic identity are the same, I would have a three times more likely chance of getting evicted than you. What you’re seeing there is not the judge’s discretion or the commissioner, but the landlord. So kids can cost landlords money. They can get lead poisoning. They can draw the ear of the police if they are teenagers. Child Protection Services can get all up in your business if you have kids. Just strictly from a business standpoint, kids are a liability to landlords, and they actually provoke evictions.”

The consequences of evictions go far beyond having shelter: “Families not only lose their home, but their possessions, too. Often, they are taken by movers, locked up, and lost, or put on the curb. People’s stuff just get lost. People obviously lose their communities and schools. Then there’s these consequences that I just didn’t anticipate, like job loss. I thought going into it, ‘You lose your job, you’re getting evicted.’ That’s certainly true. But we have strong evidence that you get evicted, you’re much more likely to lose your job. It can kind of take over your life. And if you’re working in a sector of the labor market where you don’t have a lot of security and a lot of protections, an eviction can cause you to get fired. And then there’s the effect on your health—your mental health, your spirit. Moms that get evicted are depressed and have higher rates of depressive symptoms two years later. That has to affect their interactions with their kids and their sense of happiness. You add all that together, and it’s just really obvious to me that eviction is a cause, not just a condition of poverty. It has to be part of the larger narrative that we are having today about inequality in America.” 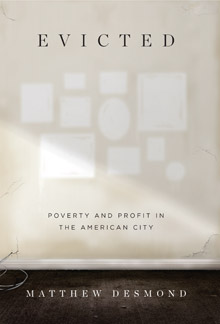 Displacement doesn’t only happen in gentrifying areas: “Many times when we are talking about displacement, we talk about it within the frame of gentrification, which focuses on transitioning neighborhoods. But man, every city I’ve looked at, Milwaukee included, most evictions are right there, smack dab in ungentrifying, poor, segregated communities. So that’s a big part of the story. But you know, this is a problem that’s not just focused on the inner city or communities of color. This is a very broad story. If you go to eviction court, you are going to see a lot of moms and kids. You’re going to see older people, too. You’re going to see young, white families. You’re going to see folks from immigrant communities. The problem of affordability and housing has stretched into a lot of regions in the country. One in five renters are estimated to be paying at least 50 percent of their income to housing now. It was important to write about a trailer park and things that folks in those communities are going through, because poverty and eviction lives there too.”

A universal voucher program could give people in extreme poverty a chance: “The book argues for universal voucher program. It’s basically taking our current voucher program, which allows folks to pay only 30 percent of their income to housing and the voucher covers the rest, and they can live wherever they want as long as their housing isn’t too expensive or too shoddy—taking that program and expanding it would be a huge game-changer in the face of poverty in America. It would reduce family homelessness. It would make evictions rare again. It would allow families to use their freed-up income to take night classes or invest in their homes, invest in their kids. One very common thing families do when they finally get the housing voucher after years on the waiting list is just go buy more food. Their kids get enough to eat. They become better nourished and strong. But kids like Arleen’s kids don’t get that opportunity because their rent eats first. We do not have to reinvent the wheel on this one. There are countries in the developed world that have a universal affordable housing program, and they usually execute that through vouchers—Denmark, UK. There’s groundwork for this that’s already laid. There’s a reason that vouchers are used instead of building public housing. It’s way more efficient and would allow us to avoid the mistakes of our past about shoring up racial segregation, for example, or economic concentration of poverty by building these huge towers.”

We should focus more on housing policy: “I want readers to take away Arleen. Here’s this mom who’s just trying to do right by her kids but has to choose between paying the rent or buying them school supplies. I want them to take away Larraine, this grandmother living in a trailer park that sees her breath inside her trailer because she can’t pay rent and pay the heat bill. I want them to remember folks like Vanetta who are pushed into this desperate situation and commit a crime to keep her kids from living out in the streets. I want them to carry those stories, and to remember that somewhere in their city, a family has been thrown out of their home and their stuff has been piled on the sidewalk. I think that those stories and the statistical analysis point to one firm conclusion: Housing is deeply implicated in causing poverty in America today, and we have to do something.”

Correction:An earlier version of this article misspelled the character Larraine’s name in Evicted.