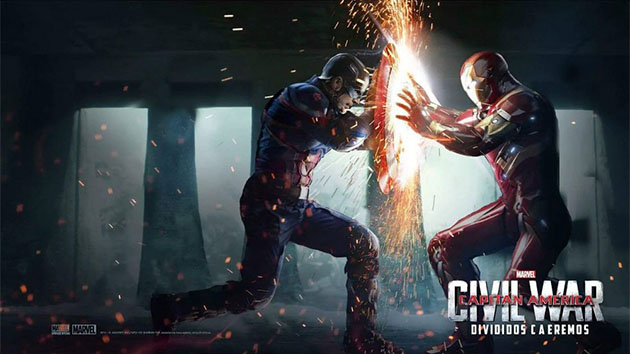 When last we saw our friends from Marvel, they were doing…something. What was the last film? Ant-Man? I don’t really remember much about Ant-Man, except that Paul Rudd fought the drug-addled congressman from the first season of House of Cards.

So here we are now in a bold new world, post-James Spader rampage.

Thor and the Hulk and some other pals seem to be off somewhere, but the rest of the team is up to their old tricks. In the beginning of Captain America: Civil War, the eponymous main superhero leads what could be called “The Avengers: The New Class,” including Wanda Maximoff (the Olsen sister who has witch powers), The Vision (aka Paul Bettany’s sex robot), and Captain America’s buddy Falcon (Anthony Mackie), as they head to Africa to kill some Hydra member of no particular importance. One thing leads to another, and civilians die.

The world will not stand for this. (Sad truth: The only time when the world won’t stand for civilian death is when it comes to superhero films.)

So leaders of the world get together and pass a treaty to combat climate change incorporate the Avengers into some sort of United Nations command structure.

Captain America is not thrilled with this idea because Captain America doesn’t need some bureaucrat in Brussels to tell him when to right a wrong. (Also, and coincidentally, his best friend—the Winter Soldier, aka Bucky Barnes, being played by Sebastian Stan—is a fugitive superassassin on the run.) Tony Stark, having been chastened by the events of the second Avengers film—it was him, after all, who built James Spader and was ultimately responsible for the deaths of all those fictional Europeans—sides with the pro-regulation (anti-Captain America) team. Voila, tension. Plus, not only does Tony Stark not wear his Iron Man suit very often, he doesn’t even tie up the tie on his normal suit all the way. It just sort of sits there, loosened.

Then when the powers of the world gather to sign the “Sit on it, Captain America” act, there is—surprise!—a terrorist attack. In superhero movies, world leaders are not allowed to gather without there being a terrorist attack. (Every superhero film is the way a young Dick Cheney imagined every prom night would be: Everyone’s very attractive and there’s a terror attack.) One of the world leaders who perishes is the King of Wakanda. Chadwick Boseman, as the slain king’s son vows to avenge his father.

Throughout this film, people often say to Captain America, “Should we tell Tony Stark about this new and revealing information?” And Captain America says, “That neo-liberal shill wouldn’t understand.” Everything could be sorted out if they just talked, and there’s a perfect place to do so in the second act. But of course, this is a Captain America movie, and Captain America is the star and he gets to be right despite obviously not being right. The film goes to great lengths to make Captain America accidentally correct about a lot of things. The choices Captain America makes when he is making choices are bad choices but the film flips over itself to justify him by sheer luck. In this film, Captain America fails upward.

My main problem with this movie: Captain America is sort of just a selfish hypocrite. Also, boring. And he isn’t even super. (He is strong, though.) And he could just be shot with a bullet. (There are a bunch of times in this movie when he loses his shield.) His whole team, in fact, save the Olsen twin who is a Witch, could just be shot to death by any old infantry unit.

Also, with so many superheroes in this movie, writers clearly had to find reasons to peel them off. Black Widow (Scarlet Johansson) just sort of shrugs and walks away after one fight. I have no idea where Vision went after the second act. As far as I can tell, no explanation is made for why he is gone. Falcon, War Machine, Spiderman, Ant-man, and Hawkeye are all given some nonsense dialogue to deliver about why they are crapping out, but Vision just sort of ghosts out. Of course, they have to peel off so we can have Tony Stark fight Captain America.

No surprise: They are all being tricked into fighting each other by some shady German character (the dude who played the other race car driver in the 2013 film Rush) with dubious motives, but that’s because it doesn’t matter. Here’s the most surprising thing: It isn’t a bad film! It’s enjoyable, even. When the Avengers actually fight, it’s fun! The movie’s themes and those of the infamously brooding Batman v Superman: Dawn Of Sadness seem somewhat interchangeable, but at least Captain America: Civil War rolls them out with Marvel’s trademark humor.

Best of all: Spiderman and Black Panther! I’m looking forward to seeing their movies!