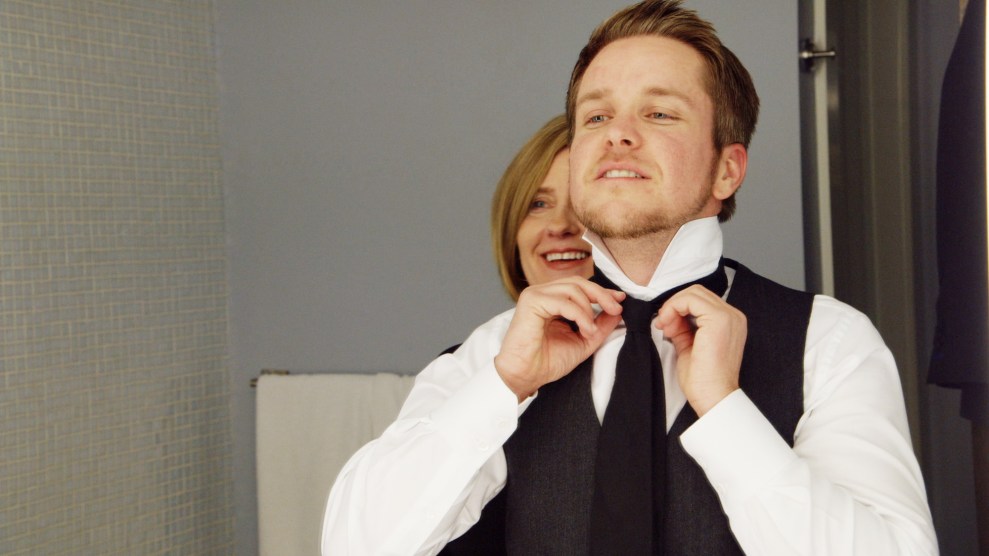 Derek Matteson, a transgender male nurse, gets ready for his wedding. Courtesy of HBO

If you’ve ever gone clothes shopping after gaining some weight, you might be familiar with the particular dread the experience can stir up: You sift through the racks and face your reflection in a full-length mirror, feeling like every piece of clothing is accentuating things you wish you could hide. For transgender and gender-nonconforming people, the feeling goes even deeper. “I would be thrilled about encountering these on anyone but myself,” says writer Grace Dunham, glancing down at at her T-shirt-covered breasts, which she says are “extraordinarily beautiful” when she’s not binding them. But “that doesn’t mean they feel good.”

Suited, a new documentary premiering on HBO on June 20, tells the story of a Brooklyn-based tailoring company, Bindle & Keep, that makes custom suits for transgender and gender-nonconforming clients. Co-produced by Lena Dunham (of Girls fame), the film is most moving in its depiction of the complicated lives of clients like Grace—Lena’s kid sister—and five others who have long struggled to find the right fit.

Among them is Everett Arthur, a black transgender male law student and cellist who needs a new suit for job interviews. “I want to be stealth,” he says, sporting a red, white, and blue flannel bow tie. He wants to hide his curves and the fact that he was born female, he says, partly because an employer recently told him he was qualified for a job but couldn’t be hired because he was transgender.

“The problem is like, did I want to be a boy, or did I just want to be treated like a boy?”

Then there’s Aidan Star Jones, a 12-year-old trans boy from Arizona who shows up to Bindle & Keep with his grandmother—looking for something to wear to his bar mitzvah. With emo-style black hair and hipster glasses, he shrugs and stares at his feet frequently: “I’m just nervous, I suppose,” he tells the tailors. He’s never looked good in clothes and is afraid this suit will be “more of the same.” He takes a sip of water and clutches a stuffed dinosaur after explaining that his dad doesn’t support his gender identity and he doesn’t have many friends at school. 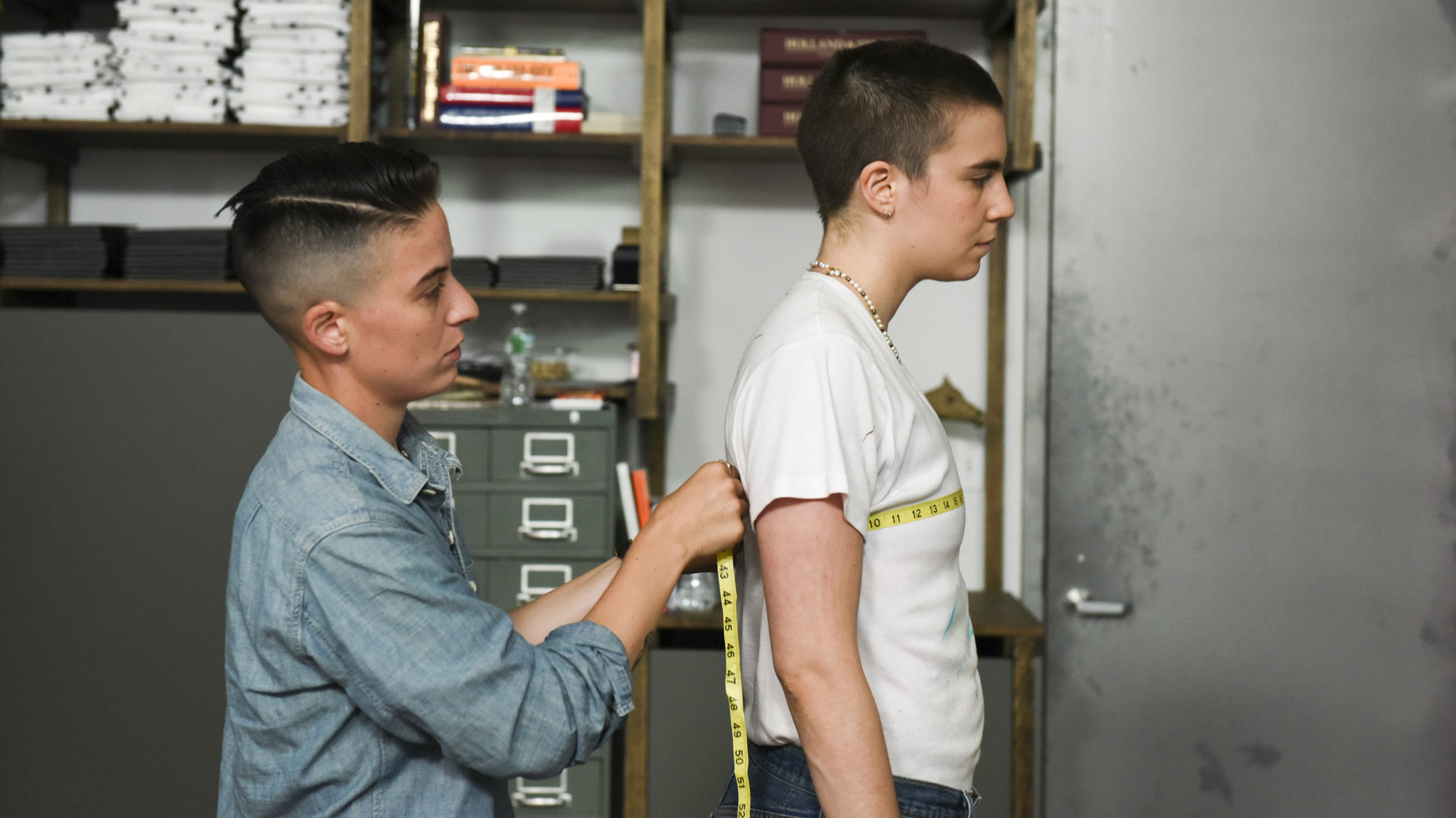 Suited‘s director, Jason Benjamin, approached Lena Dunham about the documentary after reading a profile on Bindle & Keep in the New York Times. Bindle & Keep’s founder, Daniel Friedman, who is straight and cisgender—meaning he identifies as the gender of his birth—had originally intended to cater to Wall Street businessmen. Then he met Rae Tutera, who convinced him to make masculine suits for people like her who don’t identify with their feminine curves. They began working together, and now serve hundreds of clients with a range of identities—from a trans-male nurse preparing for his wedding to a trans woman attorney looking for a conservative suit to wear when she argues a case in front of the 11th Circuit Court of Appeals.

“Fashion is universal. Everybody has to get dressed. Everybody has to be comfortable in their clothing,” Lena Dunham told the Hollywood Reporter. “We all live in this complicated world where we are navigating our own relationship to our bodies, and to what’s been assigned to us culturally and what our own desires are.”

The film asks us to consider tough questions as its characters talk candidly about their lives. “When I was a kid, I did fucking want to be a boy,” says Melissa “Mel” Plaut, 39, a gender-nonconforming cabbie. “The problem is like, did I want to be a boy, or did I just want to be treated like a boy? Right, like treated the same way the world treats boys, but still be okay to be me? And that where I think I’ve landed.” Mel, who’s in the market for a suit for a birthday celebration, recalls fighting to get out of frilly dresses as a kid and into Metallica T-shirts and skin-tight jeans as a teenager. Female pronouns don’t sit right, but neither do male ones: “I don’t feel like any of it quite fits.”

When people have been struggling their entire lives and they finally get into something that really fits them…That’s not fashion anymore.”

Some of the most touching moments come during interactions with family members, such as when Derek Matteson, the nurse, hugs his gray-haired mother before going under the knife for a hysterectomy, or later knots his father’s tie before getting married to the love of his life. Or when Aidan, the 12-year-old, comes back for a fitting with his dad, whose cutoff denim vest reveals tattooed arms. “You look sharp,” he says to his son, who’s smiling in his new suit.

“It’s all about just feeling great in your body,” explains Bindle & Keep’s Friedman. “Especially when people have been struggling their entire lives, and they finally get into something that really fits them, that really fits them the way they’ve always envisioned something would fit them. That’s not fashion anymore. And that’s what we’re after.”

Suited premieres at a time when Americans are growing more aware of transgender issues, with Caitlyn Jenner coming out and ongoing battles over which bathrooms trans people are allowed to use. But it doesn’t matter whether you’re trans or you know someone who is or you only just recently learned what the word “transgender” means. The film is a testament to the courage of embracing who you truly are, whoever that may be, and a poignant reminder that one size rarely fits all.